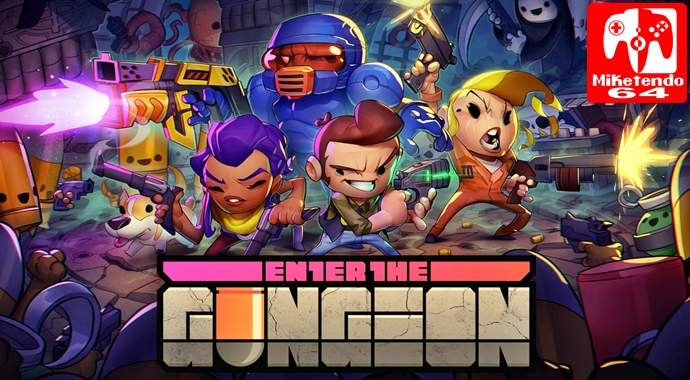 Roguelike is a game genre that has been around for quite a long time, but never really resonated so well with Western audiences. However, with the advent of the increasing access and interest for indie games, developers started mixing this genre with others, creating games that became very popular in the West, such as Spelunky, FTL: Faster Than Light, and Rogue Legacy.

The Binding of Isaac, may be one of the finest examples, spawning a long life, including the remake and expansions. I have played it for many hours across Steam and Switch. Years later, Enter the Gungeon was announced and when it released, it became a YouTube sensation and caught a lot of attention, including mine. At a first glance, I saw a few similarities with Isaac, so immediately, I wanted to play it and thanks to the Nintendo Switch, I have, but was the wait worth it? Is Enter the Gungeon worth it? That’s what we’re going to find out, right now!

Enter the Gungeon is a bullet hell roguelike game developed by Dodge Roll and published by Devolver Digital in 2016, initially for PC and PlayStation 4 but then ported to Xbox One and Nintendo Switch in 2017. Only instead of the ports solely consisting of the game, they also come with all the free content that was released since Enter the Gungeon’s debut, with the promise of even more to come in the beginning of 2018, in the form of the Advanced Gungeons & Draguns Update.

Storywise, the game’s premise is simple and sets the idea of why you are entering the Gungeon: If you are able to get to the end of the fortress, you will find a gun that is so powerful that it is able to kill the past itself. Going through the dungeon and coming out the other side though, is another story altogether, as there are plenty of Gundeads, who are all willing to kill you. So, as the player, you have to take control of one of 4 characters, each one armed with a valid reason as to why they want to change the past and do your upmost to get to that gun alive. This story, especially the initial cut-scene to set the scene, does the game justice and acts as extra motivation to seeing Enter the Gungeon through from start to finish.

As well as the four playable characters having their own reasons that drive them, they also have their own different guns, active and passive items, and backgrounds that you can discover when playing as them. Naturally, because of these differences, each character does have a unique playstyle, so when playing Enter the Gungeon, your best bet is to try out each character once, in a bid to see which one suits you best. Although, if you are fortunate enough to play with a friend thanks to supported co-op, there is an exclusive fifth character, who comes with her own perks and background story that adds even more to the game.

Visually speaking, this game presents a beautiful pixel art that suits the game well and allows you to maintain your focus on the action, without losing track of an enemy and failing to see a projectile coming your way. They also allow for instant recognition of the enemy you are facing, as each have a detail to differentiate their bullet appearance. I especially liked the design for the weapons and items you find throughout the game as each is unique in its design reflect their names and uses. To complement it even further though, the audio design is very good, creating an appropriate atmosphere for your adventure all throughout.

Although the story and visuals are good, what really makes Enter the Gungeon shine, is the gameplay. The roguelike aspects of it are very similar to The Binding of Isaac: you go through a series of rooms that are randomly organized, defeating the enemies, finding items and chests with items to upgrade yourself and your gun, while looking for the boss that when defeated, will allow you to go to the next floor. Where Enter the Gungeon differentiates from its inspiration though, is in combat. In Enter the Gungeon, you have to shoot at your enemies while they shoot a bunch of projectiles at you, and I mean a big quantity of them, just like in a bullet hell game. To avoid that, you have two mechanics that are incredibly helpful and necessary to continue: blanks that you have a set number and they eliminate all the projectiles on the screen, and the Dodge Roll, which allows you a fast movement in a selected direction and while you are in the air, makes you invincible.

Until you master this gameplay (and even after you do), you will die. A lot. But thanks to the randomization, each gameplay section is unique and since the gameplay is addicting, you will always want to play “just one more.” Even if you have to start again when you die, things like rescuing a few characters and collecting a specific coin, don’t reset with a new playthrough, which means some of your progress carries over and you can pick up where you left off and unlock new items and guns with the coins you collect. This makes each attempt have meaning and helps the game to become even better and more addicting, the more time you put into it.

As for the controls, they are similar to a twin-stick shooter, in which you control your character with the left stick and aim your gun with the right stick, whilst shooting with the R button. The L button is used to Dodge roll your way out, while the ZR uses the special weapon and ZL opens the map, which allows you to see the area and travel to already cleared rooms. Finally, by pressing both sticks, you use the blank. The controls work wonderfully with the game, with the default setting being the easiest to use, but you can change them if you wish to do so. Just remember, the option of mapping buttons becomes essential when playing with one Joy-Con, as I felt that the motion controls didn’t really click with me, but remapping and disabling the motion controls helped a little.

Lastly, as far as performance goes, the game runs very well on the Switch no matter if you choose to play it on your TV or in handheld mode, as it maintains the beautiful view and frame rate in both modes. I only saw a few hiccups that didn’t last more than one second and only really occurred when I was going to another room, so it never spoilt the fun by interrupting important gameplay. Also, although very subtle, there is HD Rumble support present and it is done well.

Enter The Gungeon is a game that everyone should try for themselves, as its addicting gameplay will certainly make you want to keep playing it, because it’s one of those game that will have you reciting the mantra “just one more game.” Enter the Gungeon is a match made in heaven for the Nintendo Switch, as playing it on the go means you can pick up and play at any time you desire to do so and the promise of more free content and hours of gameplay, makes it even more alluring, so if you don’t have it yet, you should!