Who Needs Heroes when The Rivals Come to Mighty Gunvolt Burst on December 28th! 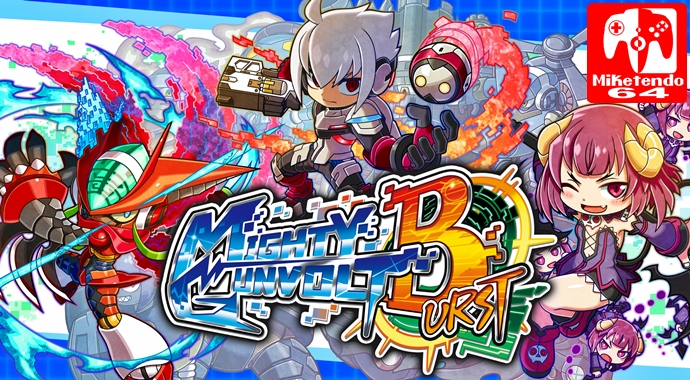 I hope you’ve not got any plans for tomorrow, as of the 28th of December, both a new update and DLC for Mighty Gunvolt Burst, will be available and while the 3 new characters will need to purchases if you hope to play as them each one does come with their own unique abilities and skills. Also, thanks to Inti Creates, we have a new trailer that shows off these villains and lots of other good details to share as well!

As for the new information, we have a slideshow gallery, packed with photos pertaining to each character, a piece of text dedicated to their bio, with another one for each of their story and the patch notes for the Version 1.3 update, so here it all is:

Bio: Copen is a young man who believes that Adepts are a threat to society, and carries out the wishes of his father to eradicate all Adepts from this world. Just like he could in his own game, Copen can copy the abilities of defeated bosses (Mighty Numbers) and use them as his own. In addition to his main weapon, Copen’s support bot Lola manages his arsenal of EX Weapons, which are customizable and can be used together with his main weapon.

Story: One day, Copen went to visit his bedridden little sister, Mytyl. She was sound asleep with a portable gaming device clutched in her hands. She was playing a new action game that featured an Adept as the main protagonist, much to Copen’s dismay. Considering he is known as the Adept Slayer, Copen was greatly displeased with the game, and immediately returned to his lab to create a game that he thought would be more appropriate for Mytyl.

Bio: She’s a female-type robot whose origins are shrouded in mystery. While collecting information on Dr. White, she found herself hacking into the virtual world he created. Although RAY is hampered by her “Xel Decay” condition, which constantly drains her health, she is an extremely powerful robot who can make short work of her enemies.

Story: While the United States was in the midst of a nationwide incident with robots on the rampage, one robot, capable of independent thought, forged her own path of destruction. She is RAY, “The Crimson Destroyer.” Retaining only fragments of her memory, she is in relentless pursuit of a certain individual by means of hacking her way through the nation’s networks. She heard a “voice” echo through the sea of cyberspace, and before she knew it, was standing at the precipice of the virtual world created by Dr. White. RAY takes the first step on a new path of destruction…

Bio: Kurona is a neophyte demon who was sent to the human world to cause trouble and pull pranks. She has faster movement speed when compared to other characters…maybe because she is always running away from persistent demon hunters. Like Ekoro, her standard attack power is a bit low, but when she releases her inner demonic powers, she sees a rapid increase in her damage capabilities.

Story: Kurona had snuck into the P.E. storage room at a certain academy, and discovered a portable gaming device that looked like it had been left behind there. When she realized that the game cart in the system had never been played before, she decided to give it a whirl. “Kyehehe! This is pristine as HELL! I’m gonna beat it before its owner can!” As a demon, pulling pranks is what Kurona is all about, and she was determined make this prank count.

Lastly, because the game has reached 80,000 downloads, a new celebratory wallpaper has been made available, which you can see beneath this text, but can download for yourself, by visiting the Mighty Gunvolt Burst Wallpaper website by clicking here.