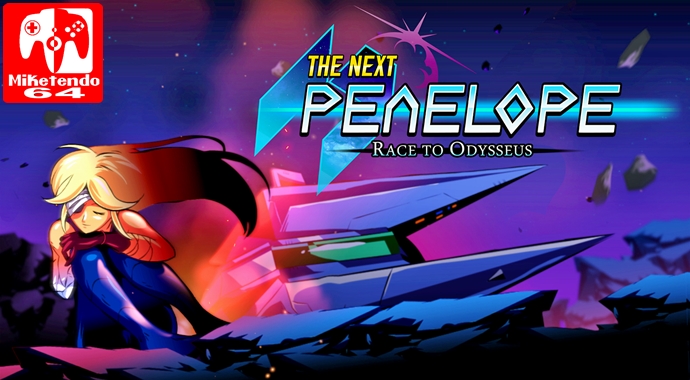 [Review] The Next Penelope (Nintendo Switch)

The Next Penelope is a fast-paced racing game with a story based on Greek mythology, fantastic graphics and music, and plenty of weapons to take down enemies with. Considering that the Mario Kart series is one of the only racing franchises that we’ve played, the top-down angle of The Next Penelope was definitely interesting and challenging!

This game has simple, yet complex graphics with vibrate colors and upbeat music that makes you want to go fast and explore more of the world and stages it has to offer.

Being a top-down racing game, The Next Penelope is a fast-paced, all-risk, high-reward game. Penelope automatically accelerates through the courses, so all you have to do is steer her right while occasionally shooting down enemies, obstacles, and would-be suitors out of your way.

However, it’s not as easy as it seems. Penelope accelerates herself, which is nice that you don’t have to hold down a button through all five laps of the race. With no acceleration comes no brakes, though. If you hit a wall just right, you’ll get turned around and it’s not easy to get back on course. You can steer with the joystick or by tapping the ZL and ZR buttons to go left and right respectfully. Penelope’s ship is sensitive in the steering department so I prefer to use the ZL and ZR buttons, but by worrying about those buttons, it’s hard to think about the various other buttons for your weapons.

Steering, I believe, would be much easier to handle had there been a button for brakes to slow down around corners. The weapons each have their own corresponding button to them once you unlock them and, after you master them, they are pretty entertaining to use while destroying opponents. There’s a blaster, bombs, and a harpoon, to name a few.

The weapons are fun, yes, but for me, there are too many buttons. I couldn’t focus on steering and try to use my weapons at the same time. Steering was hard enough and there were so many twists and turns for each stage that the boosting mechanic didn’t help much. In theory it was great, but my fingers couldn’t handle it all which made the game frustrating for me.

The graphics were bright, colorful, and engaging throughout every race. Each planet that the races were set upon had their own looks and the streamlined graphics of the ships and weapons kept me interested.

The graphics complemented the risky storyline well. In a world based in the galaxy, you would think it’d be dark and mysterious, but the colors made it feel more intriguing in a way. The various styles of each planet were well-designed making each race track a learning curve.

With each planet comes a new weapon and the designs of the worlds worked well with the player learning how to use the new weapon. The music and sound effects were phenomenal, keeping the level tense and suspenseful as well as making sure you were pumped up for the race. The boss themes were some of my favorites!

I did enjoy that when you teleported or something similar, everything went into slow motion for a moment. It was a nice effect and gave you some time to think as well as intensify everything. The bosses were certainly well designed and unique. It was a cool ending to each stage.

Penelope is searching for Odysseus which allows free reign to explore various planets in any order. With each planet, she gains new weapons and has to race against four opponents, usually suitors, and a boss in order to move on.

Odysseus is Penelope’s husband, and she apparently has lost track of him. King Odysseus has been away for a decade in space and his kingdom has fallen under attack by Poseidon. Penelope, in wake of these attacks, hops into her spaceship in order to find her husband. The game’s storyline is Greek mythology’s Iliad, but in space and with blasters.

It’s a cool twist on the mythology and reminds me of a mix of Star Fox and F-Zero.

The Next Penelope was extremely challenging with the unique races, weapons, and levels to master. Once you’ve beaten the objective of the planet’s races, there are a few bonus areas that you can also try your hand at, earning more experience points and gauging your skills against other challenges. If you have a love of the fast-paced challenges with a high risk and reward system, then The Next Penelope would feel at home in your Switch library.

The Next Penelope is unlike a game we’ve ever played. It was face-paced, upbeat, and easy on the eyes. While it was tough and I often felt as though they threw you to the wolves, it was a fun challenge. This game has everything you could want in a racing game with a little extra on the side. It’s a fairly short game, but don’t expect to beat each stage on the first try.