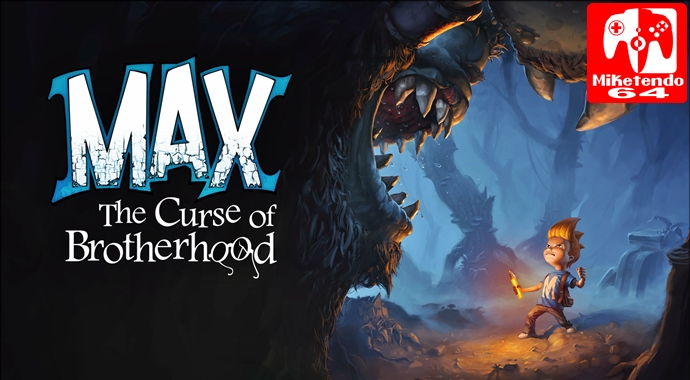 Saving siblings everywhere, one little brother at a time.

One hot Summer, there was once a boy called Max and Max was not the nicest brother going. Upon coming home one uneventful day, to find his kid brother Felix, in his room and playing with his toys, Max pulls out his computer, goes online and searches for ways to get rid of his younger brother. Well, I guess Giggle searches are a lot more efficient than Google searches are because not only does his search turn up the answer he seeks in the form of a spell, but the spell works and a portal opens up. Within seconds Felix is taken and Max only just has enough time to dive in before the portal closes and the events of Max: The Curse of Brotherhood, can commence.

Will the big brother be able to redeem his wrong and save his brother? This is exactly the kind of question and action we can expect from the recently released platformer on Nintendo Switch, but in case you’re wondering why the game feels so familiar, it has been around for quite some time! Having first released on the 20th of December in 2013, Max: The Curse of Brotherhood is a Unity made platformer, with Pixar animation level graphics that was met with some rather mixed reviews when the game came out and as for its protagonist, he’s even older.

The pen isn’t just a minor gimmick, but a crucial one as it is Max’s sole weapon in a foreign land and thanks to the powers it can go on to be upgraded with, Max can literally manipulate the earth by causing trees and other natural objects and landmass to grow branches, pillars and vines that can be used to build new paths, soar to new heights, swing across vast distances, or even be used as a shield. (Vines and branches can be grown, cut and draped over bugs, to prevent them from being able to come after you, kill you upon singular contact and cause you to respawn at the previous checkpoint)

The upgrades for the marker pen can be found across the game’s several chapters and seem to be introduced, at the same time the many puzzles Max: The Curse of Brotherhood, comes packed with, go a little stale. (Although there is some variety to all the puzzles and chase scenes, where Max must escape a giant beastie, even when there is some minor differences between them, it does often feel like a case of “if you’ve seen  them once, you’ve seen them all.) The only downside to the powers Max’s marker pen can go on to learn, is how limited they are. Although they do give Max the power to create and build on the themed worlds Max: The Curse of Brotherhood, has to offer, Max can not actually use his pen everywhere he desires, as it will only interact with colourful spots dotted all over the map, so if you hoped to be able to build a gigantic tower of dirt, just to soar to the heavens and collect a part of an amulet, or remove one of Mustacho’s eyes that he has planted all over Anotherland, you can’t. Instead, you’ll have to take a good look round your surroundings, figure out what to do with that which is presented to you and execute it to the best of your ability. Should you fail to discover every collectible item the many levels have to offer, you can always replay them, once you have completed them.

Now, as alluded to earlier on, with Max only wielding a marker pen, this does of course mean that any and all enemy that Max encounters on his journey to reach Felix and stop Mustacho’s from absorbing his soul, can only be killed or dealt with, whilst getting creative. Some you must trap inside a cage, or under a view, whereas others you need to put them down for good, so as to make sure they can’t kill you because, being a young boy that he is, in a mysterious land, Max is still mortal and everything can kill him just by touching him once. Fortunately, Max is still capable of running and jumping and not being crippled by paralysing fear and the controls for those actions do not feel as unresponsive as they once was, as each moment does feel more smoother now that that Max: The Curse of Brotherhood is on a platform truly deserving of its platformer genre.

To put it bluntly, Max: The Curse of Brotherhood, on Switch is pretty much the same game we saw back in 2013, which means it is still the charming platformer that gamers fell in love with, just on a different platform, with touch-screen controls implemented, for those who wish to play it on the go and use their fingers to solve the many puzzles. So if you’re looking for another decent platformer to invest some time into, after bidding farewell to Super Mario Odyssey, then Max: The Curse of Brotherhood, is as good a choice as any!