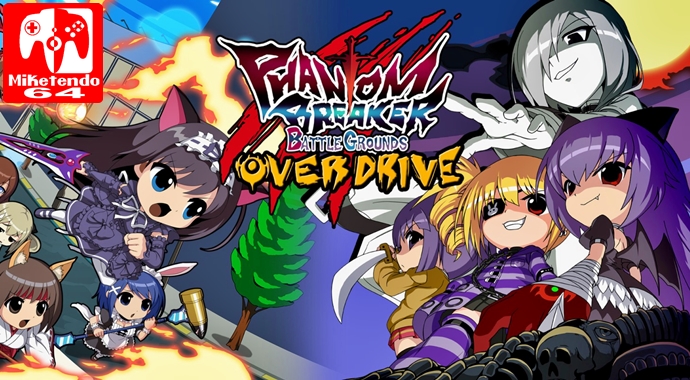 The race to save Nagi begins!

There really isn’t that much difference between the original Battle Grounds game and the Switch version, but the arcade game that sees chibi girls in an anime world, does look and feel better thanks to improved visuals, new skills and new equipment. Oh, and there’s the fact that co-op is supported and lets you play with up to three of your friends. So, unless you feel like being selfish and keeping all the fighting action solely to yourself, there is plenty to go around for anyone looking to take part!

Now, despite its traditional ways of being an arcade fighter, where the goal is to go from one side of the screen to the other, taking on every bad guy, girl, troll-like beastie and robot and you see before moving on to the next screen and doing it all over again game until you beat the Stage Boss and finish the level, Phantom Breaker: Battle Grounds Overdrive, is a game all about variety! From playable 6 characters available from the start, to different costumes and alternative colours, there are enemies of all kinds to keep combat interesting, but there’s also some RPG elements at play. While there are coins that can be collected upon dealing damage to others and killing them, there are also red gems that can be collected to help you level up and earn Skill Points so that you personalise your chosen characters prowess in battle. From increasing their Attack, Defence and Speed, to enhancing specific abilities, the heroines of Phantom Breaker: Battle Grounds Overdrive, are merely pawns that you are to do as you please with.

Nevertheless, the variety doesn’t end there. While the overall plot of Phantom Breaker: Battle Grounds Overdrive, remains the same, an ancient clan surviving all that is good and trying to stop the evil entity known as Phantom and find out what he has done with Nagi, aka Waka’s sister, whoever you choose to play as, will have some impact on the story. It doesn’t change the beginning, middle or end, but it changes the dialogue exchanges between who you’re playing with, and the enemies they find themselves doing battle against (mostly the bosses.) Just know that, by completing the game, which can easily be done within 2 hours on the Easy difficulty, can unlock more characters, so in terms of longevity, there is plenty to be done, if you aim to play through Phantom Breaker: Battle Grounds Overdrive, at least once with every character. But if you do only play through it once, because Waka is playable and it is her sister Nagi, who is taken, you best play as her, as it makes the experience more personal this way. Oh and for those of you who rolled their eyes at the mention of Easy mode, since players who love arcade fighting games, really do like it when the game they’re playing, really pushes them to their limits, Phantom Breaker: Battle Grounds Overdrive has 5 difficulties and the hardest one is Nightmare+! It will make you cry, so I hope you’re okay with that!

As for the actual gameplay, as an old school brawler that requires you clearly an entire area of enemy scum before you can move on, the buttons you will want to know are of course Y for a weak attack, X for a medium damage attack, A for the hard hitting stuff and R when it’s time to use your and really let loose with the hurt. As for the other actions you can perform, things like jumping and sprinting are done via the direction buttons, (or left analog stick if you toggle it on when in the game’s option settings.) But you can also do things like throw and back step, but they’re the result of button combos that are simple enough to do, but easy to forget as you resort to simply Y button mashing until no one is left standing.

Still, while a singular playthrough is not that long, as like I said, when playing on the easiest game, you can breeze through it within 2 hours and that’s including dying and continuing, the colourful graphics and chosen art style, do work well with the chiptune soundtrack and Japanese voice over. Yes, a localiszed version might have been better with English voices so we can actually hear what’s being said, but sometimes the best way to listen to something, is in its original language and that’s exactly what Phantom Breaker: Battle Grounds Overdrive, gives us along with English subtitles and that’s just gravy!

If you are in a rush to end things even faster though, don’t forget co-op is supported and that can really speed things up, but if speed is your game, maybe you should skip the main campaign and play the arcade mode instead. Arcade mode is all about beating high scores and clear times, but if you’d rather beat up your friends character instead, as arcade and levelling up to level 99 on each character doesn’t appeal to you, there is a Battle Grounds mode where you can all battle it out and find out once and for all, just who is the true Phantom Breaker: Battle Grounds Overdrive champion! You might not lose your friends if you win, but you will lose their respect if you throw a pissy fit if you’re the first one to die!