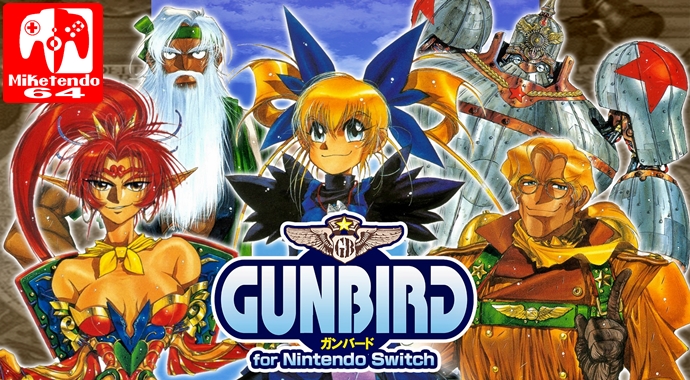 With plenty of arcade games playable on Switch already, including all the Neo Geo titles, the arcade line-up has once again found itself being expanded thanks to Zerodiv, who today, released the third game they have planned for the Nintendo Switch and that game is Gunbird. Originally released back in 1994 for Japanese arcade, Gunbird is a Psikyo developed, arcade vertically scrolling shmup (shoot ‘em up) that originally made its Western debut under the name of Mobile Light Force.

Various releases have occurred over the years, including a very special release for PlayStation 2 in 2004-2005, entitled Gunbird Special Edition. What made it special was the fact it was both Gunbird and Gunbird 2. Now, to some disappointment, the Switch release is not Gunbird Special Edition, as that would have been sweet, but it is the original game in its original entirely, which means unlike the localised Mobile Light Force, all in-game plot is still present and accounted for, but so are all the game’s multiple endings and original character names.

Still, since Gunbird is out now, it’s time to ask the question, “Is it worth getting?” Well, to answer that in a short way would be to simply say, if you liked Strikers 1945 when Zerodiv brought that to the Nintendo Switch back in August, then you will like Gunbird. Both games share similar graphics and exactly the same gameplay. There are attacking enemy ships that will come at you in groups, firing missiles. There are boss battles that can just go on and on and on, thanks to various stages and there’s more than just one character to play as.

Unlike Strikers 1945, which allows you choose between 6 aircraft and pilots, Gunbird has 5 available characters, but they’re actual characters, who each have their distinctive play style. All of them can fly, thanks to a man-powered helicopter and a Witch’s broomstick, but how the can attack is another story as English 13 year old Witch Girl Marion, can use magic and Valnus, he’s just a robotic powerhouse, who can devastate anything when fully powered up! Incidentally, he is a robot, built in Russia that desires to be human. As for the other characters, there’s the Famous Adventure Ash, who is 28, from German and flies around with a jet-pack. There’s the Oriental Fighter Yuan-Nang, a strong-willed woman and skilled fighter who was influenced by Sun Wukong from the classic Chinese story, Journey to the West. As for the final playable character, he is the Stubborn Old Carpenter Tetsu. It is he who flies the man-powered helicopter, he’s 60+ years old and according to his Wikipedia bio, is open about his sexual orientation in an “uncloseted manner.”

Opposing the 5 playable characters, is an organisation called “The Trump.” The Trump is a group of Sky Pirates that consist of Ace, Claude and Rouge and consistently do what they can to hinder you in their efforts of acting as bosses on most of the game’s 6 available stages. Other than just being a reoccurring menace for you to deal with, they also help drive the game’s story, via a few choice lines between battles, with the rest of the game’s story being told between levels. Now, while the story is pretty much the same throughout, you play a character battling The Trump, whilst trying to collect 4 pieces of a Mirror that would lead you to a temple, where a seal can be broken and your wish can be granted, who you choose to play as can have some grave consequences on the game’s ending as each of the 5 characters desire different things and upon beating the game, you can only pick one of their desires, so you will have to play through it again, just to see the other option.

More than just that though, if you are able to play with a friend as co-op play can is supported, with Player 2 being able to pick up and play at any time, should you and them pick the characters Ash and Marion, as you progress through the game, during the scenes between levels, Ash will develop an interest in Marion, albeit a bit of an unhealthy one. Character relationships and typical vertical scrolling shoot ‘em up gameplay aside, although Gunbird was originally released 1 year before Strikers 1945, Gunbird set the stage for what Strikers 1945 could be and now that both games are back and on Switch, with Gunbird releasing afterwards, it is now Gunbird that is the superior game. Zerodiv has made some minor improvements with regards to how the game is presented, such as the pause menu where you can increase the number of lives you have (characters) and change the number of continues you can have (unlimited being the highest.)

The biggest thing though about the Switch release though, which is worth mentioning before heading over to the conclusion of this review is that, while Strikers 1945 and Gunbird are practically the same game with just a few various differences, the biggest one is the fact that Gunbird supports Video Capture. Yes, that’s right! Gunbird has Video Capture, so if you’re a hardcore arcade gamer that is more than happy to play Gunbird on its Very Hard difficulty setting and want to record your epic struggles against deadly bosses, then you absolutely can, so get ready to share the arcade with everyone, because whilst the action starts in your hands, you can soon share the experience on the likes of Twitter and YouTube!

Not for a single second do I think Gunbird will appeal to everyone. Regardless of it being better presented, and a game that can be as hard or as easy as you want it to be, given the quantity and quality of twin-stick shooters Switch has got in recent weeks, it makes it hard to justify purchasing Gunbird when you could be playing Xenoraid instead. But if you want a touch of old school on your Switch that isn’t Neo Geo, than Gunbird is not the worst option as it is Zerodiv’s best Switch offering at this moment in time.