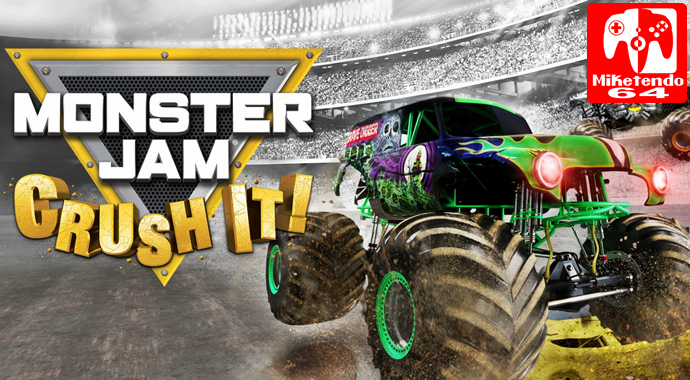 Upon booting up Monster Jam Crush It!, I managed to crash the game to the Home Menu, unintentionally send my car flying 50 feet straight up in the air, and fall through an endless void… within the first five minutes.

Yeah, it’s gonna be one of those games.

Monster Jam Crush It! (no, I didn’t forget a colon, that’s actually how it’s spelled) is a 3D racing/stunt game that amazingly manages to offer no real racing, very few stunts, and a whole lot of boredom across four lifeless modes. In Stadium Races mode, you compete against a CPU opponent in a race to see how fast you can press the power button on your Switch before you want to kill yourself. Though you both drive in the same stadium arena, you don’t actually drive the same track path, which leads to plenty of occasions where you lose to an opponent you never even saw. And lose you shall, since the trucks in Monster Jam Crush It! handle like their tires are slathered with butter. Even the slightest incline will send your vehicle careening out of control, so you’ll need to be extremely careful and stick to flat ground whenever possible to even have a chance of winning.

Stadium Freestyle is the second option on offer, and it’s essentially a sandbox mode where you drive around an arena and perform tricks by turning the right analog stick in any direction as your truck unnaturally tumbles around like a hyperactive toddler in a playpen. Unlike Stadium Races there’s no need to follow a predetermined path, so the godawful control is actually a plus here since you want to get big air off ramps. Unfortunately, since simply holding both analog sticks down will cause you to do an infinite backflip that awards endless points, there’s no challenge or excitement to this mode anyway. The audio, however, is another story entirely. Remember that voice in Sonic Colors that would say “Good, Great, Awesome, Outstanding, Amazing!” when you did tricks? Now imagine that guy is about 40 years older and standing way too close to the microphone, and you have the announcer in Monster Jam Crush It!. Even the most basic of stunts will be met with a hilariously muffled scream of “SHOCKING!” or “MARVELOUS!”.

Surprisingly, 3D driving isn’t all the game has to offer, as Hill Climb mode can be best described as a bad rip-off of the Trials series with absolutely no stakes whatsoever. See, in Trials, you’re a frail guy on a bike, so even one ill-advised flip can quickly send you to your doom. In Monster Jam Crush It!, however, your bizarrely bouncy monster truck is nigh invincible and can only be thwarted by the horrendous physics that defy all logic by managing to turn your car around 180º horizontally despite supposedly being locked to a 2D plane, at which point the game will arbitrarily declare that you’ve been “WASTED” as though you’re playing Grand Theft Auto. The game is indeed about automobiles and anyone who paid $40 for this mess certainly got robbed, but I don’t think there’s anything “grand” about it. Honestly, the only fun I got out of this mode was seeing how many levels I could complete by doing nothing but keeping my finger pressed on the accelerator, and even that stopped being entertaining once I realized the answer was “nearly all of them”.

Lastly, we have Crash Mode, and I don’t even know what they were going for here. Ostensibly the goal is to find some busted up old cars and run them over for points, but you spend most of your time once again fighting the slippery handling and trying to figure out where the heck you’re supposed to go. Invisible death walls litter the empty desert that hosts these levels, and we all know there’s nothing more fun than getting immediately killed by slamming into something you couldn’t see coming! It was tough to decide which mode was worse, this or Stadium Races, but ultimately I had to give it to Crash Mode since it managed the impossible: making destroying things with a monster truck boring.

The game is mercifully short, with just a handful of events for each mode (aside from Hill Climb, which has well over 4 times the content of any other mode). There’s no multiplayer, so friends and siblings of any poor child who gets saddled with this abomination for Christmas can breathe a sigh of relief. The atrocious graphics look last-last gen (especially in handheld mode) and the audio is comprised of rock tunes so generic that I was astounded to see they were actually composed specifically for the game and not stolen from some royalty-free collection. Overall, my favorite part of the experience was definitely when I deleted the game from my system.

Playing Monster Jam Crush It! is only slightly preferable to being crushed by an actual monster truck.