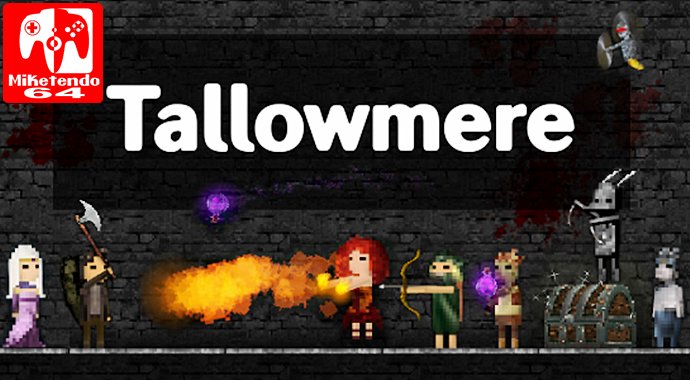 Tallowmere is an action puzzle game where the rogue-like player explores a dungeon room by room for monsters to defeat for their souls, coins, weapons, and gear. The challenge is to clear as many rooms as possible before dying.

Each new room is randomized every time you play. The further you get, the rarer the items and the harder the enemies. It’s an addictive challenge, to say the least.

The gameplay is simple enough. The premise is to not die while clearing as many rooms as possible, and the controls were easy to get the hang of. We played using the Joy-Con Grip, and it was simple to remember which buttons are used to shield, jump, and attack (for the most part — there were times when I kept attacking rather than jumping), and to interact with people, chests, and items. The up and down directions of the control pad were an easy switch between weapons and potions, allowing us to change our weapons on the fly.

It’s all straightforward. You attack enemies, you open chests and new weapons and armor, and my favorite part was that you could infinitely jump. You can spam the B button and hop, hop, hop in midair, kind of like Kirby, but without losing your breath. The main idea is to kill the enemies and collect their souls. Once you have a certain amount of souls, you can increase your HP, attack power, and defense by finding a certain statue who trades that power for the souls.

Yes, the Demon Statue was very helpful and, if you couldn’t find one in the room you were currently in, each room has a warp-point that brings you back to the beginning. There, you can find a Demon Statue along with a merchant for basic items, Lady Tallowmere if you need a heal, and… Well, we never did this, but there is the option to sacrifice a kitten in exchange for upping your health and lowering the difficulty a touch. We were horrified at learning the option, even if they are just pixels on a screen!

Yeah, no. No sacrificing kittens for me even if it is just a game! Speaking of, though, there also was The Punisher who resembled the Grim Reaper. If you talked to him, he upped the difficulty. We never did that either because… well, the first few times we played, we were awful at the game. That may be a challenge for another day.

Progressing through the dungeon was challenging enough, with more and stronger enemies appearing with each new room we entered. Aside from enemies, there were also traps, such as spikes, poison gas, and saw blades to avoid. The only criticism that we have for the random rooms was that sometimes a trap would be unavoidable, such as a saw blade or patch of spikes being placed directly in front of the door to the next room. With that said, though, many of the traps also worked against the monsters. There is always at least one enemy in the room that has the key to the next room and, sometimes, they’ll stab themselves with the spikes and you’ll get the key without having to raise your weapon.

While some of the traps were unavoidable, that was usually pretty far into the dungeon. It didn’t take off much health at that point either because you had good armor. It was satisfying to watch the traps kill the enemies for you. Once in a while, you’ll come across an “event room.” You still have to work to get the key and make it to the next room, but these event rooms had an extra challenge. One where there was a hydra you had to defeat before moving on. Another was as simple as getting a flag and bringing it back to home base via the blue warp to give to Tallowmere. It added more to the dungeons and even though it was random, it was satisfying to get an event room because I felt as though I was getting deep into the game.

The game is a 2D platformer and the graphics reminded me of Death Road to Canada — a little pixel-y and simple but charming for the game itself.

The graphics were enough. The main idea of the game is to look at each room. The enemies and your character don’t have to be too fancy at all. The dungeons were well crafted, getting bigger and more complex the further you get along. There was blood splatter whenever you killed an enemy or hurt yourself, but we found a way to turn that off, which was nice. Not that it was gory or anything, but it’s kind of gross… I’m not into that kind of details.

It was honestly another nod to Death Road to Canada. The music was fun and kept you focused when navigating from room to room, and the sound effects were spot on. Whether it was us using a rocket launcher, a fire mage shooting cackling flames at us, or poison gas being emitted from traps in the walls, the sound effects kept us immersed.

The sound effects were certainly great. I enjoyed the jumping sound as well as chopping people with my axe. Each enemy had their own noises as well. Not just their powers and weapons, but also their voice. They don’t speak, but they make noises as they die.

So, basically, their dying wails. Nevertheless, the graphics and music were paired very well together, keeping us invested in the game as we delved deeper and deeper into the dungeon that was crafted for us.

There isn’t too much of a story for this game. You play as the protagonist going through a series of dungeons created by Lady Tallowmere. Why are you doing this? That’s not clear. Honestly, we’re not even sure if Lady Tallowmere is on your side or not, despite her healing you if need be.

Lady Tallowmere is the mastermind behind the dungeon, and she seems to be testing you for, perhaps, her amusement. It got to the point where we were curious if we were being the bad guy — perhaps the monsters weren’t truly monsters and they are hapless victims of Lady Tallowmere’s “game.” There were even rooms where you would speak to an astral projection of Lady Tallowmere, where she would either give you hints, a warning or even summon more monsters to see how you fare.

The replay value of this game is high considering that every room is randomly generated each time you play. It’s addicting to see if you can beat your highest score of rooms cleared, to see how much loot you can collect, to unlock every weapon, shield, and gear. The game automatically saves every time you enter a new room, and the rooms aren’t too big that they take longer to get through, so it’s easy to pick up and play for a little while if you have time to kill. Tallowmere is a game that we will definitely play again!

Overall, Tallowmere is a charming game that’s easily addictive. It can bring out your competitive side with friends to see who can last the longest and get the highest score. It’s a fun challenge that can get intense fast but can be pretty casual at the same time. It’s a game we’ll be going back to again.