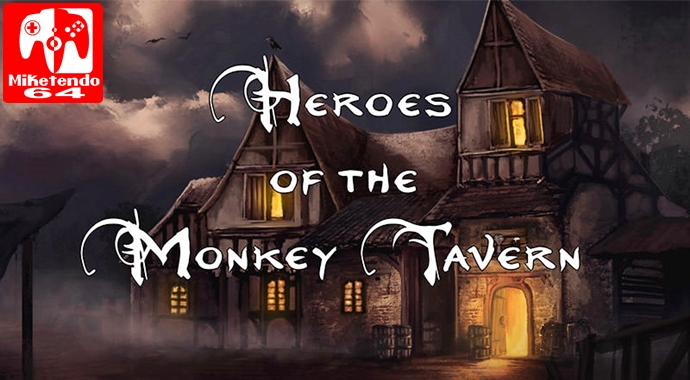 If you’re an internet savvy Switch gamer, you’ve probably heard a thing or two about the recent controversy regarding Nintendo Switch game icons. The guidelines are very clear: have some decent art, and have your game’s logo. It’s so easy to follow, a drunken monkey could do it – yet somehow we continually see otherwise competent developers balk at the rules and give us substandard icons with no logo, as seen with games like Sonic Mania, JYDGE, and Snake Pass. While there’s really no excuse for this, I consider myself a reasonable guy. Normally I would never dedicate two whole paragraphs to complaining about something as insignificant as a Home Menu icon. But THIS:

…this is taking it too far. This is the lowest of low efforts. This is actually offensive to the eye. I can’t even begin to fathom how anyone could seriously think slapping a poorly drawn monkey on a plain white background and calling it a day is an appropriate approach to graphic design. Did you want attention, Monkey Stories? Well, you got it! This creature is a blight on my Switch menu. It’s so bad, I actually deleted the game after finishing this review. That’s no statement on the game’s quality, I just hate this abomination of an icon so much that I never want to see it littering my system ever again. But I digress…

Despite what the silly name, comically bad icon, and vaguely amusing intro sequence might suggest, Heroes of the Monkey Tavern is a first-person dungeon crawler in the vein of Dungeon Master and Eye of the Beholder that plays it totally straight. Much like recent isometric platformer Lumo however, it takes the old-school gameplay of its predecessors and updates it for a modern era with true 3D graphics, an auto-mapping feature, and simplified controls. Of course, when it comes to dungeon crawlers, even simplified controls are more complex than they have any right to be.

The game gives you no tutorial on how to play, so checking out the instructions is a must. Essentially, you move with the D-Pad, turn with the L and R buttons, switch heroes with ZL and ZR, attack with B and A (are you paying attention? This will be in the test), open the menu with X, interact with objects with Y, drink potions with the left stick, and look around with the right stick. It’s very strange and overwhelming at first, especially for console players unfamiliar with the hardcore nature of a typically PC-only genre such as this, but everything becomes second nature pretty quickly. What really threw me off initially was the real-time nature of the combat. Though movement is grid-based, enemies can walk freely about the dungeon even if you’re standing still, and combat involves switching between your characters to attack with one while the others are finishing their cooldown. You’ll also take damage if you move even one tile away during a fight, so once you’re in a battle it’s hard to back out.

Combine all that with the initial setup you have to undertake before setting out on your adventure (choosing 4 classes, assigning their skill points, choosing their portraits) and you’ve got a game that asks a lot of the player before they even get to the meat of the game. Luckily, hardy adventurers who brave the obtuse menus and controls will be rewarded with a competent and challenging sword and sorcery RPG. Most of your time in Heroes of the Monkey Tavern is spent creeping through a dingy dungeon, fighting fearsome foes like spiders and snakes while checking walls for secret passages and hidden loot. Finding progressively better gear to outfit your heroes with and slowly molding your 4 characters to each fill a particular niche is as fun as it’s ever been, and I’ll admit that the game even provided a few scares when I’d walk down a dead end only to be greeted by a knight ready to bury an axe in my neck as I turned around. Sadly there are only 8 floors, and while they provide a good few hours of fun there’s not a whole lot of reason to go back unless you really want to try some different classes on a harder difficulty. Still, it’s hard to complain when the game is only $10.

Though the dungeon visuals are a bit cheap and samey, they provide a great atmosphere that really evokes the feeling of exploring an ominous underground crypt, as does the creepy music. Unfortunately the same can’t be said for the UI, which makes no effort whatsoever to fit the rest of the game and looks like the devs threw it in at the last moment. Even the totally disparate character portraits appear to be generic fantasy art taken from other sources. Heroes of the Monkey Tavern certainly won’t be winning any awards for presentation, but if it’s quality dungeon crawling gameplay you seek, look no further.

…No, you know what? I won’t digress. This transgression cannot be allowed to let stand. Change that icon Monkey Stories! CHANGE IT!