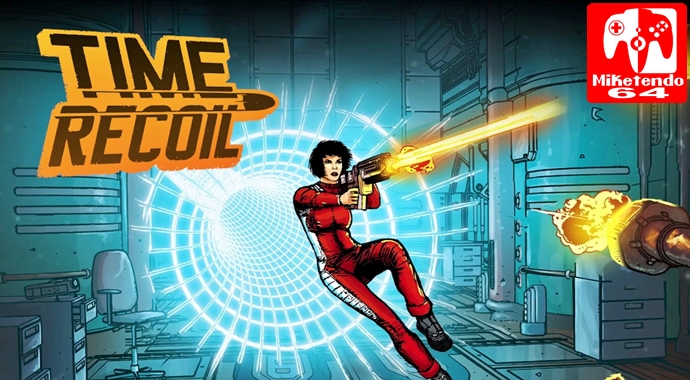 In recent months, 10tons have showed the Switch gaming community that they are the kings of the twin-stick genre and Time Recoil is yet another game that further adds to their reputation.

Time Recoil has some key features that make it stand out from the rest as they have introduced freeze time and special moves. In Time recoil you are assigned to eliminate Mr. Time an evil time lord who wants to find and destroy you and other rebels. As the protagonist you aren’t going to let this happen and you discover you have the ability to freeze time through killing enemies and by the way, this time freezing mechanic is super useful in many different scenarios and you will be grateful that you have it.

All the controls work like a charm like all 10tons twin-stick shooters. With some twin-stick shooters you have awkward controls, which don’t take advantage of the controller’s buttons, this is why I like that the shooting is allotted to ZR. This makes it enjoyable to control and a very smooth experience all in all. As for framerate drops, the only time I ever experienced any slow-downs, was actually when they were intentional as part of some slow-motion scenes. It’s also a top-down game, which is a personal favourite playstyle of mine, as it allows you to view a large area. This is very useful in Time Recoil as it lets you scout out loot and enemies within the vicinity.

When you put the slow-down and top-down view together it makes the game feel great, with all these features it plays like Mr. Shifty which came out earlier this year for the Switch. However, there are a lot of unique elements that you will not find in any other similar games out right now on Switch and that is the puzzles it includes, the puzzle sections are refreshing for this genre and keep it unique. For a twin-stick shooter, there’s lots of dialogue between characters which personally I didn’t think add anything to the game. The dialogue was good but I felt like it was unneeded and I just wanted to skip it all, just so that I could actually get back to playing the core game.

You will also have to find many documents and classified files to unearth the evil plot of Mr. Time. The weapons sound great and all the other sound effects do too, however, the music was not memorable as it’s very repetitive and all sounds quite similar. The graphics are suitable for the game and pop with bright colours. There is a lot of tones used to contrast the different environments to reflect the mission you are taking on, this detail is probably not that noticeable but I liked the inclusion of the different colours from level to level.

The aesthetic is good but some of the enemies blend in with the walls and other surrounding objects. This is only if you are not looking ahead as you’ll suddenly be face to face with a barrage of bullets if you aren’t careful. The story is based around Alexa, the female protagonist you control, breaking out of prison. She has broken out of prison to join a research firm who deploys her on select top secret missions. These missions pan over 50 levels each having unique challenges. However they don’t just send Alexa on missions they send her on missions back in time meaning it’s a race against the clock.

As for the gameplay, it is very fun and you will have a blast navigating down the corridors and offices. There are 2 game modes the normal campaign and the time attack mode. For the latter of the two modes, you will have to perform near-perfect runs to reach the time limit. This is definitely for the more experienced player as it poses a big challenge. The 2 game modes are nice as it adds more fun for the hardcore twin-stick shooter. A co-op game mode would have been appreciated as I think that would make it appeal to more people. In terms of replay value there’s not much here unless you want to go through the same missions again. I felt like I was satisfied with how much content you get for the price, talking about the price I think it’s just right and well worth a purchase.

Overall I think Time Recoil is a fun new twist on the twin-stick genre as it adds dialogue and other key elements. However I would only buy it if you are fully into the genre, I say this because it can get repetitive at times. The gameplay is great, the controls will impress as they are very tight and Time Recoil is just a blast from start to finish that will keep you captivated for more hours than you can imagine.