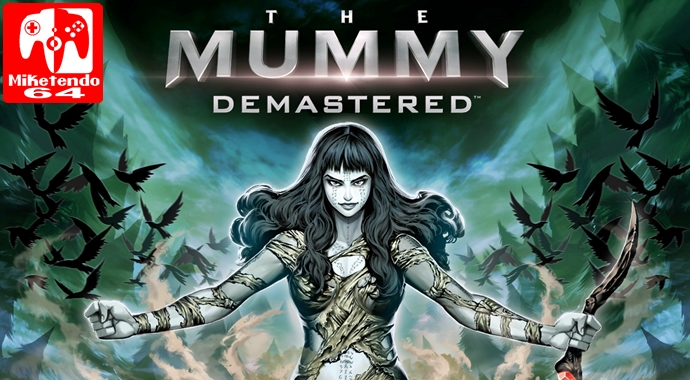 Movie turned video games don’t normally end up being that great. A prime example is Superman 64, which was set out to be an amazing game with stunning graphics and physics. However, it is now rated as one of the worst video games to ever hit the shelves. Still, it looks like the trend is set to change as WayForward has done a great job with their newest release.

Wayforward has done as much as it can with the limited story from the movie which reached the cinemas a few months ago. You have to defend mankind against the evil Princess Ahmanet as she uses all her powers to try and eliminate you. She uses her powers to take control of the undead soldiers and the diesel ridden rats and bats. You are an elite specialised monster agent but the rest of his comrades have fallen victim to the princess, therefore becoming zombies. When you die you actually see a little cut-scene of you falling to your knees and then turning into a zombie. This was a neat idea and I liked how instead of a regular game over screen they implemented this haunting cut-scene. As you progress through the game you have someone communicating with you and directing you to where your next objective is. This serves as guidance to make sure you know where you’re going if you go off course.

The chiptune tracks complement the eerie streets of London or the abandoned woodland perfectly. The retro music fits with the atmosphere and the sound effects make it that much better. No matter if you’re blasting bees or dodge rolling through crevices the sound effects match what you’re doing. All the weapons have great effects and sound as realistic as a sci-fi weapons can do.

The retro-inspired visuals look stunning especially as it’s a Metroidvania style of game. The game runs at a solid 1080p 60fps with very few frame drops (for me anyway as others have reported many,) so the shooting feels fluid and accurate. The environment looks haunted and creepy and achieves this successfully by implementing lots of features and rocks to traverse. All the animations and designs are superb and capture lots of detail for 16-Bit. The game looks great in handheld mode to so you’ll be no doubt killing zombies on the go.

As it’s a game heavily centred on exploration you would expect the gameplay to be fun, and it truly is. The shooting mechanics work perfectly and help you obliterate enemies. You can find new weapons and abilities, which is where the exploration bit comes in as you’ll be going back and forth a lot.

Being a platformer there are lots of precise jumps you will have to execute, the game features a mini-map to locate save points and to see your next objective. This map comes in handy as when you’re running low on health you’ll want to know where the closest save station is so you don’t lose your precious progress. You will die a fair amount as it is quite difficult but as you find new weapons and abilities it will become easier. Not to mention you upgrade your health throughout the game so you’ll be able to withstand much more damage. This health will be a saviour when it comes to the well-designed bosses, the bosses are awesome and will be a highlight of your play because of their unique designs.

At some points in the game, I felt like there were too many enemies and found myself getting swarmed with rats with nowhere to go. The game also offers 50 hidden relics for you to find so if you like completing a game with lots of achievements this is the one for you. I did however, encounter one issue with the game it crashed randomly without notice, It wasn’t too bad however as I started right back at the checkpoint and didn’t lose too much progress. This minor glitch only occurred once and I have been assured that a patch will come to fix any bugs. I definitely liked the inclusion of the mini- map as I stated before as it helps you navigate and gauge how far you need to travel to places. Some of the weapons include flamethrowers, grenades and automatic rifles which can all be used effectively in different scenarios. Overall the gameplay is really fun from start to finish but gets intense when you begin gaining cool power-ups and weapons to use.

At $19.99 USD I think the game is priced well. For a great single player experience, I would highly recommend the title to anyone in need of some great action-packed adventure gameplay with thrills and spills. The eShop does have some amazing titles in this genre already but The Mummy Demastered feels like there’s been so much care and effort has been into the game.

WayForward has done an absolutely amazing job with this movie tie-in and is a perfect call back to the old Metroid and Castlevania games it takes after. With fun gameplay that includes shooting up evil animals and the relentless undead, hands down, you will feel like a powerful hero and if it’s not to your liking, there’s always Shantae: Half-Genie Hero!