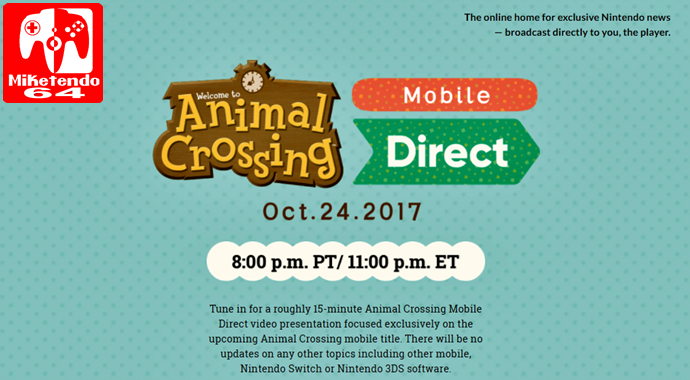 Ever hear of “Good news, Bad news?” Well that’s exactly what we have for you today/.

Nintendo has revealed that on the 25th of October (aka this Wednesday in Europe and Japan,) a special Nintendo Direct will take place which is solely focused on Animal Direct. Only the direct, which is said to only be around 15 minutes long, will only focus on the mobile game we have heard nothing about, so if you were hoping there might be some Switch and or 3DS news, there won’t be.

I know that’s a bit of a sting as many of you have been waiting for years for a new game you can sync your teeth into, but maybe, just maybe, the forthcoming mobile title could be just what you need to pass the time until a Switch/3DS game is both revealed and released.

For anyone wishing to watch it, below a couple of links, in which you can use, as well as a list of dates and times:

*European and Japanese Direct will actually take place 3 hours later than the North American ones so as to allow those in the regions mentioned, to actually be able to watch it.

But in the event you are unable to watch it, we’ll be sure to keep you all well informed, via some well needed Animal Crossing Direct coverage!