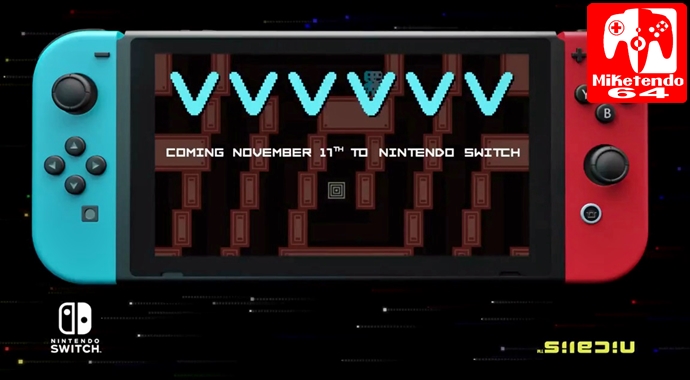 So, know how Nicalis really likes to support the Nintendo Switch and surprise games on us? Well they’re doing it again and this time the game in question is VVVVVV:

Stylish Action Game Will Upend the Nintendo eShop on November 17

SANTA ANA, Calif., October 23, 2017 — Nicalis, Inc., video game developer and publisher, announces today that the crazy fun gravity-switching saga VVVVVV will release on the Nintendo eShop for digital download on November 17. It will carry a price of $9.99.

In VVVVVV you play as Captain Viridian, brave commander of a spaceship whose crew members are accidentally teleported to random locations in an unknown dimension. While exploring the ship and its surroundings, you can switch the polarity of gravity at any time. You can “fall up” to extricate yourself from pits and walk across the ceiling when it’s too dangerous to step on the floor. Viridian uses this ability to search for teleporters, shiny collectible trinkets and the ship’s missing crew.

“VVVVVV was designed by Terry Cavanagh as an homage to the 8-bit Commodore 64 computer games that he played while he was growing up,” says Nicalis president Tyrone Rodriguez. “But you don’t need to have had those experiences to enjoy every last bit of it. It’s one of those rare games that are immediately accessible and simple.”

The Switch version of VVVVVV runs at 60 frames per second, with bright and colorful throwback graphics and a number of graphical filters to change the visual aesthetic. The supremely catchy chiptune soundtrack will stay in your head for hours after you stop playing. Developed by distractionware and Nicalis, Inc., VVVVVV will be available for Nintendo Switch on November 17 as a digital download from the Nintendo eShop for $9.99 (North America) or €9,99 (Europe). The game has been rated E by the ESRB.