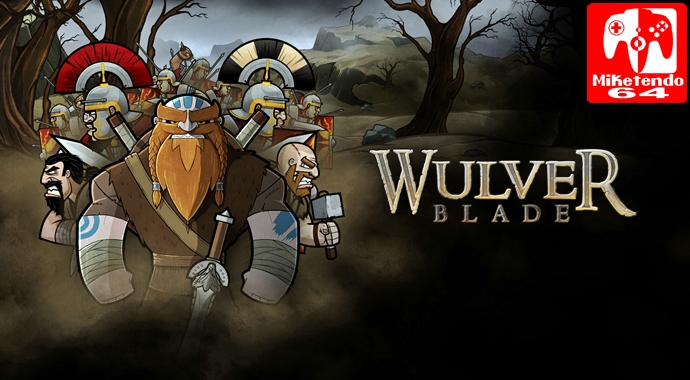 *CAUTION! Images of a violent nature and cartoon gore lie ahead. May not be suitable for young children.
If you ever wondered what you would get if you took a side-scrolling beat-em-up, mixed with Braveheart and threw in some bloodthirsty wolves along with some bloody cartoon violence that might make even the great Quentin Tarantino flinch, you will most definitely end up with Wulverblade.

Wulverblade was developed by Darkwind Media with the help of Creative Director, Michael Heald of Fully Illustrated. Darkwind Media are a Game development company and consulting agency that dedicate their efforts in porting games to other systems, creating new IP’s and helping other developers bring their game to life. Fully Illustrated is a creative agency that helps flesh out ideas and gives them body. These two companies came together to help bring the colourful and engaging Wulverblade into being.

The game itself takes place in Britannia in 120 AD. The Romans have invaded and conquered most of the country barring the north and the 9th Legion of 5,000 strong and fearsome soldiers aim to conquer the rest of the land. However, the tribesman of the north have rallied together, led by their guardian Caradoc who bears a special gift that he has yet to fully realize and instead of waiting for the Romans to come to the North, they will take the fight to them in the South. Based on real locations and lore. Wulverblade sheds light on the gruesome truth of Britannia’s bloodied past at the events that probably forged Britain’s inspiration in creating an empire bigger than that of the Roman empire. This game doesn’t just have a great story, it goes the next step with using great history that shows you should never mess with a Scot, especially when it concerns his freedom.

From the get-go, you have a choice four options. Campaign which is the story mode,  Arena, Options and Extra. In Campaign, you can play through the main game with a choice of normal or arcade mode. Normal allows you to continue from a save point if you lose all of your lives and Arcade is for the true Arcade players, giving you three lives and three continues to try and make it through each of the 8 progressively challenging levels. The third mode is unlockable after completing the game requiring you to unlock your inner beast. After selecting either mode, you will then have a choice of playing as one of three characters including Caradoc, the main protagonist. Each character has their own strengths and weaknesses be it better defence, attack or speed. The campaign can be played alone or enjoyed with a friend and will most definitely be taking up most of your free time as you tear through your enemies, hacking off limbs and heads and throwing them at others.

Weapons can also be picked up and used on enemies as well but they do have limited use. You also have two special skills that you can take advantage of when things get tough. when your rage meter is full, you can enter rage mode which will allow you to inflict pain on your enemies even faster without being hurt yourself. You can also summon Wolves with the Wolf call once per stage to help even the odds when overwhelmed with enemies and with little room to manoeuvre.

The Arena mode allows you to take on hordes of enemies in a single arena in the hope to rack up a big enough score to make your friends jealous as you overtake them on the online leaderboards. You only have three lives so you have to make each one count as every round you play gets significantly harder. There are seven different arenas available, each with their own hazards like fire or bombs to aid or hinder your progress in getting a high score as you massacre every living being in sight.

Options allow you to edit various settings like sound volume, subtitles, rumble and other features and Extras is where you can really appreciate the hard work that has gone into the game. When you find special letters, weapons or view cut-scenes in the game, they will provide you with artwork of the game and detailed information on each of the weapons, lore and history that you find in the game. Michael Heald really went above and beyond to research the history of Roman Britannia and gives us a better insight of the tiny isle nation that could put Wikipedia to shame.

I have just realised that I have yet to talk about its graphical representation but I am sure that you can see in the screenshots that you already know what there is to say. The colourfully drawn animation of this game is beautiful, from the characters to the background. Everything really pops and the animation is fluid. The loading times can be a bit long at times but once you get into the action you realise that it more than compensates, as they say, “Good things come to those who wait.” The soundtrack and sound effects are great and do well to draw you in. The voice acting between characters is entertaining and before long you will be cursing your enemies in a Scottish accent and yelling profanities as you dismember them body part by body part.

Gameplay is relatively simple and with two attack buttons, a weak attack and a strong attack. jump, block and of course, movement. There is not really much more needed. combo chains are put together by mashing the same button repeatedly but there are a few combos that require pressing buttons in a specific order to orchestrate. Still, they are no more than three button sequences so there is not too much to remember. Game control is reasonably well responsive and there is very little lag between button press and action. Though each action requires time to finish before you can do the next so be careful when training parry’s on an enemy when you should be preparing to block an attack. One thing worth noting is that when enemies are about to do a strong attack, an exclamation mark will appear above their head, which will give you half a second to either dodge or block the attack. getting hit by these attacks can be quite costly to you and could end your game sooner then you hoped.

Wulverblade has a lot going for it  and it is hard to find criticisms for it. In fact, I think it is more of a case that I don’t Want to find criticisms as it is a stand-up title that does well to support itself and is a well deserving game to have on any Switch console, or on any system for that matter. The only negatives that I could put together would be that you could have a 3-player multiplayer instead of only two has it would make the game even more enjoyable. It would also mean that when I play the game with my brother or sister, the other could join in too but then again the game is still entertaining to watch just as well as playing.

A well-deserved game to have in your Switch library and an indie title that doesn’t actually feel like an indie title. Full of fun facts and lore with gameplay that will have you coming back for more, even if just to Scream “Freedom!!!” at the screen in a Scottish accent. I am sure this game may go down a treat in the home of the brave. I love the amount of effort and dedication that was put into this game and although he is not an historian, Michael Heald really did do his homework and should be rewarded an A+ for his work.