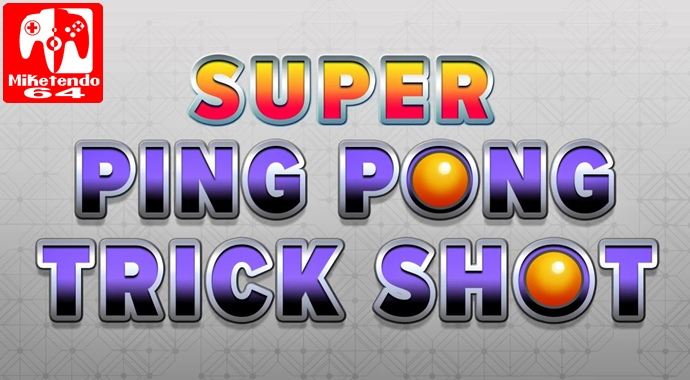 Calling all beer pong players! It is time to put down the beer and pick up the Nintendo Switch, as Super Ping Pong Trick Shot is out now in the West and reviewing it falls down to me!

With the exception of one Pong variation, I have never really been a fan of Pong games, be it physically or even digitally as a video game, but the Switch is great at getting players like myself, to play games that are normally out of our comfort zone. Yet, despite an eagerness to give Super Ping Pong Trick Shot a well-deserved shot, let’s just say the ball did not go in the cup like the devs were hoping it would, as instead it bounced and flopped right off the table.

Super Ping Pong Trick Shot is not a terrible game, but it is so bare bones and lacking on a visual perspective that there doesn’t seem to be all that much there, but credit to the developers, as while the graphics and the soundtrack may fail to appease the players, the many different ways to play it are both a credit to the game and those who are behind it, especially since each one does handle rather pleasantly.

Sadly, while the Pro Controller may not be supported and HD Rumble may not have made an appearance, gyro (motion) controls and touch-screen controls are both present and they’re actually not that bad! With the power of touch, you can tap the screen twice to return the ball back to its starting position, or drag your finger across the screen so as to flick in an effort to throw the ball after deciding on its trajectory and power. But with the power of Gyro, you can take up your single Joy-Con vertically and whilst holding down on the ZR or ZL butting and swinging the Joy-Con, you can throw your ping pong like a pro, as you aim for the awaiting cup, but be warned, how fast you throw will determine the ball’s throwing power.

In terms of actual gameplay, as you would expect of a game about Ping Pong, the aim of the game on each level is to pretty much throw your ball into a cup, but depending on which mode you choose to play, there is a little more to it than just that. In the game’s Single Player mode, when playing Challenge Mode, which is made up of 80 levels that can be played in any order you wish. Only whilst the main goal is to just get a ball into a cup, with up to 15 balls available in case you need to them. Only in addition to main mission there are 3 sub missions to every level that will ask you to do things like bounce the ball twice before it goes in the cup, bounce off a red wall and even throw the ball into a certain coloured cup (different coloured cups awards different amount of points and should you be able to get another ball in the same cup, you will be able to get a chain bonus that rewards more points.)

However in Single Player’s other mode, Score Attack, the goal is far more simple, get as high a score as you possible can on the same 80 levels seen in Challenge Mode, only here you absolutely have to try and make the most out of each of the 15 balls you’re allowed to throw, whilst contending against things like obstructions in the form of metal blocks, switches, warps, cushion blocks, platforms that rotate and even fans. But even though Score Attack is a more enjoyable mode than Challenge, it’s not by much.

What is Super Ping Pong Trick Shot’s overall best mode though, is 2 Player vs Mode. Although it may take some convincing to get someone else to play Super Ping Pong Trick Shot with you and there’s a lot less levels as there are only 10, 2 Player vs Mode is fun and quick thanks to timed matches. It also shakes things up by instead of making the battles being a straight up “who can get the most balls into the cup competition” and comes with three different items that will either help you directly like multiple balls per throw, or hinder your opponent, as a block is placed in front of them, or paint temporarily covers their power gauge, but just because the 2 Player battles can be enjoyable, a lot more could have been added to it, to make it not just better, but the defining feature of Super Ping Pong Trick Shot, but sadly this is not the case.

If you’re looking for a cheap game to buy from the eShop, Super Ping Pong Trick Shot is as good an option as any, but that and it’s good controls, is all it really has going for it. There’s nothing visually to enjoy, it’s best played as a multiplayer, which means you will need a friend to play it with you and unless you really, really get into it, it’s not something you will play for days on end. So unless you are into your ping pong games, Super Ping Pong Trick Shot is a game you would be right to pass on.