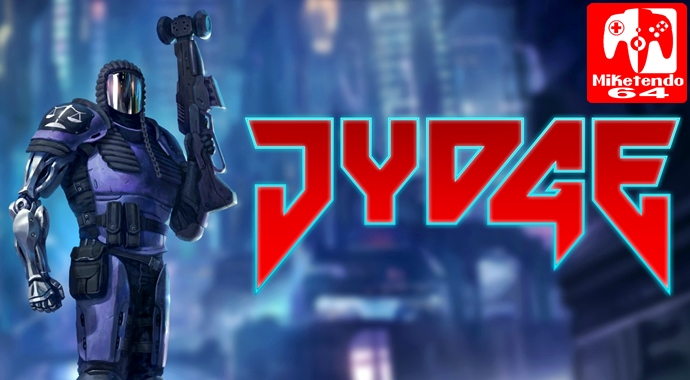 Alright, let’s just get this out of the way now. Yes, they actually decided to call the game “JYDGE”. Yes, they continue to substitute the letter Y for various other vowels throughout the entire game. And yes, it’s painfylly stypid. But if you can look past the developer’s tenuous grasp of the English language, you’ll find an outstanding top-down shooter that’s easily one of the best eShop games of the year.

I know next to nothing of the Judge Dredd series outside of a casual Netflix hate-watch of the terrible 1995 Sylvester Stallone vehicle (starring funnyman Rob Schneider!), but I’ve got a sneaking suspicion that the devs behind JYDGE have read an issue or two. After all, you play as one of the titular law enforcers in a “mega-city”, serving as judge, jury, and executioner for any criminals who dare to engage in illicit activities within a 20 mile radius. After seeing countless tributes like AM2R and Pokemon Uranium get slapped down by DMCAs it’s nice to see a developer who’s finally realized that they can just slightly reskin their blatant fan game and sell it as their own IP, even if the whole affair does feel a bit unimaginative as a result. Ultimately though, the biggest selling point of JYDGE has nothing to do with its less-than-original premise.

Similar to most top-down shooters, the game has you running through a variety of rooms mowing down opponents with a flurry of well-placed bullets while making sure not to get hit by any of theirs, sometimes while achieving a secondary goal like rescuing hostages or gathering evidence. Though you can do all this in a straightforward manner by following the basic paths set up by each level layout, what really sets JYDGE apart is the massive amount of destruction possible in the environment. See an enemy standing next to a window? Walk right though it and pump that chump full of lead. Need a way to save hostages quickly without putting them in harm’s way? Blast through walls to create your own personal shortcut. There are tons of ways to tackle each area, and the game encourages you to try them all. Although there are “only” 18 levels, each one has three missions that range from reaching the goal in a specific amount of time to avoiding detection by any of the enemies, as well as alternate Hardcore, Grim, and Nightmare versions of each level that offer even more missions to complete. And I haven’t even gotten into the REAL meat of the game… the customization.

JYDGE has a seemingly endless amount of ways to alter your weapons, stats, and abilities using the credits found in each level. First up is Cyberware, which grants passive abilities like increased health, speed, and stealth, as well as less standard bonuses like a pulled-back camera view or friendly drones who attack enemies for you. Your trusty Gavel Mk I gun is no slouch either, with numerous different bullet types, special weapons, and Gavel Mods. Your bullets are infinite and allow you to let loose with such weaponry as shotgun shells, lasers, and ion energy, while special weapons like rockets and C4 mines are far more powerful but have limited ammo. Every bullet type and special weapon can even be upgraded for additional damage, so you never feel like any particular gun becomes outclassed by the others. Finally, Gavel Mods offer helpful effects like preventing your projectiles from harming citizens or letting your melee attacks deflect bullets. With so much to buy you’ll be thankful that the game allows you grind for credits on previously completed levels whenever you want, even letting you keep the spoils from runs that end in your untimely death.

For the truly decicated Jydges out there, there are even ultra-rare collectibles to find. Getting to some of them can be as simple as shooting at a hidden wall and finding a room containing one, though others require you to perform a specific task in a level to open an elevator that takes you to a secret area. These secret areas tend to be slightly less hectic than the regular levels, but completing them is worth it as collectibles can tweak the gameplay even further. For example, navigating through a hellscape of mines and exploding canisters will reward you with a smiling fire icon that allows the option for friendly fire in co-op, while facing off against a lone man in black earns you a stylish pair of glasses that puts a pixelation filter over the graphics.

Visually, JYDGE is no Hotline Miami. The menus are quite sparse and the in-game graphics are as generic as they come, with no attempt at stylization or flair beyond a bit of neon here and there. Even the “cutscenes” between areas basically just consist of a rotating logo with voice acting so flat and robotic that it very well could be straight from a text-to-speech program. There are a variety of tracks to hear during gameplay and they’re kind of catchy after a while, even if most of them have a tendency to sound like unfitting rap backing tracks sans the vocals. The only real personality to the game is found in the hashtag-filled flavor text on the loading screens that some will find amusing and others will surely cringe at. If you want a compelling story or innovative presentation you’re not going to find it here, but if you want a game that absolutely nails the top-down shooter genre then look no further.

Halt, citizen – this is one game you can’t afford to miss. Between the multitude of missions, the variety of mods and upgrades, and the just-plain-fun gameplay, JYDGE proves to be one of the finest titles you’ll find on the eShop.