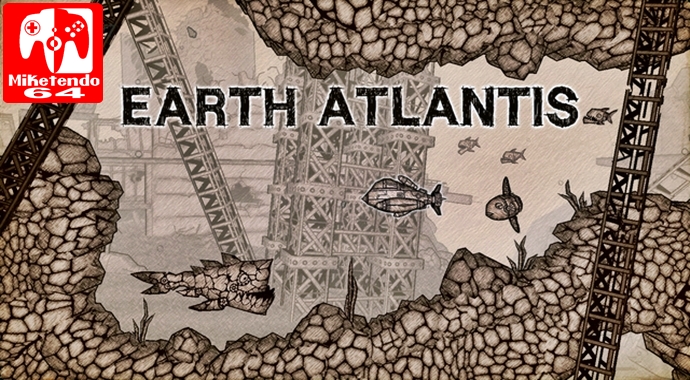 Earth Atlantis is a side-scrolling shooter game where the objective is to hunt down machine-hybrid monsters underwater in a post-apocalyptic world. As a Hunter, you must destroy the large sea monsters while exploring and finding power-ups for your ship.

It’s an emotional roller coaster. One minute, you’re cruising through the water destroying minor enemies here and there and the next you’re fending off a swarm or in the middle of a heated, intense boss battle! This is the kind of game that definitely keeps you on your toes.

The gameplay itself sounds simple, with the game being a side-scrolling shooter. Your original little ship moves along in the water with the very basic attack being a bullet, if you will, that shoots out the front. While destroying the lesser monsters as you explore the world, you may gain power-ups which expand your weapon arsenal.

The more power-ups, the more bullets. You’ll know when your original ship is fully powered when you have five bullets shooting out from the front and five shooting out from the back. There are also crates scattered about the map, each one holding a random weapon. You can find Electricity, Missiles, Homing Missiles, or Bombs. You’re allowed to get four of the same weapon at once – four homing missiles are awesome – but if you find something different you have to swap it out.

Rather, you get the choice to swap out your weapons if you find a new one in a crate. It definitely makes you think strategically, especially if you’ve peeked in on the next boss. Which would be more effective against the boss, bombs or homing missiles? Do you take the chance to explore the rest of the map and crates to find four of the same weapon, or do you take what you can get and go right after the boss?

That’s true, it definitely depends. Sometimes we’ve charged right into the bosses and other times we were so careful and played it safe. And you have to play it safe a lot because the bosses each have three powers they throw at you. Sometimes it’s easy to dodge, but the hits do take damage and all that damage adds up fast. If you so much as touch the boss just a little, you get KOed in one hit. Then it’s back to square one with your single bullet and you have to find your power-ups all over again.

That was probably the most frustrating part of the game, actually. Whenever you died and respawned at the last save point, you were stripped of all your power-ups and weapons. Depending on the drop rate, it could take some time to mindlessly kill the smaller enemies to get all of your abilities back, only to accidentally get KOed in one hit from the boss when you try again and you’re sent back to search for power once more. At the beginning, it seemed like a good challenge and searching for weapon crates made the exploration more enjoyable, but after dying to a certain boss a few times, it became tedious.

It was long. You’d spend 20-30 minutes getting your power-ups and trying to find a good amount of weapons only to spend 2-minutes on the boss. Then repeat. You can leave the boss areas and we sometimes did if we were getting too low on health. However, when you go back there the boss’s health was at its max again. It was annoying to say the least, but at least it cut out some time.

I want this soundtrack! If it exists, let me know! The music is brilliant, perfectly tuned for the world, whether you’re exploring or in a boss room. The exploration music for the sections of the map just makes me want to go on an adventure!

Yes, the music is wonderful. The menu gears you up for adventure, but once you’re in the game it’s calming as you explore. Then it amps up once you have a cluster of enemies or fighting a boss. The music choices can get repetitive the longer you’re in the game, but I didn’t mind because I really enjoy it.

The music kept you in the game, and just sounded heroic. The graphics also were wonderful, with a “sketching” like style. While some of the enemies are nearly camouflaged with the background, it was unique and fun to take a moment to really look at it. The backgrounds especially were beautiful!

The graphics were unique and I enjoyed the style a lot. I do like some color and it seems a little “boring” on the outside, but it worked for this game. It was hard to see enemies at times and you didn’t know what was part of the background and what wasn’t, but it made the exploring all the more fun.

I loved it, in all honesty. It reminded me of old-school pirate maps, if you will. The colors and sketchy designs reminded me of rolled-up parchment, for some reason. It seemed like a homemade map, one that’s charted as we explored under the water.

96% of the Earth is underwater. Humans are scarce and machines have adapted to the new lifestyle by turning into robotic sea creatures. This is a post-apocalyptic world where you are a “Hunter” and must track down the many sea “Monsters” that lurk in the area.

Before dropping you in the water, the game opens up with this small description. There’s over 30 large sea monsters to hunt down, monsters that have destroyed the other hunters before you.

And then we come along in our rinky-dink ship. It’s an interesting concept for a game.

I wouldn’t mind picking up this game again. There are multiple modes to explore, various difficulty levels, and a few different ships to unlock to dive under the sea with. The game itself is good for a quick round if you wanted to find and (attempt to) defeat one boss per run, but it’s also a game you can easily find yourself lost in for some time, enjoying the graphics, music, and challenge.

Earth Atlantis isn’t a bad game, while it was frustrating at times. The story is simple enough, the music and graphics were amazing, and the gameplay was simple. However, starting from scratch each and every time you died became tedious and annoying. So you may not be finding yourself playing this for hours on end.