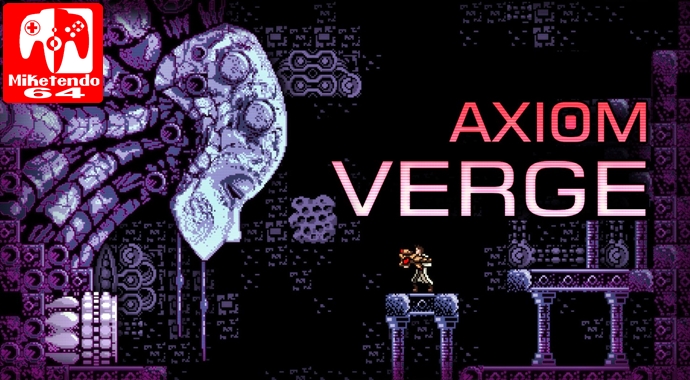 To the distaste of some, Metroid: Samus Returns was only released on Nintendo 3DS family systems, but if it’s true Metroidvania action you’re after for your Nintendo Switch, then look no further for Axiom Verge has arrived.

Developed by the one-man band that makes up Thomas Happ Games, aka Mr Thomas Happ himself, Axiom Verge was first released in 2015, then brought to the Nintendo Wii U last September. For a long time its sole developer expressed an interest in bringing the game to the Switch and even the Nintendo 3DS, and while a 3DS release has still yet to happen,  Axiom Verge is still pretty much the game players have falling in love with, only a little more different.

While the game is a straight up port of what is available on other platforms, because the Switch doesn’t offer the same “second screen functionality” that the Wii U does, right of the bat if you’ve played the Wii U version and are looking forwards to playing it again on Nintendo’s newest platform, you must do so in the knowledge that you will not get exactly the same experience. Instead what you will get is being able to play Axiom Verge as both a home console game and a full-on handheld game that you can take anywhere, much like you could with the PlayStation Vita version. 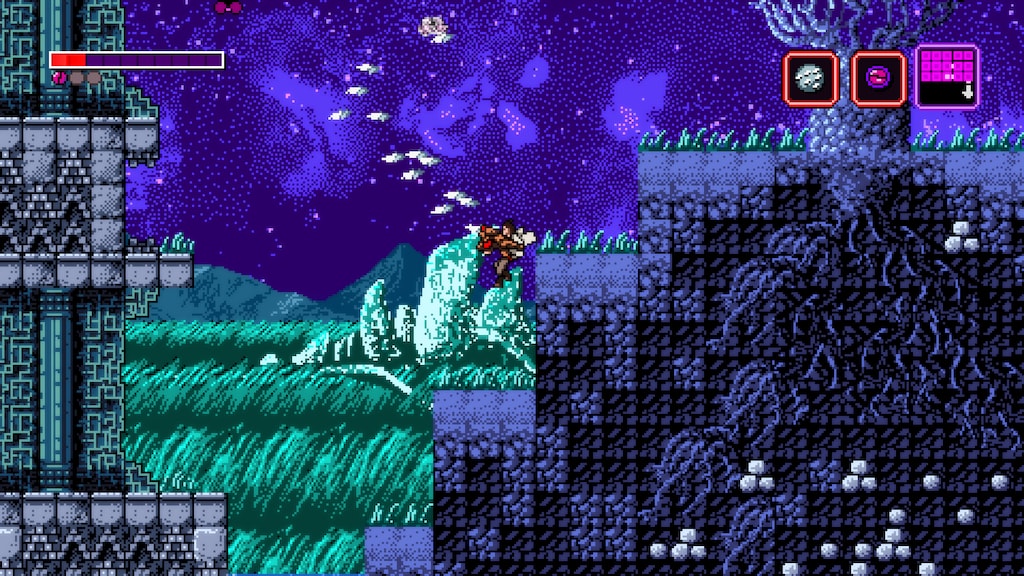 Regardless of it being an old game though, there are still many players out there who have yet to experience the maniacal and menacing delights of Thomas Happs’ marvellous creation and I’m one of them as until getting my review key copy, I had yet to actually experience it, so with that thought in mind, as you can expect, this will be a proper review that covers the many aspects of the game and firstly we’re addressing it’s Metroidvania status. Axiom Verge isn’t just another game that claims itself to be a Metroidvania inspired game that does its best to capture the essence of the series, but it is a full on Metroidvania game. In fact it is so Metroidvania in the way that it is presented (visually, musically and implemented upgrades,) that the best way to describe Axiom Verge is to say like this “Axiom Verge is a Metroid game, just without Samus Aran, the Metroids and involvement from Nintendo.”

It doesn’t just play like Metroid and Metroid II: The Return of Samus, and look like a modernised version of Metroid without the whole 2.5D effect used by MercurySteam for Metroid: Samus Returns, but the created atmosphere is so perfectly done that you could easily mentally picture the game’s protagonist Trace as the infamous Bounty Hunter and the game will still be perfectly enjoyable, if not a little more so as you can pretend it is the Metroid game the Nintendo Switch is currently missing. (Yes Metroid Prime 4 is in development for Nintendo Switch and its fantastic news, but let’s be honest, a 2D Metroid is a greatly welcomed edition as well.)

Only Axiom Verge is not a Metroid rip-off as in actual fact, it tries and succeeds in being a modern evolution and is a game in its own right. It’s also a game that revolves around mechanised alien machines, a scientist sent to another world and a whole lot of shooting, but that’s just a fast and loose summary of Axiom Verge’s story, so here’s a properly explanation. Axiom Verge is a side-scrolling action-adventure game that that throws players into the shoes of Trace, a scientist who at the very beginning of the game, endures a crippling injury, only to  wake up in an ancient, yet sci-fi rich world of Sundra.

But there isn’t that much time for sight-seeing, as a mysterious voice calls out to Trace and requires his assistance, only the voice does not belong to a human, as it belongs to Elsenova. Elsenova is a Rusalki, which in other words are giant war machines created by the Sundran civilisation. Due to a mad scientist by the name of Athetos, the Sundran civilisation was wiped out and while they might not be around anymore, Athetos still is and Elsenova requires Trace’s help to stop him, only with this game being Axiom Verge, aka weirder than weird, the plot goes downright insane, as Trace and Athetos, are the same person, only Athetos (Greek for “without place”) is the original Trace who first arrived on Sundra, whereas the playable Trace is a clone. Now there is even more to the game’s story than what I’ve mentioned already, but as a game that everyone hasn’t played already, I have “spoiled” enough, although I will just say that depending on how much of the game you have completed prior to finishing, you will be presented with one of two endings and while the first one is fine, the other will mess with your mind even more so than Axiom Verge already has. 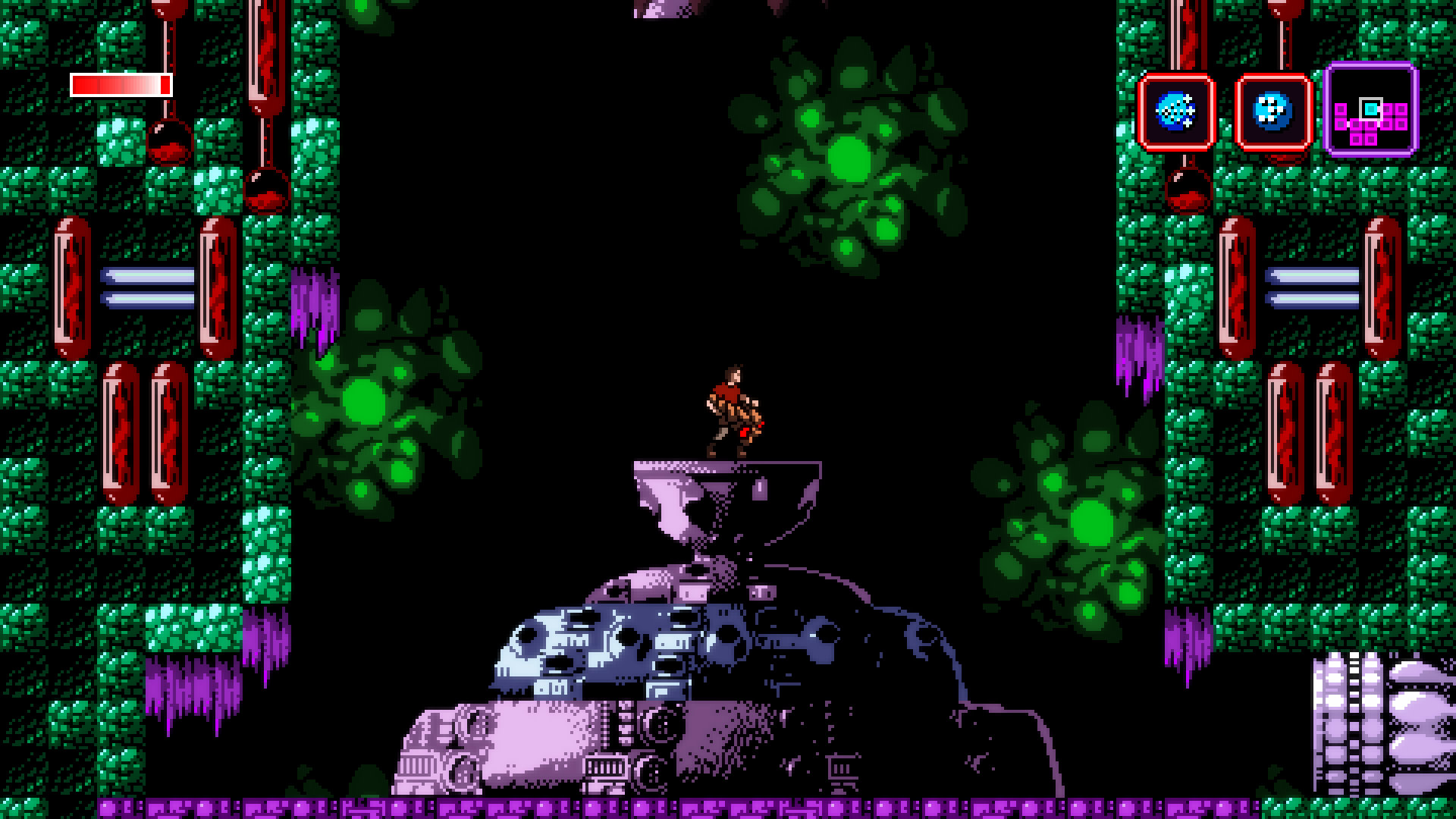 As for what you get with regards to the game, although the Story Mode is the main bread and butter of Axiom Verge, there is a Speedrun Mode, which is more of the same, just a bit different as there is no content and things like dialogue and cut-scenes are skipped in a bid to see speedrunners and streamers advance faster and more efficiently than those who would rather stick to the easier to complete main game. Only just because it’s easier, it doesn’t mean it is easy. The game is as hard as any Metroidvania game and it only gets worse the deeper down the rabbit hole you fall, and you’ll know things are really bad, when you notice the change of music and how nightmarish your surroundings appear and nightmarish in this context means like something you would see in a nightmare and not that the game’s graphics themselves look nightmarish, as they look more like a complete work of art.

In addition to tougher enemies, boss battles that might just make your hair stand on nerves and frustrate you endlessly, as the same battle forces you to die and wake up in a resurrection-like chamber, where life can be restored and your game can be saved, before having to take on the boss all over again, there’s also a whole lot of exploring to be done. For a game that can be completed anywhere between 8 to 15 hours that has more than 60 upgrades in terms of weapons and Health Nodes, there really is a whole lot of stuff to be seen, collected and used as some of the weapons that are obtainable are absolute gems and can make all the difference, but only if you can find them. So what are you waiting for? Are you ready to brace the madness and lose sight of fact and reason? Because I sure as hell was and now, I’m ready to bring this review to an end.

There is a reason why games like Axiom Verge are received the way the way that they are and that’s because it, like SteamWorld Dig 2, are games that broke the mould. They take what we once knew and held dear to our chests, only to have their developer make it into something that is so much more and while I won’t be bringing myself to give it a perfect score, Axiom Verge on Switch is hands down a game I would recommend to anyone who loves a good platformer, even if they have played it on other platforms. Thomas Happ poured his heart and his soul into Axiom Verge and it doesn’t just show, it shines!