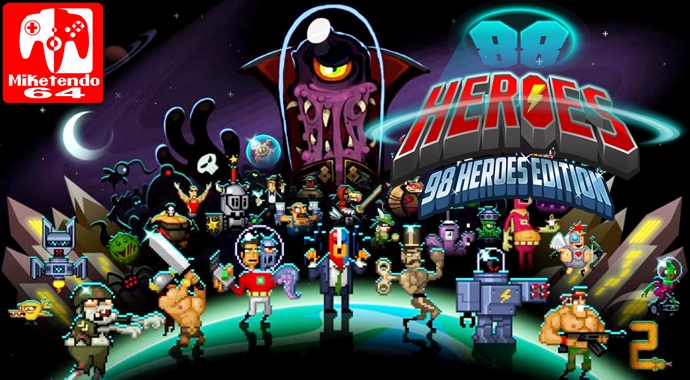 Ever wanted to play a video game that puts a huge emphasis on the number 8? If your answer is “No,” then you might want to consider skipping this review as the game coming under fire this time is of course 88 Heroes: 98 Heroes Edition.

Developed by Bitmap Bureau and published by Rising Star Games, 88 Heroes: 98 Heroes Edition is a chaotic 2D platformer that loves the number 8 in all its forms, only because it is the 98 Heroes Edition, this does of course mean that this is the full version of the game that comes 10 extra Heroes with 8 of them being RSG Champions like Rusty from SteamWorld Collection and Zombie Viking’s Gunborg, and 2 extra characters what were part of the H8 Mode Activate DLC, which was all added to the original 88 Heroes game as DLC and to be real with you, this game was not what I expected and I did happen to all in love it.

As a gamer who was pretty much brought up on platformer games, I have an experienced background, but that background did not prepare me for 88 Heroes and I am glad it didn’t. As a game that has 98 playable Heroes, each with their own quirks and abilities that can either render them a legend or a liability, in addition to a lot to get used to and learn, there’s also a lot of fun to be had as each Hero brings with them a new way to clear a level, and at least 10 ways to fail. By no means are these Heroes ever going to find themselves joining the Justice League, but they do make for one heck of a Suicide Squad, (especially the way I play it.)

However as far the characters go, although there is more to cover, let’s stick a pin in it for now, as right now it is course time to bring up the game’s premise and so as to capture it perfectly, here is the premise word for word:

At 8 minutes past 8 on the 8th August 1988, the world teeters on the brink of total annihilation! Dr.8’s demands are simple, pay 88 Octillion dollars within 88 minutes or 88 thermo-nuclear warheads pointed directly at the Earth will be launched.

Who will save us in our time of need? The Bravest? The Boldest? The Best? No chance!

Enter the 88 Heroes; 88 Heroes of the Strangest, most Pointless Superheroes ever to grace the face of the Earth.

They called the Best…but the Best were busy!

And if you think that’s the last of the 8’s you’ll be hearing about, you’re wrong as although there are only 36 achievements, there is a doomsday clock counting down from the moment you start playing and although you have 88 minutes to save the world, there are 88 levels that require being beaten and your 88 Heroes only have 88 seconds to try and clear it and should one fail miserably, you’ll need to restart the level with another Hero, with a new set of 88 seconds, only don’t expect the doomsday clock to act like the events of your previous Hero’s life didn’t happen, as that little sucker will keep on counting down until you either beat the game, or the game beats you and the world is not saved.

The whole 8 them aside though, in case it wasn’t obvious, 88 Heroes: 98 Heroes Edition is a game with a sense of humour and while it’s absurdity might not resonate with every player, the ones it will resonate with, could very well have them in an uproar and while it is a decent enough game to play that is a lot of fun, it is even more so when you’re watching someone else play it as you take it in turns, but if you’re worried this game might be a tad too hard for you and you will die way to many times when trying to play through the main game,  then worry not because if you do lose every last Hero, you will be allowed to continue, only you will be forced to resume with the last Hero you had remaining before your total wipe-out.

However if you are good, and are able to clear a series of levels/rooms without incident (avoiding making costly mistakes and getting hit once by anything as everything can kill you in a single blow,) then not only will you be able to ensure some Heroes actually live, but you might just live long enough to collect enough coins (88 of them,) to bring a fallen ally back into the fray. Only while it would be great to be able to pick the one Hero you desire the most out of all you have lost, instead you can only choose to restore a particular one out of the options the game gives you, so choose wisely!

Now while not every Hero is actually decent as there are a lot of terrible ones, who are so unique that you don’t actually detest having to play with them, are are some who deserve an absolute mention, so here’s me running through a few of my favourite Heroes, and Heroes whose names I just happen to like: Arach-nerd (half giant-spider and half giant nerd.) Bat Bot (think Batman if he was a robot and just the other half.) Beezlebutler (ever wanted to have the Devil as your very own man servant? Beezlebutler is the closest you will ever get to making that dream a reality.) Boomstick Benny (he who wields such a powerful shotgun that every time he fires it, it sends him flying backwards.) Captain President (a President so kickarse that he has his very own Uzis, only don’t go expecting being able to fire them at enemies, as he’s too busy shooting the sky.) Dino Pop (think Yoshi meets Birdo.) 0088 (a James Bond who doesn’t get the girl.) Dyna Knight (he has an explosive personality), Harley Trotter (a skilled basketball player who knows how to dribble and jump.) Laser Kittie (a killer cat that is so evil and powerful, it can fire a devastating laser straight out of its mouth.) Nibbles the Destroyer (a large-sized hamster in a wheel.) Pir8, (a Pirate with a large cannon.) Wang Wei (a Panda so backwards that when you attempt to move it forwards, it goes backwards!) and Zommando (a zombie commando that when it drops its head, and dies, it will actually respawn where it left its head.)

Oh and on the subject of Heroes, while some can indeed deal harm unto those who wish to harm them, there are plenty who are so harmless that they’ll stand still as a fly harms them, which is sort of ironic as there is a fly-like character who can attack and is so cool, he not only is he named Fly Guy, but he actually is a fly that is half fly and half guy, talk about having your cake and eating it too!

Now as for 88 Heroes’ various game modes, believe it or not, there’s not 8 of them, but they do have an 8 in the title. One is 88 Mode, which is the main game, with all 88 levels, which includes 4 areas and frantic boss battles. Another is The Magnificent 8, which is exactly the same as 88 Mode, only with The Magnificent 8, you actually get to choose the 8 Heroes you want to play as, provided you have played them before, as that is how Heroes and even The Magnificent 8 mode is unlocked. Then as well as a Solo mode, there is of course H8 Mode, which is the H8 Mode I made a reference to earlier on, which is made up of 8 levels that are so evil and dastardly that they make Dr. H8 look like a good guy, which is just wrong. Other, than his voice and his lines that are just brilliant at times, there is nothing good about him, especially when in every mode of the game and even you’re just navigating the menu’s he like you, is watching the action on a screen, only on his screen he just sees the game and the Heroes, whereas on ours, we see him and his tea carrying subordinates, who are looking at the screen of the ensuing action.

As for the levels and the variety of enemies 88 Heroes: 98 Heroes Edition goes, I’ve got to say, they’re not all that. I love the enemies, but there’s just not enough of them and although that’s one gripe, my biggest has to be the actual levels. The retro look is good and the levels are quite big, only because of time constraints and not wanting to lose Heroes unnecessarily, there is no time to check out each level, so if you were hoping to be able to do some exploring, you can think again. 88 Heroes: 98 Heroes Edition is mostly a straight forwards affair that sees you starting on one side of a level, trying to get to the other, to where an elevator awaits to take you to the next floor. But aside from that, 88 Heroes: 98 Heroes Edition is a pretty solid game on all accounts, especially when you can save and quit your game at any time, just by quitting, so if you don’t have enough time to do the entire game in a single playthrough, you can always put it down and resume it a little later on.

Despite a borderline obsessive fixation with the number 8, 88 Heroes: 98 Heroes Edition really is a fun game that keeps its charms, no matter how many times you’ve played, so if you’re thinking it’s a game you’ll only complete once, it is something you will play many times over as it is something you can always come back to and will always have you smiling, even if you just are playing on your own. Sure the price is a touch steep, but for anyone who takes the dip, 88 Heroes: 98 Heroes Edition does prove itself of being worth it in the end.