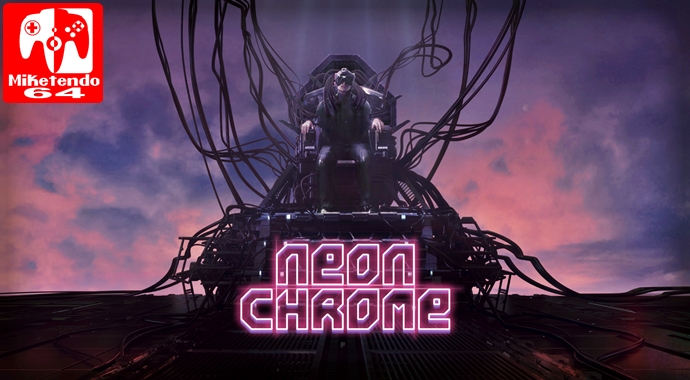 Neon Chrome brings top-down twin-stick shooting to the Switch in a game that takes the fast-paced ultra-violence of DOOM and places it in a rogue-like environment. It can be good fun, but it is very difficult and relatively shoddily made.

The frenetic gameplay of Neon Chrome takes many cues from bullet hell titles. You’ll be constantly on the move, shooting down enemies with a twist and turn of the second stick. Bullets from enemies (ranging from simple gun-toting soldiers to little pink robots that multiply when defeated) fill the screen – it is your job to not only avoid incoming fire, but to dish out the pain in equal measure. It’s a fine balancing act, but you’ll feel utmost satisfaction from playing through a clean run of one of the game’s many randomly generated levels. Heck, even getting through a stage without dying is a satisfying feeling.

Neon Chrome is no walk in the park. You’re dropped off in an unforgiving environment controlled by the Overseer – a tower block that has been overrun by dastardly enemies. In some neat little scenes with big neon writing within the game’s world (it’s nice to see a game have fun with its subtitles in a visually interesting way), a deep, booming voice tells you essentially that what you’re attempting to do is a fool’s game, and at times, it sure does feel like one. Neon Chrome is so difficult that at times you just have to let yourself die in order to improve.

This is where the game becomes smarter than your average twin-stick shooter. When you die, that character stays dead. Permadeath can scare people off games, but it is used well in Neon Chrome. Yes, your character stays dead, and you lose all of the equipment and stat boosts you gained over the course of that soldier’s life, but with death comes rebirth. When you die you are “disconnected”, taking you back to the base of your operations, where you control an unknown hacker who can take control of soldiers in a state of cryonic sleep. It’s all pretty sci-fi and quite neat. When you are the hacker, you can wander off to the top of the screen to purchase upgrades with money you have built up along the way. This can prove extremely useful.

You can purchase particular weapons, stat boosts to features such as health, weapon power and luck and you can buy equipment that really helps you out with bonus speed, health and defence. You can tailor the game to how you want to play, as long as you can afford it. Once you’ve spent your money on upgrades (or not if you’re hard as nails and don’t need no help from nobody), you sit back down in the immersion chair and can take control of one of three choices of soldiers. There are hackers (who can hack into certain doors and treasure caches that no one else can, along with their trusty little robot helper), soldiers (who deal more damage) and assassins (who can go unnoticed in the shadows with a nice little boost in speed) just to name a few. You’ll find the soldier class that works the best for you with all the dying you’ll be doing. There may also be a finite amount of characters to play as; I used 29 of them to finish the game in just over six and a half hours.

Personally, I found that to get through the game, I’d need an assassin equipped with all the extra health and weapon damage I could afford, with a standard SMG to blast through all the enemies that dare stand in the way of my dreams; the small boost in speed and ability to stay hidden for a bit of  respite proved useful in the latter stages of the game. In each stage you will find loot, such as new weapons, secondary equipment (grenades, micro rockets and shockwaves to name a few), ability node (cybernetics) stations that give you handy upgrades such as turning 15% of your collected energy (which depletes when you use your secondary equipment) into health and boosts to overall defence, health and reload speed for example. Very occasionally you will find a health station (praise be), but these are rare.

Indeed, Neon Chrome will force you to get through five difficult stages and a boss battle with just one or two healing stations. If you die, even during a boss battle, you will have to start from that floor all over again. The stages are short, but to lose all progress after playing the game for over half an hour can get infuriating. Smaller floors would have been preferable. At least twice one of the game’s troublesome bosses killed me, when their health bar was all but empty, having to start from the very beginning all over again. You can play the game in four player co-op, but I didn’t get a chance to try it out as I only own one set of Joy-Cons (forgive me). I’d imagine that the game is better and easier in co-op, but it could up the amount of enemies, so who knows? All I know is that it is tough as nails when played alone.

Neon Chrome can be so difficult that it stops being fun. The game is addictive to some extent, but after being forced to start a floor all over again for the fifth time you’d be forgiven if you just stopped playing. You’d be forgiven, too, if you asked for a nicer looking game and a better soundtrack. Indeed, the graphics are poor. It looks like a high-definition 3DS game, but instead of a slick framerate, there are stutters throughout – it’s not game breaking, but it shouldn’t happen. Enemy designs are dull and the first boss is re-used twice later. The lighting is tame and explosions look poor. At least enemies explode into a spray of blood and guts when killed (the blood stays on the floor, too). I was hoping the game would receive something of a boost when played in the Switch’s docked mode, but this was not the case. It looks just as bad and runs just as poorly when played docked or as a handheld.

The soundtrack, meanwhile, despite containing 13 tracks, sounds more like one repetitive song, played repeatedly – it’s ridiculously loud on your TV too. The sound design of the guns, voice-over and other general effects is quite strong, reminding me of the insane pace and boom of DOOM, but the soundtrack is plain bad. There’s a fair amount of smarts behind Neon Chrome’s frenetic and difficult gameplay, but it is held back by poor visual design, a poor soundtrack and dodgy design decisions such as forcing you to replay every stage of a floor no matter how far you get into it.

Neon Chrome is a decent rogue-like twin-stick shooter that is probably better when played in co-op, but it is a frustrating experience. For every smart design choice such as its permadeath feature and levelling up systems, it is held back by something equally annoying. The game looks poor and bizarrely runs quite poorly, it features a laughably bad soundtrack and it forces you to play through several levels at once, taking you right back to the start if you die. To be fair, though, for £12.99 you get a decent top down shooter with some smart gameplay hooks that ups the ante and improves loot drops each time you beat the game. A frustrating experience.