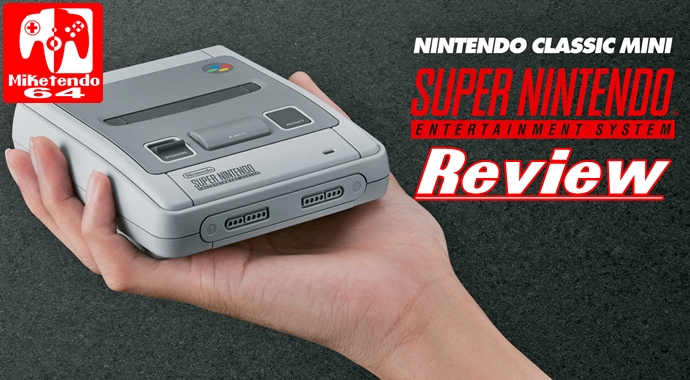 [Review] SNES Mini (It’s like holding your Childhood in a Single Hand!)

While the 90’s may have been the decade that saw the release of the Nintendo 64, it was also the decade where all three variations of the Super Nintendo Entertainment System step on to the scene and now they’re all back, but a whole lot smaller!

From being a huge chunky piece of hardware that birthed a generation of gamers who are still playing videos game, it is now a console that can fit into the palm of almost anyone’s hand and is far more accessible than the NES Mini ever was. Nintendo said they were going to produce more this year and they delivered, because even without pre-ordering, we were able to waltz straight into our nearest GAME store and picked up a couple of them.

Still, as great as it is to have a piece of our childhood back in our lives for Mike and I, we can not forget the fact that the latest Nintendo Classic Mini is more costly than the last one and has less games. (NES Mini was available has 30 built in games, compared to the SNES Mini which only has 21 games.) Then again, just because the new miniature console does have less games, one of the games is of course the “long lost but now it is back” Star Fox 2 and games such as Super Metroid, The Legend of Zelda: A Link to the Past, Super Mario World and even 2 player Secret of Mana.

Those four games aren’t just great, they are superbly fantastic and paved the way for what games on Nintendo platforms could be like, as well as inspiring developers to make games for non-Nintendo platforms to be even better as well and thanks to things like a HDMI output that perfectly captures the games we know and love in almost the very same way we remember them, so at the very least the game’s library is more than ideal. Sure you could argue there are plenty of games missing, but it has a strong library nonetheless and with the SNES Mini supporting plenty of 2 Player titles, 2 remotes and necessary cables straight out of the box, that the moment you unbox it, you can literally plug in and play with a friend.

But what about the actual hardware? Well, while the SNES Mini does indeed match its previous incarnations visually, they do not work the same way, as the remotes for the SNES mini do not plug into the exterior “ports” like you think they would, but they plug into the ports that lurk behind the ones that are just their for show, and while the controls for the SNES Mini are a near match to those used with the original SNES, while they do feature a longer cable than the one the controls for the NES Mini had, you’re still going to have to park your rump right up close to whatever TV you have your SNES Mini connected into.

Or you can opt for a different route and dig out your actual controllers for a SNES, rig it up to an adapter (like the Hyperkin Controller adapter,) to give yourself even more cable room, or just use an 8bitdo Retro Receiver if you have one, as they work just fine! Still, there’s more to the SNES Mini than just that as Save States are back, with four per game and they even work for games that didn’t have save states for games that didn’t even have them the first time around, and for those interested, save states be safeguarded so no one can come along and accidently deleting it!

Also new for the SNES is gameplay rewind, which in order to try out for yourself, you will need to tap the reset button and dive immediately into the save state menu, where upon pressing the X button, will allow you to watch a quick replay from your current game in progress and even jump back in time, so as to try out a different path and “repeating” a mistake you unintentionally made and since SNES games were almost as hard as NES ones, rewind gameplay isn’t just a welcomed feature, but a necessary one that goes down great!

Long story short, whethger you like it’s library of games and an take or leave the SNES Mini, it is a perfect recreation of a time when Nintendo gamers the world over, were mere children, releishing in what was at the time, some of the most ground-breaking games ever. By no means is the console perfec, but it’s fantastic, does has 21 games, 2 controllers instead of the one like the NES Mini only came with, but it only costs a little bit more than some AAA titles that have recently released on Switch and I don’t know about you, but choosing between FIFA 18 and a SNES Mini, the choice is a simple one. The SNES Mini is a console that is just too good to pass up, even if you weren’t born pre-2000!