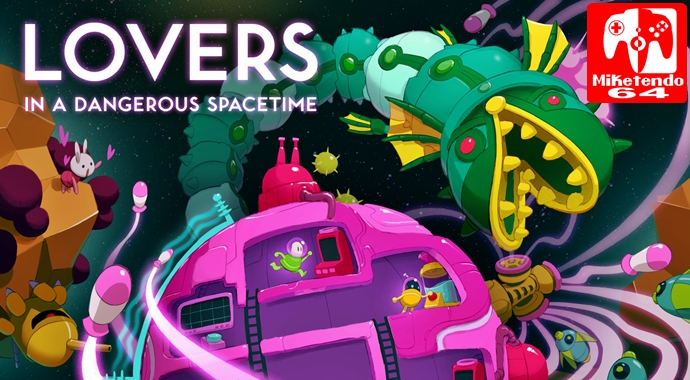 Looking for an indie game you can fall in love with on the Nintendo Switch? If you’re answer is yes, than maybe you should consider checking out Lovers in a Dangerous Spacetimes, it may not have Love in the title but it has “Lovers!”

Developed and published by Asteroid Base, Lovers in a Dangerous Spacetime should very well be a game some of you have heard about since it the art is by Matt Hammill, its name is a play on words of Bruce Cockburn’s “Lovers in a Dangerous Time” song and has received plenty of praises and accolades before and long after it initially released back in 2015. But if the game does not ring a bell at all after all that, than not to worry because I can tell you exactly what kind of a game it is!

With graphics deliberately meant to be similar to those you could expect from Sailor Moon and Katamari Damacy (a third-person puzzle-action video game made for the PlayStation 2 by Namco,) Lovers in a Dangerous Spacetime is a space based game about spaceships, love, anti-love and some really cool and cute playable characters! The story may be a little too cutesy-cute for some as it is essentially about love, with the game’s story being set in a faraway future where scientists built a machine to harness the “most awesome force in the universe” (love,) but don’t rule out Lovers in a Dangerous Spacetime just yet!

While everything may be peachy to start with, things soon go wrong when the Ardor Reactor, which unites all civilisations across the galaxy and is defended by the League of Very Empathetic Rescue Spacenauts, aka The Lovers, comes under attack.an error in the XOXO matrix occurs and with it, a sinister dark force known as “Anti-love” seeps into reality and causes an explosion that rips a hole in spacetime and tears the Ardor Reactor apart.

With Love tarnished, Anti-Love starts to make its mark upon the universe, but with The Lovers still alive and kicking and Dr. Hopsy-Flopsy on hand to guide them, it’s not that long before The Lovers can rise to the occasion and do what needs to be done in order to bring love back to the fourfold in a universe where love is on its way out. By no means was I smitten with the story, but hey it’s a game where I can be play as 1 of 5 available Lover characters at the start, board a spaceship and take the battle to the enemy whilst a lovable Space-pet joins me. (Space-pets are pets you have in space that can accompany you and help you operate the spaceship in which must be flown and defended at the same time, or at least flown and attacking.)

Unless you and a full group of friends are playing, odds are the majority of the time you play Lovers in a Dangerous Spacetime, you will be on your own, so your Space-pet comes in handy as you can order it to control one of your ships four cannons to attack anything that moves whilst you fly also Space-pets are only available when playing on your own, so if too want an AI controlled pet to keep you company, single player is the only way to make it happen. Still, you can choose not to fly and both take a cannon to attack, but even on the game’s easiest setting, the two of you will have your work cut out for you as Lovers in a Dangerous Spacetime can get very chaotic in no time at all!

The forces of anti-love do not do things by half and when they swarm you when you’re out and about, undergoing the game’s levels that make up its 4 campaigns, which all have an end level boss based on the constellation in which the campaign is named after. The good news however, is while you are off battling them and rescuing helpless caged animals such as bunnies, ducks, foxes and frogs, there are some really fancy gems that can turn the tide to your favour. The gems are the Power Gem, the Beam Gem and the Metal Gem. Should you prove successful in securing them, you can put them wherever you want as long as it’s on one of your ship’s utilities (steering, shields and Yamato cannon, which is a prototype station that isn’t approved for field usage, but it does pack a lot of power can requires being used at the right time and never before!)

With the gems, once placed, the will then reader the utility you placed the on, with a different effect, such as a Power Gem will cause the ship to fly faster, but a Beam Gem will allow your thruster to charge up and fire a large beam behind you that deals damage to all that come into contact with it, so it is handy as it allows you to attack and steer at the same time. Sadly though, even if you do everything right and have everything powered up and levelled up and worked out, one trip over to the wrong part of the map and there can be no saving you from the ambush you walked into and while you can replay the level after dying, the level will not be the same again, as they are randomly generated, which means every playthough is different, much like every playthrough with a different group of players and that as they say, is that!

While my Player 2 and I may not have been entirely captivated by Lovers in a Dangerous Spacetime, (probably because we’re too addicted to The LEGO Ninjago Moview Video Game,) it doesn’t mean you and your friends won’t be as it is a gorgeous game to look at and does co-op not just the right way, but the absolute right way, whilst maintaining the right level of difficulties for players of all skills.

*Review Key Provided by Asteroid Base