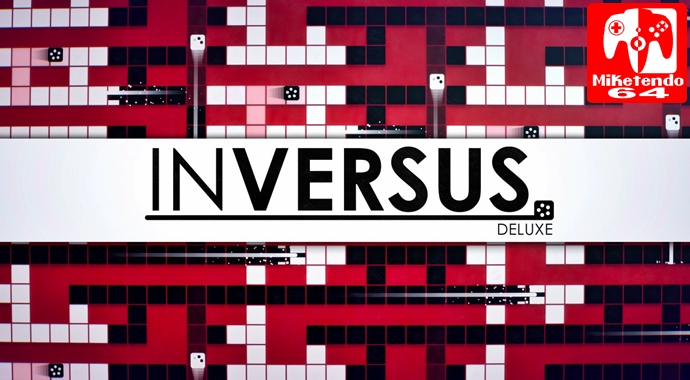 In a poem called “Andrea del Sarto” (aka The Faultless Painter) by Robert Browning, the expression “less is more” was born and while the term may not work so great with video games as small games are usually the first to be abused, INVERUS Deluxe is a game that begs to differ!

Out now and available in the eShop, INVERSUS Deluxe by Hypersect is not a lavish game by any means, but it is a small game with enough variety to it that it could be very well be the game you find yourself busting out just as soon as there’s a crowd of you in the same room! Of course it doesn’t need to be played with others as there is single player content in the form of an arcade mode, where new maps are unlocked by earning another Stars on the map/maps you have previously unlocked/start off with, but if you do find Arcade to be a little too hard on your lonesome, there is 2 Player available for anyone wanting to do some local co-op.

Still I said all of that above and not a single word was about exactly wat kind of a game INVERSUS Deluxe is, so let’s amend that. INVERSUS Deluxe is a top-down grid-like game where players can move their little Square in any direction as they please, as long as they stay on the map. Sure you could try going off-grid, but it’s not going to work and even if the lowest level CPU sees you dawdling by the ledge paying them no attention, they will shoot you and win the round.

Only there is a catch as to how much they can move, for instance the black player can only move over tiles that are white, whereas the white player can only move over tiles that are black. To expand your field of movement, you will want to fire your laser, which can be done via the A, B, X and Y buttons, with each button firing the laser in their associated direction. (Y = Left, X = Up, A = Right and B = Down.) The direction in which you choose to fire will turn any tiles the laser flies over, to the colour of the field you are able to pass over, only the purpose of INVERUS Deluxe is not to try and cover an entire map in a single colour, but to take our the other player, which you will need to do 3 times in order to win the match when playing Versus. (In Arcade the goal is to get as high a score as you possibly can by taking out as many CPU controlled enemies as you can in the given number of lives that you have.)

Now just because the above text does nearly cover everything INVERSUS Deluxe has to offer in terms of game modes, other than more than 50 unique and bizarre levels and Arcade and Versus modes that can be played locally, there is of course online play, which is more of the same, but you can do it online against other players/owners of INVERSUS Deluxe if you don’t have anyone local you can play with and there are also leaderboards, so if setting records is your jam, than all is well.

If it’s not your jam though, there are still plenty of unlockables available thanks to various palettes, emotes and trails, which can all be unlocked via playing the game’s modes, gaining experience and levelling up and if you’re stuck on the whole emotes thing, let’s dive into that shall we? Why settle for just blasting the other players to smithereens when you can hold down one of the directional fire buttons for a charged shot and then release the fire button, in a means to fire three blasts instead of one and then using one of 4 available pre-set emotes to demonstrate your joyous murder? It is after all the little things that bring us some joy!  (There are also power-ups, but I often found them to do more harm than good.)

However you decide to play though, with others or by yourself, there is one little feature I have yet to tell you about and that is the fact that you can continue to play games, even when waiting in an online lobby, so if you feel like dong some target practise before you become the target of a far more skilled opponent, than you absolutely can and while the notion may not seem all that, it is one of the reasons why this minimal game is as good as it is and worth its asking price!

There is a reason why INVERSUS Deluxe has been met with the high praise it’s gotten in the past and that reason is because INVERSUS is just that good. Sure not everyone will like it, as some will find it a little too fast and too hard, but not every game is for everyone. But as long as you’re willing to put the time in, have a friend who will play it with you and a spare few hours, INVERSUS Deluxe could very well be the only game you need, until Super Mario Odyssey releases and you actually enough cash to buy it!