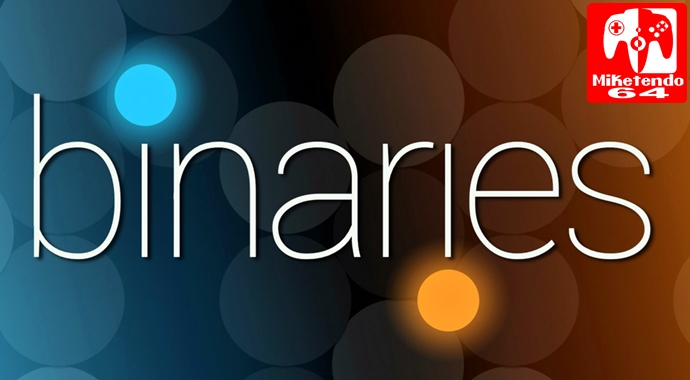 Binaries is a BAFTA-nominated and Game Design Award-winning puzzle platformer from tiny Edinburgh based indie outfit, Ant Workshop and let’s get this straight right off the bat – it isn’t for the faint of heart or those easily frustrated. Don’t be fooled by the opening half a dozen levels, this is an excruciatingly tough game.

The premise is decidedly simple. You simultaneously control two little blobs; hit jump and they both jump, flick the analogue stick right and both blobs move right, you get the picture. Your job is to get each blob from its starting place to its finish goal. Sounds easy enough. However, each blob starts from a different spot on the map and each (although not all) has its own finishing spot. Then, when you take into account that the levels aren’t symmetrical, you’ll start to realise what you are up against.

You’re tasked with ‘just’ getting your spherical avatars to their respective goals, but as you progress, the odd new mechanic enters the fray. And just for good measure each course sets you off against the clock. Depending on how quickly you manage to negotiate each level, you’ll be awarded an S, A or B rank. I had a blast trying to S-rank each level, with many taking upwards of a dozen attempts; perfect for tons of replayability… and added pressure.

Visually, the game is attractive in all of its stark minimalism, and it also has a dynamic soundtrack that adjusts according to how difficult you’re finding any given level, which I found to be pretty cool. But let’s not beat about the bush here, Binaries is all about its punishing brand of – as developer Tony Gowland so eloquently puts it – controller-smashingly tough platform challenges. I couldn’t have coined a better phrase.

Beautiful minimilisim, and, oftentimes, devilishly cunning level design make Binaries a design joy for those not hung up on pixel count and endless swathes of polygon’s. Indeed this two-tone delight is the very epitome of the 2D indie platformer. Ant Workshop clearly draws inspiration from the likes of Super Meat Boy, while it also shares much – though not its gameplay – with fellow recent Switch title, Semispheres. All of which is absolutely fine by me.

I’ve really enjoyed my time with Binaries, but then again, I’m a long-time fan of masochistically difficult platformers that take tons and tons of practice and dedication to master. If that sounds something like you, or perhaps you enjoy endlessly attempting to shave milliseconds off of your best course times, then you’re sure to get mileage out of Binaries. Just be sure to go in with your eyes wide open.