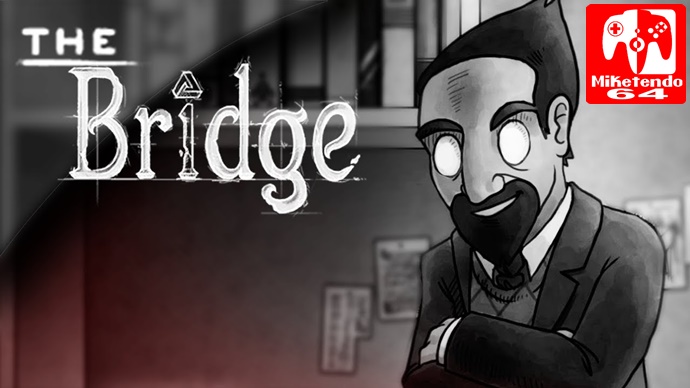 The Bridge is a game that takes everything you know about physics and turns it on its head as you have to put logic and reason to one side to analyse the puzzles in front of you that are designed to test your lateral thinking and to look beyond dimensions as just by simply rotating the Diorama in front of you can make you discover the key to solving the puzzle or complicate it further. You control the movements of an enigmatic man who has to navigate his way through strange, physics defying levels make it to the door on leave. sometimes there is a key to unlock the door, or a large sphere known as the menace that can obstruct your path and cause you an early end. Vortexes and pressure pads can also aid or hinder your progress and thoughtful use of each are key to solving each puzzle.

The game is simple in design and uses hand-drawn lithographic art to set the scene. The controls are relatively straight forward. The D-pad and the control stick allow you to move the character and the L & R shoulder buttons rotate the screen 360° or alternatively you can rotate the actual switch console in handheld mode. A is to accept or continue and B allows you to turn back time when you have made a mistake and want to recitify where you went wrong. Unfortunately, the controls feel quite sluggish and you end up fighting as much against the controls as you do against the terrain of the puzzles you are playing on.

The music though quite repetitive the longer you play does set the tone as you lose yourself in thought and ponder how to do the increasingly difficult challenges that lie ahead. There is the high chance that it will actually drive you to insanity as the puzzles get even harder, to the point where you have to leave the game a few days just to let your mind rest, it came to the point I had to actually turn the volume down just to think before shortly giving up altogether on the tougher levels.

After resting the old noggin and giving the game a fresh go, it is strange how things start to fall into place and that key elements that you missed before seem all the more apparent. There are plenty of obstacles but the biggest of all is the mind’s own perspective. The biggest drawback though is that even with each level being more elaborate than the last. The Bridge lacks any real appeal to make the player want to continue playing,  I tried to give it another try (five times in fact and yet it still fails to captivate me or even motivate me to keep on trying) but I just can’t seem to get on board with the game, and it is a shame because while in concept it seems like a real test of visual wonder, it’s poor controls and bleak aesthetic make me want to play a more colouful game just to take my mind off of the melancholy affair that is The Bridge.

I feel that a game like this can only really be given a 7/10 as there are plenty of other games on the Nintendo Switch that more deserving of $9.99 of your hard earned cash unless of course, you like putting your brain through a ringer as this is definitely a game that will make you think. However, whilst I do enjoy games games that get the old grey matter working, I am too simple minded a fellow to be able to do this game justice.