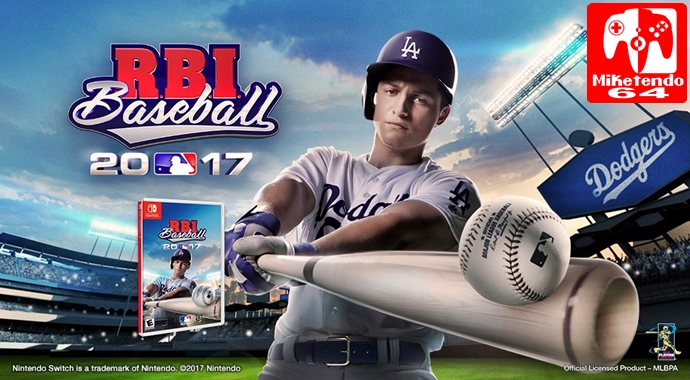 With so many games releasing on Switch on a regular basis, it’s easy for some games to get overlooked in favour of others, and one such title was R.B.I. Baseball 17. So today in yet another Miketendo64 review, we’re asking the questions, were consumers right to avoid it?

As tempting as it may be to drag the answer out, I’m not like that, so I’m actually going to answer the first and then use the rest of this review to explain why, whilst covering all the main details players need to know about the “not so long ago” released sports game. So to answer the question, “yes.” Several consumers were right to avoid R.B.I. Baseball 17, not because it’s a video game centred around baseball, but purely because it this officially licensed baseball sports game, is just not up to the new standard that video game sports fans are used to/demand.

I’m not saying R.B.I. Baseball 17 should be on an equal footing against the likes of the iconic FIFA series, but it would have been nice if it looked and played like a big sports game made post 2011. The menus look great and even some of the details on the players, but when you ignore the players and look at the crowd when playing the game, the crowd simply looks horrible and distracting. As for moving the pitcher, it’s as if the picture is made of cardboard that slides slowly in the direction you move him, before springing to life the second you decide to hurl a fast ball.

Worse than the graphics though, is the controls. As much as I would like to say “everything is explained quite well and is nicely presented in the form of various images and text boxes,” there’s not that many text boxes and when they do show up and you try to do what they say, it almost never works out as half the time it’s as if nothing works like it should and you’ll be lucky to get at least 2 runs against CPU in a single inning, even when you have them on their easiest setting. Yet, when it is CPU’s turn to bat, they can knock the ball out of the park like the professional players the CPU characters are based on and getting thrashed would be fine and all, if it was a 5-10 minute affair but it’s not. Whether you’re playing a Post Season Game, an Expedition game or even Season, each game is a full 9 innings and can last anywhere between 17 and 23 minutes.

The good news however, is that while you can play against CPU, during the season games, you could always just opt to let the game “play” the game for you and tell you if you won or lost and believe it or not, you can win quite a lot of matches this way, but for those of you wishing for some human interaction, you can of course play with a friend and both be equally bad. So while you may lose 21-3 against CPU, you might just be able to hold your own against whoever it is you play against and have the results read a pleasant 2-1 because you both suck. Okay maybe that’s a bit harsh as you both won’t suck, but the ball can be so fast at times and go anywhere it pleases, that it is really hard to get a decent hit.

But who knows? Maybe you’re into a game that plays out like that. (Some people are,) but even with the various teams you can play as and all the different shirts you can go on to wear, there are no online features other than being able to download new rosters, so if you were hoping for some sort of online play or leaderboards, there are none, and for a game that promises “fun, fast paced, high-octane baseball action” in its official description for Switch, R.B.I. Baseball 17 fails horribly to deliver as such as the action is anything but fun!

I really hate to be “that guy” having said everything I have done already, but as great as it is to see R.B.I. Baseball return to a Nintendo platform since it’s been 22 years since its last appearance (Super R.B.I Baseball on the Super Nintendo Entertainment System,) R.B.I Baseball 17 is not a knock-out game. I wished it was as even though I am English, I do like baseball and I’d happily play a baseball video game if it was good, but this is just not the case. I would actually rather get a bunch of friends together and go out to the nearest park and play a game or two than boot up my Switch and play R.B.I. Baseball again.

Although I am normally one who tries to cast light on the positives of a terrible game and offer up an alternative perspective, the simple fact is R.B.I Baseball 17 is not that good a game and I feel those who will enjoy it, are such a small minority that it might I can’t help but wonder if the game was worth porting to Switch in the first place as it is a game I could never recommend. (I wouldn’t even recommend it to my worst enemies, as that would just be so unnecessarily cruel.) Maybe if it had some online functions it would be better, but there’s nothing. Even with a season mode that can have well over 100 games to play, plenty of teams to choose between and new rosters to be downloaded, the game really is bare bones and in my mind, is the Nintendo Switch’s worst game to date!

So to all who read this and considering buying this game, I implore upon you to reconsider. R.B.I. Baseball 17 is not the baseball video game you deserve and it does not deserve your hard earned cash, so do yourself a favour and just steer clear of it. And to those who don’t heed my caution, I hope you find it a more likeable game than I did, because I really tried to like it and enjoy it, but no matter how manty times I played it, or hours put into it, R.B.I. Baseball 17 just did not get any better and such a fate does await many of you who are daring enough to make the purchase and try it out for themselves. So just walk away and forget all about it, because it really is what’s best for both you and the Nintendo Switch eShop.