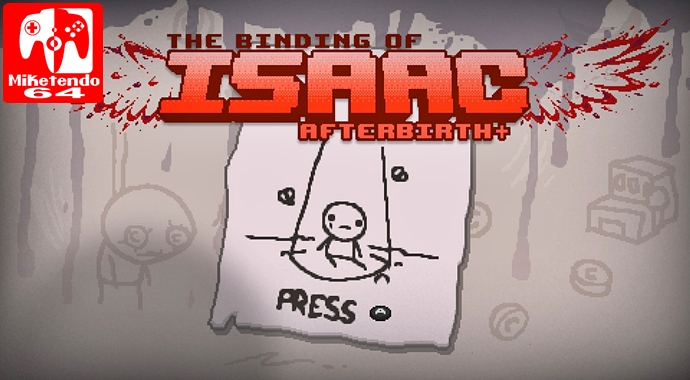 After already making his mark on the gaming industry with Super Meat Boy, in 2011, Edmund McMillen and Florian Himsl released The Binding of Isaac. An incredible roguelike that has built quite the following and refuses to die and after making the rounds, and featuring a number of name changes and receiving extra content, in 2017, The Binding of Isaac finally made it on Nintendo Switch.

Granted The Binding of Isaac: Afterbirth+ has been out since March for North America, it only just come to Europe this month and although our review of Isaac is a little late, in all fairness, our physical review copy only arrived just recently and being as though I have never played Isaac before, I wanted to spend as many minutes as I could exploring the bizarre setting the game possesses, before I sat down to type up my full thoughts.

Only because Miketendo64 were personally a physical review copy of the game, before I even talk about the game, I want to talk about that buying physical gets in Europe, which is an awesome instruction manual like the NA physical version gives you, plus stickers I will never, ever use and an awesome cover art. I know the North American version looks great an all, due to its dark palette and nature, but there’s just something about the European box art. Isaac’s eyes may still be watering as tears are running down them, but with bulged eyes, wings on his back and a mouth-opened facial expression that screams “Come get some,” Isaac truly looks ready for anything, and he has to be, because The Binding of Isaac is not an easy game at all. Suffice to say though, buying the physical version is most certainly the way to go, as it is a nifty little ensemble and it is one I will treasure for a long time.

Enough about the cover though, what about the game itself? Well since Afterbirth+ is something new, it is only fitting that I should make an attempt to cover the new content this game happens to possess, so let’s start with its drop-in co-op mode. When playing through story mode of this top-down 2D dungeon crawler, if at any time a second player wishes to join in and play alongside you, during Isaac’s daring escape, they absolutely can at the cost of 1 of Isaac’s 3 starting hearts (more can be acquired.) If the Player 2 dies though, the empty heart container is returned to Isaac, but they are able to join your side once again, provided you’re willing to give up another of Isaac’s hearts.

There’s also a new Greed Mode, which has Isaac “play through rapidly timed dungeons with waves of attacking enemies.” Should you prove successful and defeat them all, the player will then be able to challenge the Boss and should they emerge victorious, proceed even deeper in the next room and just in case the new content has yet to offer anything you feel makes it worth the extra purchase if you own the game on another platform, there’s more. In fact there’s quite a lot more as there is now a Bestiary that has more than 180 entries with more than 90 of them being Bosses! There’s more items, which includes new offerings and updated versions of previous ones, only because there are well over 600 of them, despite your best efforts to try and remember them all, such a thing is near impossible for a human anyway.

But, funnily enough even if Afterbirth+ didn’t have all the new content, The Binding of Isaac would still be the fantastic must-own title that it is on any platform. It may not have the supreme visuals its box art possesses, or be as long a game as some would like it to be, due to the fact it is a game that can be beaten within half an hour if luck is on your side, but it a hugely rewarding dungeon crawler that has so much to it, like the fact it has 20 animated endings and replay value to it that you could play it every day for 3 months and still have more to see and do.

I would never have thought a game about a boy called Isaac whose endless tears can be used as a weapon to harm demonic monstrosities that look a lot like Isaac, could ever be as amazing as it is, but clearly I was wrong. Everything about Isaac is either gorgeous, creative, or just thoroughly engaging. Sure it can be as dark as a world that only consists of a single colour (black,) and has a very religious theme as a driving point behind it, but it is just fantastic.

I mean it’s the story of a boy who once lived in peace with his mother, even though she was a little obsessed with watching religious shows that one day God started speaking to her and convinced her to believe Isaac was evil. I wouldn’t say he was entirely pure as any boy his age is a little bit sinful, but God convinces his mother she needs to kill him, so she goes after him with a knife. With no other option, Isaac opens a trap door to his basement in a bid to flee, only he quite literally goes from the frying pan and into the frying as cruel horrors and near endless possibilities await.

But just in case the main game, which plays something like an even darker version of The Legends of Zelda: Majora’s Mask in basic top down, arcade fashion with simplistic controls isn’t enough, there’s also a Daily Run mode where new dungeons are updated every day and players can compete against all over Isaac players across the world, in a bid to beat bosses, uncover secrets and escape the dungeon/basement alive in the fastest time possible.  And even then if that isn’t enough and you want to play The Binding of Isaac, but not play as Isaac, there are 12 other available characters to choose between, although they’re completely not necessary as Isaac really is the only character anyone will ever need!

Just bear in mind though, being a roguelike, in the event of your death, you will lose any and all of the cool collectables you were able to acquire during your most recent playthrough, but you will be able to acquire a Seed code that when entered upon starting a new game will let you revisist a “world” you wish to endeavour through once again, or share with friends and see if they can get through it any better and this feature is just another shining example as to why The Binding of Isaac is the classic it still is and always will be.

The Binding of Isaac: Afterbirth+ is everything you could want in a roguelike game. It will test you. It will make you cry, but it will also make you feel like a true Master of the Universe every time you beat it. Plus as stated much earlier on in this review, with this version being Afterbirth+, The Binding of Isaac now has even more content for players to experience, and it is just an utterly fantastic experience whether you play it as a portable game, or go for the full on TV Mode experience.