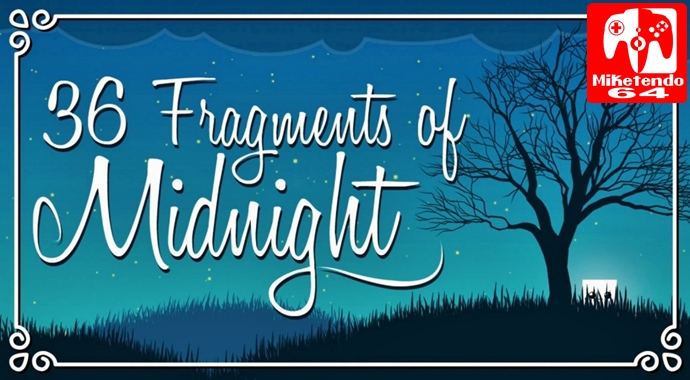 In the last few months, Ratalaika Games has been a right busy little bee, what with being involved with a number of games coming to Nintendo Switch, so it should come as no surprise that the publisher has yet another game getting the Switch treatment.

This time around, the game in question is 36 Fragments of Midnight, which is a procedurally generated platformer developed by Petite Games that launched on Steam on the 7th of August, 2017. Only if I am brutally honest, anyone who is considering getting 36 Fragments of Midnight (priced at €2.99 in the European eShop,) should make sure they go into it with low expectations.

I wouldn’t say it is a terrible game, as I actually did enjoy it, but as a reviewer I need to tell it how it is and that is exactly what I am going to do. So with that in mind, there is a reason why 36 Fragments of Midnight is as cheap as it is. Being a game that is solely about collecting 36 Fragments of Midnight, there is only one level to this game and depending on how long it takes you to find them all, it is possible to beat the game in less than 7 minutes.

36 Fragments of Midnight isn’t just short, it is tiny, but then that’s not necessarily a bad thing, when you take everything else into consideration, which is exactly what we’re going to do now. While the game is drastically short and lacks a title screen, charming background music and end credits, it is in its own way, a roguelike. While the goal is to collect all 36 Fragments of Midnight and return back to the start of the level to receive your special gift, in the event of your death, you will have to start over. Meaning if you are not careful, the spikes, traps and lasers will stop you in your tracks and there are plenty of them all over the level, just waiting for the right moment. So while the game might be short, it does have a challenging aspect to it that will keep you on your toes.

Aside from that though and a timer that only reveals to you your completion time, when you have collected all Fragments and returned to the beginning, that’s all there is to the game. Sure you can move, jump and double jump as well, but gameplay is very minimal, as even the likes of a map, which could have come in handy scouring the Fragments is missing and while things like that are a negative, at the same time it is a positive.

Believe me, I know how easy it would be to shame this game for the lack of effort that seems to have gone/didn’t go into it, but I’m also a half-full kind of a guy, so I like to look at things from the other side of the fence as well. Although not always, less can sometimes be more and I think in the case of 36 Fragments of Midnight, this was the direction Petite Games wanted to go in. I’m not saying it is right or wrong, but they made a choice and the game does work and it can be enjoyed. But if you are going to play this game, you have to be prepared to accept it for what it is and not shame it for not being what it could have been.

Still for the purpose of this review, I did actually speak to Ratalaika Games about 36 Fragments of Midnight’s presentation and although it was considered that things like a map could have been added to make the game easier, Ratalaika Games eventually decided against things like that, purely because they wanted to make sure their port of the Switch and PlayStation Vita versions remained true to the original game developed by Petite Game.

Again, whether the decision was right or wrong, what’s done is done and there’s no going back now, but 36 Fragments of Midnight is a nice looking game with a nice blue and black colouring to it. It is as soothing as it is complicated and it is definitely one of those games that you do need to play for yourself to properly decide whether or not you like it. (Although if you wanted to, you could always try watching a bunch of gameplay videos instead. The choice is yours.)

36 Fragments of Midnight may not be Ratalaika Games’ best game on Nintendo Switch, as that title belongs to League of Evil, but short content and its “faults” aside, it is actually a nice game to look at and in my mind, a pleasing game that does justify its asking price as it is something I would play again, on the days I feel like sinking into a game I don’t need to completely concentrate on.