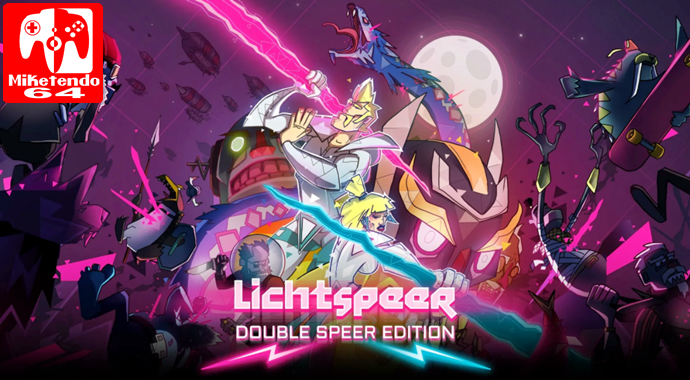 When Lichtspeer first come to PC and PlayStation 4 platforms back in 2016, it did so as a German focused creation for a single player to enjoy, but now that it’s on Switch, the fun can be shared between two unique players and it’s the latest game to go under a Miketendo64 review!

Reborn as Lichtspeer: Double Spear Edition, it is still very much so the Lichtspeer game we saw last year, which means it is still that bizarre creation that is an action, Lichtspeer-throwing arcade title that is set in an ancient Germanic future. (Yes it is an oxymoron, but just go with it.) Only now in addition to all that, co-op play is supported and while Player 2 can’t play as a Hans or a Helga (or whatever name you chose to go with for your Germonaut,) they can however play as a Dachshund capable of flight, which is oh so adorable!

For the purpose of this review I have played with and without some doggy assistance and I have to say, even with the added help, Lichtspeer can be an arduous experience, even when playing Normal Mode. As for Rage Quit Mode, well, the less that’s said about that the better, but what I will say is Rage Quit Mode does live up to its namesake very well.

Anyhow, the whole concept of Lichtspeer: Double Speer Edition, is you play as a Germonaut who can either be male, or female and you are summoned by the Lichtgod. A divine and powerful being who has grown bored, so for his own amusement, he wants you to travel various worlds inspired by Germanic myths. In doing so you will either become his Champion, or die trying, which is something you will do a lot and he will get a lot of enjoyment from.

Still, just because the Lichtgod is a bit of a jerk, he’s not all that bad since he does give you the “Fantastisch, Intergalatic, Uber Powerful Lichtspeer,” so at least that’s something. Oh and just for the record, the game doesn’t feature typos, as the English and grammar is very good, but being the Germanic game that it is, it also has some not so English words, but they are intention. (Had to point that out purely because some gamers can be very, very critical when it comes to the correct spelling and pronunciation of game text and dialogue.)

Armed with the Lichtspeer, it’s time to play through the level, which is done via a series of waves that sees your character being often positioned on one side of the screen, with the enemies coming at you from the other side and they are straight up some of the weirdest foes you will ever battle. I’m talking red fish that will devour your whole head. I’m talking Penguin Vikings, flying cats that can be a bit of a bugger to kill at times and even Frost/Ice Giants that can wear sunglasses. They like to think they look with them on, but I just see them as being as good a spot as any to aim my Lichtspeer at.

There is however more to the actual gameplay than just that, as holding A/ZR to charge your Lichtspeer is merely the beginning, as in addition to your standard Lichtspeer attack, there are skills that can also be utilised to give you a better fighting chance. Only with the exception of the first one that is given to you right at the beginning of the game, the rest need to be purchased via LSD (Licht Standard Demonisation) and they’re not cheap.

So with the Uber powers being as pricey as they are, you will need to do whatever you can to earn as much as you can, which means playing the game and trying to get as many headshots as possible. (Yes, Lichtspeer is a game where you can headshot hordes of Wurst Zombies by lobbing a well-aimed spear at them.) Should your aim hold true and you kill plenty of them, as fast as you can, you’ll points will accumulate even faster, but if you’re prone to missing, be prepared to have to play a little bit longer.

Only if you must miss, do your utmost beast to try and avoid a gory death, with levels consisting of various stages, it only takes one to reach you and rip you apart, causing you to start over from the last checkpoint and while that isn’t the worst thing in the world, it most certainly is when you’re on a certain level that specifically states you can only die a select number of times before you’ll fail an optional objective. (Optional objective in the sense that the objectives don’t need to be completed to beat the level, but adhering to them will earn you more points, a better high score and more LSD to spend.)

And just in case you think the Wizards and flying cats aren’t the worst foes you’ll encounter, there’s also bosses that can be a real nightmare, so if you can have a friend join you, than that is exactly what you must do as it can make all the difference. (Why spend an hour doing a level by yourself, if two of you can do it in 15 minutes?) And even if the game does prove a little too easy for you and you can beat every level what with being the master player that you are/Lichtgod Champion, there is a New Game+ for you to venture through, so even when you think you’re done, you’re still just getting started! The neon pink Lichtspeer throwing fun never ends, it just repeats!

Regardless of how much skill you have, or how responsive your fingers are, the fact of the matter is, you will die and you will die a lot. There will also be stuff that you will see that your logical mind can’t comprehend, but that’s okay, because both these things are to be expected and neither of them are a deal-breaker! But although the game does work as a single player experience, despite all that it has going for it, to properly enjoy the game and keep it relevant as a game you’ll keep coming back to, it would be in your best interests to try and keep Lichtspeer as a co-op only experience for your first playthrough.