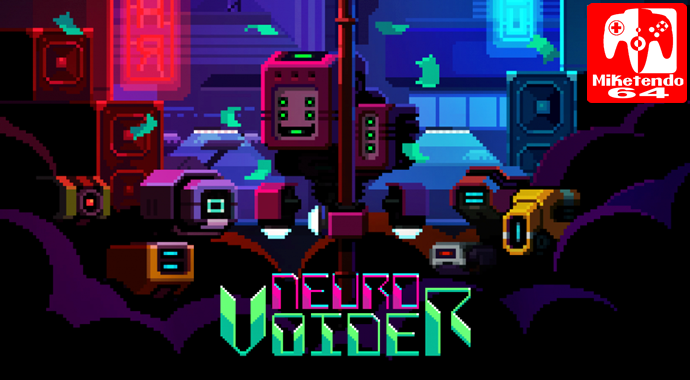 Own a Nintendo Switch and need some Grade A twin-stick shooter action? If you’re answer is yes, than be prepared to visit the eShop because NeuroVoider is here and it is a game that will keep you up all night!

From its dark synth soundtrack composed by Dan Terminus, to the fast paced action and 8736 unique enemies due to various customisations, NeuroVoider is quite literally a game that you’ll only need to play for 10 minutes to fall in love with it, or release it is not the game for you and while such a thing is a possibility, NeuroVoider is very hard not to love.

It isn’t just good, it’s great, and the fact that it’s got responsive controls, engaging gameplay and the fun can be shared thanks to the fact that up to four players to play through the main campaign together, just makes it all the more better. Although there is one other thing that really helps NeuroVoider’s case and that is how easy the controls are to learn. The left stick is used to move, the right stick is used to aim, with ZL and ZR being used to fire your right and left-hand weaponry, which can go from being a simple blaster, to an explosive melee weapon.

Only just because the controls are easy to play, it doesn’t mean the game is. Being part of the rogue-lite genre, aka roguelike, NeuroVoider is a game where when playing through either the Daily Mode or the main campaign, in the event of your death, it is game over and time to say goodbye to some of the awesome loot you were able to find.  Still, just because it is a hard game that is no reason to give this game a miss. Being a top-down retro looking creation, set in a grim future where civilisation pretty much consists of brains driving round in robotic suits, killing each other, even NeuroVoider’s premise is cool enough to make it worth checking out, and should you make it to the end by beating all 20 levels, which includes four boss battles against giant mechanised beasts who will make you cry and rage quite at least twice, the ending is worth it. (Kind of.)

It may not justify the sweat and the tears, but the ending does justify the blood at least, but even if you and your friends never reach the end and defeat the Master NeuroVoider Boss, you will all still enjoy the time you spend trying to reach it. But should you need a little more than that, don’t forget that although there are only three playable classes of robots (Dash, Rampage and Fortress,) that inbetween missions, players are free to customise their robots of death, via the loot they’ve gathered from the levels you’ve beaten and upgrade the weapons you’ve chosen to arm yourself with.

Only upgrading weaponry requires currency, and since cash is a little harder to come by and can also be used to restore HP before starting the next level, always make sure you take the time to check out the weaker items you’ve collected and scrap them. If you’re not going to use them, then you don’t need them and if you don’t need them, at least you can get some cash for them, which will help in the long run.

The best thing though about the main campaign and Daily Run, which is a “unique game” in itself, due to NeuroVoider taking full advantage of randomly generated levels, is the fact that inbetween levels, players can in fact choose which level they want to do out of the 3 they are presented with. If you feel like doing a level that will challenge your skills, pick the one that has a lot of Elite enemies. Want to earn more loot than ever before? Then pick the level with the most loot available and if you want a small level to play, so that you can beat it in no time at all, by locating and blowing up the required number of reactors, than a small level is what you pick. For the true challenge though, always pick the Metaverse level option, as surviving that can earn you a Skip Token, which can be used to skip any level except a boss one.

Should you find yourself with some great loot and then die, the good news is, it can be collected once again, with the same name and stats, only you will need to defeat your Nemesis, a Super Elite class robot to reclaim it, on the level in which you died on during your previous playthrough. Now I know while it is tempting to hunt down that dastardly foe on say the Graveyard theme level, they are powerful and your weapons do have limitations due to the fact that while you don’t need ammo, you do have EP and when it runs out, you’ll overheat, which leaves you wide open to attack. So if you do go after your Nemesis, be sure to bring a plan with you, as it would suck to die by the same enemy once again and lose your latest loot. But hey, this is all part of NeuroVoider’s charm and I wouldn’t have it any other way!

Running at 60 FPS, NeuroVoider isn’t just a pixel game that looks good, it plays good too and while it is true you can pretty much see almost everything within one hour of playing it, NeuroVoider with its fantastic music, is an insanely addictive shooter that demands to be played and there really isn’t a platform better to play it on, than the Nintendo Switch, so what are you waiting for?