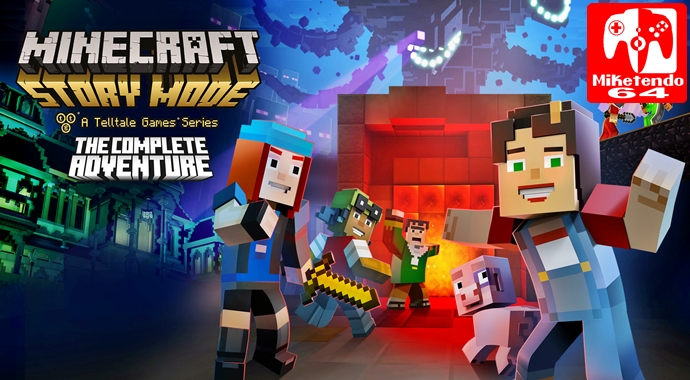 In all my years of gaming, there have been series’ that I feel in love with instantly, games I couldn’t get enough of and some games I just couldn’t get it and Minecraft is certainly the later. Even when I played the Switch version, although I could appreciate what it is, it’s just not my bag, but I wasn’t going to let that stop me from giving the Minecraft games a chance to wow me over, so for the purpose of this review, I went hands on with Minecraft: Story Mode and you know what? I actually really enjoyed it.

Made with the Telltale Tool engine, to anyone unaware of Minecraft: Story Mode – The Complete Adventure, it is still very much so a Minecraft game, but it’s pretty much a Mario + Rabbids Kingdom Battle kind of Minecraft game in the sense that the game’s original developer was involved with Story Mode to a certain degree, but for all intents and purposes, it’s a third party made Minecraft title. Only instead of Ubisoft being the developer, it’s Telltale Games, the very same Telltale Games who were behind The Walking Dead: Michonne, Batman: The Telltale Series and even Game of Thrones.

Telltale aren’t just respectful to established franchises, but they’re really good at taking known series’ and making something fun out of them, which is exactly what Minecraft: Story Mode is. Okay sure it comes across as being an interactive film for kids, at times, but just like any children’s film, there is still plenty of references and jokes that older, mature and adult players to enjoy and delight in. and if you have yet to try out the game on any of the various other platforms the game is already available on, now is the perfect time to do so!

And you know what else now is the perfect time for? It’s perfect for properly relaying what the game is and isn’t to those reading and where better to start than with the game’s title? Named Minecraft: Story Mode – The Complete Adventure, the game is pretty much what it says on the games box art. It’s a Minecraft game with a story and as for the “The Complete Adventure” bit that applies to the fact that both the physical and digital Switch version of the game, comes with the entirety of Season 1, which is made up of 5 main game Episodes and 3 bonus Episodes that was added as downloadable content, which was first seen in 2016. (There is also a Season 2 of Minecraft: Story Mode, but the Switch game doesn’t have that.)

Now although Minecraft: Story Mode is in fact sold and marketed as a video game and is described by Wikipedia as being “an episodic point-and-click graphic adventure,” it is not a video game, not really. In the 10 hours it took me to play through the whole game in it’s entirely, only 2, 2 and a half hours of that time was spent actually playing, but even then the majority of gameplay consisted of moving Jesse around an area to solve a puzzle and interact with those around him, with the occasional battle every now and then, before lengthy animated cut-scenes would play out.

Still, just because the game may lack somewhat in terms of playable action, it makes up for it in a number of ways. For starters, where it may suck as a video game, it excels as an interactive movie that has decent from the actors who lent their voices to this project, witty humour that can be both light and dark at times, and a wide array of characters that will wow you over at some point during the experience. (Some you may hate outright the entire time, but there is one character you won’t hate and that is Rueben the Pig. Rueben is awesome and there is nothing he won’t do to make Jesse, his owner/your playable character, happy!)

Rueben is without a doubt the best character in the game, which is saying something as the main character Jesse (who can be male or female depending on what you choose,) goes from being a mere wimp of a protagonist, to someone who never backs down, no matter how perilous the dangers he faces are. (Seriously, he actually gets really cool as the game goes on.) The absolute best thing about Minecraft: Story Mode though, is the fact that because it is interactive, it truly is a game where you the player, can shape your own adventure, thanks to the choices you make and the things you say. Much like with the Mass Effect games, when someone is talking to you, there are always four choices for you to choose from. You have your renegade option, your paragon option, your somewhere in between option, or you can just say nothing at all.

During the first hour of the game, I tried to be a nice guy and say nice things whenever possible, but then something happened and I didn’t want to be that guy anymore. A butcher snatched my Rueben and tried to cut him up and sell him to the public and I wasn’t going to let that happen, so when push came to shove, instead of making a deal with him, I threatened him with a sword. I then started punching people, saying horrible things to others and to be honest with you, it was kind of fun. Yeah being a meanie is no way to make friends, but god damn it, who has time to make friends when the world is ending?

Oh yeah, I forgot to mention that. Sure I mentioned dangers before, but the world is on the edge of total destruction as a certain Wither Storm threatens to destroy everything in its path and while there is a group of Heroes called The Order of the Stone who could save the day and in fairness they do, but not without the help from a bunch of new heroes, who don’t even want to be heroes. So I as Jesse, I didn’t have that much time for niceties, so while I was pleasant when I needed to be, if for one moment I felt someone was out of line, I’d let them know about it and I would never side with any of my companions I caught arguing. So instead, I would end the conversation every single time.

The truly delightful thing about this interactive form of play though, is that when going through a second playthrough (only halfway through at this time,) I have chosen to be a nice guy and do things differently and it is interesting to see how the game can differ. A lot of hard work, cool funky quick-time events and effort went into making Minecraft: Story Mode – The Complete Adventure a great game and it does show ever single minute you experience it. Even better than that fact though, is even if you don’t like making/crafting things, which is why you refused to play the main Minecraft game, than not to worry as there really isn’t that much to do in this game, as a lot of the time, when making things, you just have to mash B, as crafting tables are very, very rarely used!

What’s missing from the game though, is the freedom that comes with Minecraft, as there is virtually none in Minecraft: Story Mode and although it isn’t necessary to have an extensive knowledge on the former, just know that during the adventure you will go to places such as the Nether and the End, and encounter beings such as the Enderman and Creepers, which are actually something of a big deal and although the game does do a decent job of trying to explain their importance, there is plenty it doesn’t say, still that’s not a game ruining feature. What might be a game ruining feature is the fact that for some of the quick-time events, no matter how fast you act with the controls, they always seem to feel a tad sluggish, but then it and a few of the other minor issues the game has, are nothing a minor patch couldn’t fix, and in no way truly impact upon the quality of what is yet another fantastic Telltale Games game!

Unlike the game it shares a setting with, Minecraft: Story Mode is a Minecraft title that anyone can pick up, play and fall in love with. It might not be an open world sandbox game like the actual Minecraft, but it is a game that even non-Minecraft loving players can happily sink its teeth into, thanks to the story the talented Telltale Games team were able to craft for it and the characters the voice actors did a great job of breathing life into. Just make sure that if you do choose to buy this game and give it a chance and then play the actual Minecraft afterwards, there is no guarantee you will like the original title, but at the very least, you will be accustomed to its graphics and some of its basics. But if Minecraft: Story Mode – The Complete Adventure is not the game for you, you could always try LEGO Worlds when it releases this September.