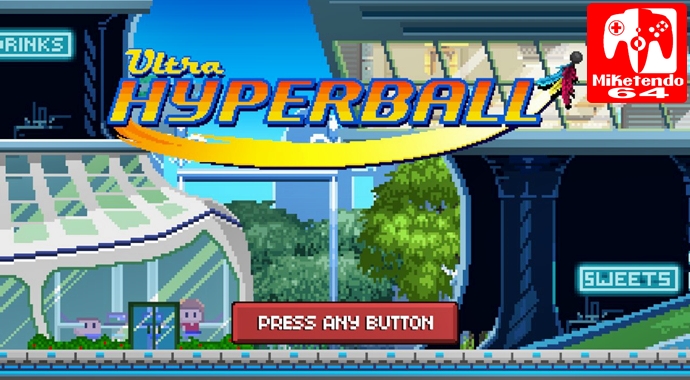 With games of every genre and calibre crawling out of the woodwork and making its way to Nintendo Switch, it comes as no surprise to see the likes of Ultra Hyperball show its face, but although it is a sports game of sorts, which is a Nintendo Switch exclusive, it is not the sports game some gamers were expecting.

Yes the game does revolve around a sport called Hyperball, but instead of running round a big open field, kicking/throwing/batting/passing a ball, you’re hitting it with the sole might of your helmet covered head. I hate to be blunt like that, but the sport is not really a sport at all, it’s just doing keepie uppies until you balls up. But just because the “sport” aspect fails there, it doesn’t mean you should write Ultra Hyperball off just yet, as where it really excels is how it handles as a party game.

While a single player campaign is supported, ultimately Ultra Hyperball is in fact a party game ad genuinely plays better when playing with others and while it may lack having various sports for players to try out, what it others instead is various ways to play the singular Hyperball sport. For example, while the earlier stages of the game can easily be played by pressing a single button to jump just at the right time to get a “Perfect” and send the ball soaring upwards even higher, there are other modes that require you to play Ultra Hyperball in Handheld mode as you will need to physically tap the screen where the arrows are to make the playable character jump and there’s even another mode where you have to tilt the control to make the player run from one side to the other!

With regards to the 5 various ways to play, while they are a good idea and work exactly as they should, some means of play will take a lot more time getting used to than others. Because of that aspect, this is where Ultra Hyperball is going to be a game players will either continue to play, or move away from, as not everyone who buys it, will dedicate themselves to mastering the controls, but for those of you who do invest the time then get ready for the full embrace of everything this chiptune soundtrack, pixelated party has to offer!

Ultra Hyperball has a range of levels and lots of awards to earn in the form of unlockable stages, and 45 new playable characters that range from the normal to the outright bizarre, on top of the four that available right from the beginning. There are also a trio of trophies that can be earned from the various levels and while anyone can get the Bronze Trophy on every stage, but getting the Gold Trophy is where all the real action is at, but that will only happen if you can master all the various playstyles, which is something I’m still having to perfect.

Getting the absolute hang of the tilt controls still elude me, but I am getting better, slowly but surely, especially since the left shoulder button can be used to recalibrate Joy-Con Controllers, although you can do the whole tilt action with Pro Controllers if you’d rather, but if anything, they’re worse as even the smallest of tilts can have your selected player rushing straight to the other end of the level. Although I do prefer it more so than I prefer the touchscreen mode, because tilting a Joy-Con is a lot easier than trying to control three players and making them all hit a ball at the right time!

Still, if you need a reason to stand by Ultra Hyperball, other than colleting everything it has to offer, and the 40 levels it has in total (25 of which are single player,) there is a quirky story to it as well. The story of a 17 year old who is just too old to be a professional Hyperball player, but tired of working in his parent’s noodle restaurant, he’s desperate to make his Hyperball hobby a reality.

Now the progression of the story is actually pretty good, but it is very monologue heavy, so if you’re not a fan of “excessive reading” when it comes to the video games, the whole reading thing can prove to be a small annoyance, but the text is crisp, clear and the game does actually have a pretty nice feel to its whole package and yes, Ultra Hyperball does feel like a complete game that requires nothing else added to it, so a few of the complaints that have stated otherwise, are in fact wrong.

However, if you have reached this point of the review and have yet to read anything about the game that you do like, I shall take one more crack at trying to sell you on the party aspect of it because even if you can’t play the games harder modes because you just can’t get on with the tilting and running, you can always just play a simple battle with a friend that will keep on going until one of you wins 5 rounds, only to then realise a couple of hours have passed as the two or more of you played more than just the game. But it is definitely a game to bring out when there are plenty of others in the room to join in, even if it’s just to laugh and awe at the various different playable characters.

By no means is Ultra Hyperball a perfect game, but as stated before, when played with friends, it is an enjoyable experience that will stick in one’s memory a little longer than a few other games currently available from the Switch eShop thanks to its simplistic arcade style, easy on the eye pixel graphics and captivating chiptune tunage.