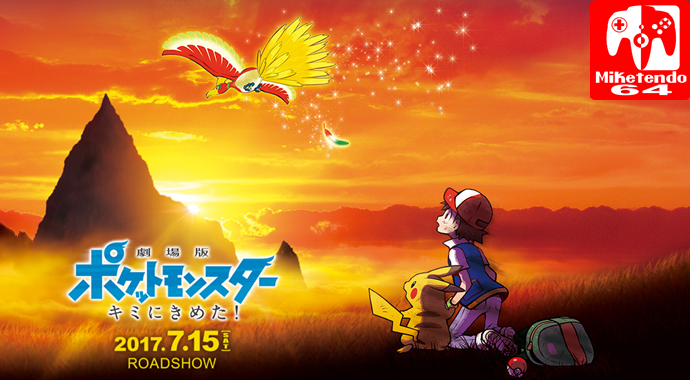 [Press Release] Pokémon the Movie: I Choose You will Have a 2 Day Global Screening this November

The Pokémon Company International and Fathom Events Bring Pokémon the Movie: I Choose You! to Theaters for a Two-Day Cinema Event:

Bellevue, WA, and Denver — July 31, 2017 — The new animated film Pokémon the Movie: I Choose You!, based on the globally popular Pokémon brand, is coming to movie theaters around the world for two days this November. The Pokémon Company International announced today that it has entered into an agreement with Fathom Events, the recognized leader in event cinema distribution, for international theatrical rights to the highly anticipated movie outside of Asia.

Pokémon the Movie: I Choose You! is an origin story highlighting Ash and Pikachu’s first meeting and their adventures as they search for the Legendary Pokémon Ho-Oh. The iconic pair encounter familiar faces along the way, new characters including Trainers Verity and Sorrel, and even a mysterious new Mythical Pokémon, Marshadow. Challenges and epic Pokémon battles abound in this unique new story about the beginning of one of the most beloved friendships in popular culture.

“As an origin story, Pokémon the Movie: I Choose You! is the perfect way for a new generation of Pokémon fans to experience the beginning of Ash and Pikachu’s friendship, and it offers longtime fans an exciting new look into the start of their epic adventures,” said Colin Palmer, vice president of marketing at The Pokémon Company International. “We’re excited to work with Fathom Events, whose expertise in unique theatrical event activations will offer families and fans the opportunity to come together and experience the excitement of Pokémon animation on the big screen.”

Pokémon the Movie: I Choose You! will be shown in movie theaters for two days only, on Sunday, November 5, and Monday, November 6, 2017, in select international markets. More details, including screening times and special offers, will be available soon. The movie is already winning over crowds of moviegoers in Japan, where the franchise began, as it opened at the top of the charts for its first weekend.

“Fathom Events is thrilled to work with The Pokémon Company International to bring Pokémon the Movie: I Choose You! to the US and international event cinema markets,” Fathom Events CEO-elect Ray Nutt said. “We can’t wait to deliver a high-caliber Pokémon cinema event that fans around the world won’t want to miss.”

More information, including participating theater locations, ticketing dates, and event details, will be available soon on www.FathomEvents.com. Parents and fans can visit the site now to sign up and receive updates and details about the upcoming limited theatrical release.