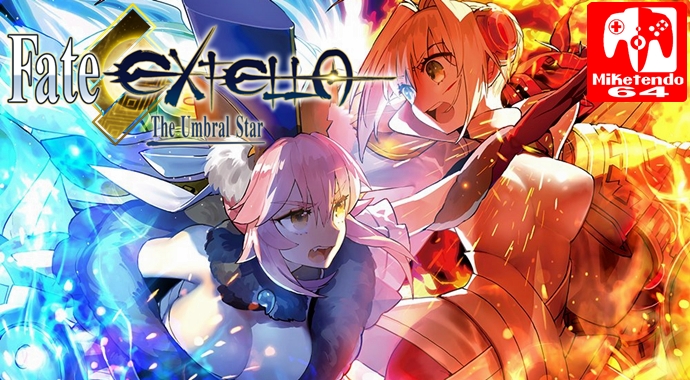 We may be a few months away from the release of Fire Emblem Warriors, but if you’re in the mode to play a hack and slash styled video game this month, such an option is available and that “option’s” name is “Fate/EXTELLA: The Umbral Star!”

Having never played a single Fate game before, I went into Fate/EXTELLA with open eyes and now after hours and hours of gameplay, they are more open than ever. Fate/EXTELLA was not the game I expected it to be and while it does have its flaws, it is still a great game nonetheless, but I happen to have a penchant for video games of the hack and slash calibre, so maybe I’m being a tad bit biased.

Nevertheless though, this is a review so let’s put bias to one side and give Fate/EXTELLA: The Umbral Star the proper treatment it deserves. So with Fate/EXTELLA being a hack and slash type game, a lot of repetitive gameplay can be expected, as can a story you will either get it in the sense you understand it and like it, or don’t like it and don’t quite care about it. Or you can be a really bizarre case and not understand the story, but like it anyway, but regardless of how you will feel about it, Fate/EXTELLA is probably a game that can be easily described as a game that is Hyrule Warriors combat meets Matrix 2 and 3 storytelling, but if you require more, more you shall get:

The story of Fate/EXTELLA takes place on the Moon, where essentially a giant super computer resides and the likes of famous Heroes from humanity’s history are reborn with a digital body and can live once more during the time of the Holy Grail War. (The very same Holy Grail War that was seen in Fate/EXTRA.) Only in Fate/EXTELLA, the Holy Grail War is over as Saber class Servant Nero Claudius, and her Master (true name Hakuno Kishinami,) has won, only things soon get worse.

Whilst in the Moon Core, the Master (the protagonist of him the player can personalise by choosing their gender and giving a name of their own choosing,) is attacked by a giant beast that is reminiscent of one that nearly destroyed all of humanity 14,000 years ago. Once recovering, the Master is met by his/her devoted Servant, of whom you are entered in a contract with. One who fought by your side in the war, whom is now the proud wearer of the Regalia that symbolises her as the true Sovereign of SE.RA.PH. Only it turns out she’s not the only one as there is another, who rules a faction you must battle against, only to then meet a more formidable foe, as you then strive to defeat a monstrous calamity.  (Also all dialogue is spoken in Japanese!)

Only it turns out there is a lot more to it than just that, as the game’s main story, doesn’t just have a single story to tell through one perspective, but through three, but you will need to play through the first story, to unlock the second telling of it and then the third. Now the first two aren’t that bad. I enjoyed the story from the “Red Saber’s” and “Blue Caster’s” perspective, Altera’s story is more out there and much more story-heavy. In the beginning of playing through it, it was good as it really dived into the lore of what Fate/EXTELLA is trying to sell, but it is so dialogue heavy that it becomes a little too much at times.

Still, regardless of the overly complicated story that could have been better, it’s not just limited to the Main Story, as there is also Side Story’s to experience as well, which shows the game’s story through the eyes of those following the leaders of each warring faction and you can expect to spend a lot of time completing the available Side Story campaigns as there are 13 playable Servants to play as and they’re not just limited to being characters who only appear in Fate/EXTELLA, but other Fate games as well. Also for anyone worried about the multitude of Servants not having their own fighting style, they do and there is even a new Form Change mode included that allows them to change their form, power up and do some real damage.

As for how the actual combat goes, it’s pretty much what you can expect from a hack and slash game. There combos that can be administered and quite a few of them, but you’ll never really have to learn them as you can easily just mash whatever works for you over and over until you have taken out enough enemy attack programs to make Aggressors appear, which then need to be taken out of the equation so that you can take over the keep. Then you have to take over another keep and another to get all the Regime Keys that are required for you to complete the Regime Matrix before the other faction can. There are also side missions that can also be accomplished during each stage that allows you to strengthen the bond you have with various characters. (You can also strengthen your bond with the likes of Nero by choosing the right dialogue option when in My Room, which is quite literally a lobby for you to reside and rest in when not battling in the Main Story.)

Then there’s the whole Code Cast aspect of the game, which is spells the Master can use when their devoted servant is in battle and there are a lot of them to be unlocked, disabled and crafted. There are also Install Skills that are skills you can randomly get from Aggressors and Servants you have bonded with that can be used to earn EXP much faster to level up your digital combatants and collecting more of the same will in fact make them better! There’s also a special attack known as the Extella Maneuver, which is the perfect way of dealing massive damage to multiple enemies, as it will allow you to deal a flurry of blows that will really help rack up your combo metre, which is an absolute must if you wish to score an EX rating on every level you play in every mode!

However, as complex/simple Fate/EXTELLA can be, it’s also a very pervy game as you can take hot baths with certain female characters, put them in revealing dresses and have them continually coming on to you and not so subtly making comments that are just flat-out wrong. There is also a very gigantic dark skinned woman, whom at some point during the third telling of the main story, you can climb all over to “investigate” her and slide down washboard stomach, skyrocketing towards her downward lady parts, only to be stopped because she caught you. Also you can make the giant dress up as a Nurse as part of a Special My Room event, whilst another character will wear a school girl’s outfit. Yup, it’s that kind of a game!)

Fate/EXTELLA is not a game that will change the world, but it looks gorgeous, plays smoothly on Switch on and off the TV. There’s plenty of tracks to listen to and you know, the Switch version does come with all the DLC that was added to Fate/EXTELLA post-release, so as for as costumes go, (including the new Unshackled Bride outfit,) there are a lot of them and with so many characters to dressed in a manner of your choosing, it’s easier to list the kind of costumes that aren’t available! So while Fate/EXTELLA is a deliciously expensive game, at least it is an expensive game that is also available in physical form and well worth the asking price, what with all the content it has to offer!

If you are looking for a game that is just flat out weird, perverted and promises lots of action, than Fate/EXTELLA: The Umbral Star is the game you are looking for. Yes it could have been better, or even just made more sense, but God dammit it’s got under my skin and I severely enjoy it way more than I believed I would. It’s also really on the Switch and addictive, so I’m just going to come out and declare it an 8/10. Fate/EXTELLA is one of those games that won’t necessarily appeal to everyone and would have been better off supporting a co-op mode, even if it was just for the Switch, but it is most certainly a game that has to be tried once and I for one am glad I did!