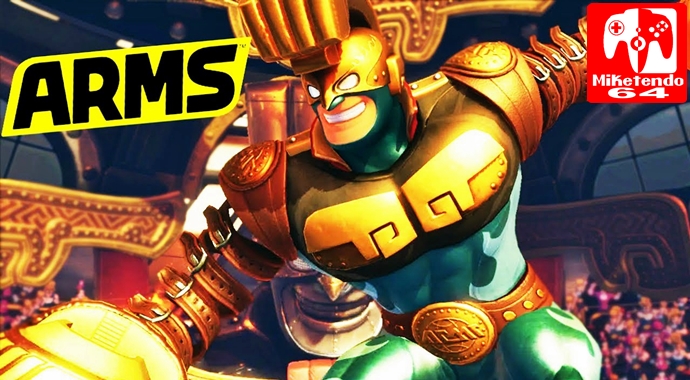 Following the reveal of Max Brass coming to ARMS on July 12th we’ve now got some new ARMS news for you!

When the update rolls out, it does so with Max Brass’ 3 favourite ARMS (Nade, Roaster and Kablammer) and a new stage by the name of Sky Arena, as for a couple more details on the weapons and stage, here they are:

As for a couple more details about The Commish, we have those too:

Anyone who’s made it through the ARMS Grand Prix will know that this is the one and only Max Brass, head honcho of the ARMS League and reigning champ! When Max Brass charges up, he can pump up his beefy body to maximum buffness – so much so that he barely feels punches!

That’s not all! When he’s health drops below a certain point, Max’s punches will stay charged up. Hang on a second, doesn’t that sound just like Spring Man?

And if you love everything you’ve heard so far, don’t forget there is plenty more to come as even more fighters and stages will make their way to the game as even more free additional content. But until news of the next fighter comes, do be sure to roll out the red carpet next week when the champ comes knocking!