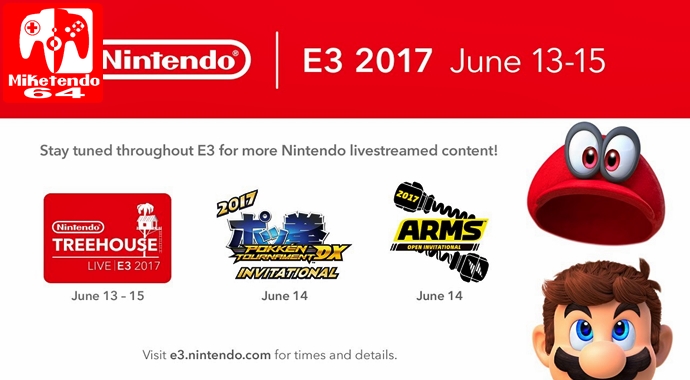 Just like with Day 1, Day 2 of Nintendo’s antics are other and for anyone who would like to know what went on, the following recap press release can help:

In the 2017 Pokkén Tournament DX Invitational, four teams battled it out in a crew battle, with the winning team of YouTube star MatPat and pro-gaming player Allister Singh each taking home a framed Pokkén Tournament DX art piece signed by Tsunekazu Ishihara, president and CEO of The Pokémon Company, and developers from BANDAI NAMCO Entertainment Inc.

Later, during the 2017 ARMS Open Invitational, four expert gamers competed in a single-elimination tournament against four E3 attendees. The winner Jamal “Zerk” Mackey, an E3 attendee that qualified for the tournament in the Nintendo booth today, received the coveted 2017 ARMS Open Invitational Belt. He also got the chance to face-off against the Kosuke Yabuki, the producer of ARMS, in an exhibition match.

Throughout the day, Nintendo Treehouse: Live at E3 showcased games for both the Nintendo Switch and Nintendo 3DS family of systems. Treehouse members and developers made a number of exclusive revelations,including:

Sushi Striker: The Way of Sushido: Nintendo announced the development of what promises to be the most exciting conveyor belt sushi puzzle action video game in history! In the Sushi Striker: The Way of Sushido game for Nintendo 3DS, players match colored plates and types of sushi to hurl tall stacks of plates at their opponent. The more matches players make, the taller their plate stack and the stronger their attacks will be. The game is scheduled to launch in 2018.

And now we can get back to the good stuff!