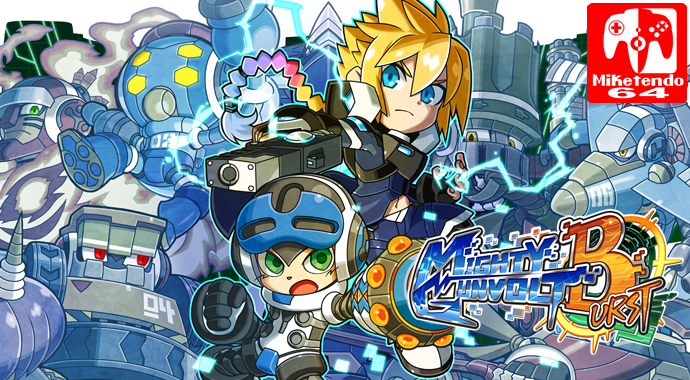 Mighty Gunvolt may not have been to everyone’s liking, but the game has become a series and while the 3DS version isn’t out until next month, at the time of the posting of this review, the Switch version sure is and you know what? It’s a total blast! But this is a review and while it would be so nice and easy to leave it at that, let’s get this whole thing underway shall we?

For the uninitiated, Mighty Gunvolt Burst is not a “direct sequel” to the “bite-sized 2D action game Mighty Gunvolt” that saw release on 3DS and various other platforms back in 2014, as it is described as being a “brand new full-sized game,” which of course features Gunvolt (protagonist of the Azure Striker Gunvolt games) and Beck of Mighty No.9 fame, hence the Mighty Gunvolt title.

Only don’t expect this instalment to be anything like the previous one, because although it features a similar premise, the music is better, the pixel graphics have been improved so as to “blur the line between 8-bit and 16-bit and take you back to the golden age of 2D action games!” and the game itself is just downright different.

With a more engaging story, which plays out differently depending on which character you choose to play as (Gunvolt or Beck,) and gameplay that is so improved that players can truly make each play-through of Mighty Gunvolt Burst a unique experiences thanks to all the character customisations that are available, Burst does in fact prove to be the sequel Mighty Gunvolt deserves, but just in case you’re the kind of player who needs to know more about the main protagonists before you can be sold on a game, than try these two images on size, as they are so informative, they even detail Gunvolt’s special Skills and Beck’s various Attack styles as he can fire bullets of all kinds:

I can see the appeal of Beck’s character, especially since his move-set and customisations are fresh and interesting, but I found it a lot easier and enjoyable to play as Gunvolt instead. Plus you know, he’s Gunvolt and Gunvolt is one striking character! Then there’s the fact that when first starting the game, each character has their own story and having read through both, Gunvolt’s just appeals to me more. But make no mistake, while the stories may differ, the virtual world they find themselves in is not. They each go through the same set of 9 stages, with the same boss waiting for them, but whereas Beck is the ultimate villain in Gunvolt’s story, Gunvolt is the villain in Beck’s and because I’ve kept you waiting long enough, here’s a couple of photos of each character’s own little story:

And now that’s out of the way, can go further on down the rabbit hole and talk about what really makes this game so good, starting with the title? What is the Burst in Mighty Gunvolt Burst for? Well a Burst, is actually something you can do whislt playing. Something that can only happens when playing and you get up close and personal with an enemy when you kill them, resulting in a “magnificent explosion.” Yes you can take shots at them from a distance, but it’s just not the same when you’re in their face and you do it. Plus when you Burst an enemy you can score more points and you can chain Bursts by killing another enemy up close and rack up the points even more so. The Burst Combo does not revert back to zero as time passes, but if you fail to Burst an enemy then it will. Also Bosses can be Burst killed as well and it is one of the games challenges. Oh and speaking of challenges, that’s what we’re moving onto next.

While there may not be too much in the way of Stages as the game is capable of being beaten in under an hour (single playthough), it certainly has plenty of replay value, which is in part thanks to the number of challenges the game has (30.) Only don’t go expecting them to be a doodle to do as some are tricky and others (8) are secret, but they give rewards, so they are worth doing, even though the rewards are Pixel Stickers. What’s that Pixel Stickers? Yes there are Pixel Stickers and while they don’t particularly do much other than look good when viewing the Collection screen and using them as icons for your Custom shots, there are plenty of them and they can be obtained numerous of ways. For starters, beating challenges (who would have guess that?) Randomly getting them from bad guys you just killed or by replaying stages over and over again.

No, don’t roll your eyes. If you wish to collect all Rare Items each stage possesses, you will need to keep replaying the levels until you have them all as one can only be earned at a time, plus some of those Rare Items are CP upgrades and trust me, you want the CP upgrades. (Although you could just pick them from the outset as you can do that when you complete the stages for the first time and then replay for the others.) As for the treasures you are able to get, they are hidden away in secret locations that you often have to blast your way into, but don’t worry. Both Mighty Gunvolt protagonists can obtain a Dowsing module that is hidden on the first stage and allows you to sniff out these hidden locations via the means of the Nintendo Switch’s HD Rumble feature, which vibrates even more so the closer you get to the hidden treasure.

But that’s enough about that, it is time to talk CP! “What’s CP?” I hear you ask? Well CP stands for Cost Points and these are what makes the game really interesting. Why? Well these are what are used to turn what are already bad arse characters into even bigger bad arses. How? Well the points are used to adapt your desired loadout, so if you wish to deal more damage with your shots, have a bigger field of fire, reflective rounds and have a ton of useful abilities to hand, you’re going to need a whole lot of CP. But in case it wasn’t obvious as the previous paragraph pretty much covered this fact already, CP upgrades are easy enough to earn/find. Also they can be used to decrease the damage you receive, so there’s that also.

As for the levels themselves, while some are short in initial appearance, some can take you forever if you don’t know what you are doing and feature all kinds of great gimmicks and mechanics that players will love and don’t worry, dying is not the end of the world. In fact there is no game over at all, so when you do perish, you respawn at your previous checkpoint and can resume from there. There is also no limit on how many times you die, but just know when you do eventually finish the stage and you’re performance is being evaluated, you will be penalised 300 points for every death you had, which will cost you getting the all-important S Rank.

One way to avoid dying though is to eat food whilst playing as that is a good way of recovering life, which is easily done provided you remember to pause the game and eat said food. Something else you can do whilst in pause menu is choose to give up, restart the level or respawn at the last checkpoint, but the giving up option isn’t a bad thing. Sure it takes you back to the stage select screen, but anything you find on the level such as treasures, can be kept. Plus some of those bosses can be pretty insane, so quitting can sometimes be your only option, depending on your skills and if you would like to know more about the bosses and their associated stages, then try these images on for size:

Is it better than Mighty Gunvolt? Damn right it is. Sure you can argue it doesn’t have enough content and that it’s not necessarily better than Inti Creates other Nintendo Switch offering, (Blaster Master Zero), but honestly, why compare the two? The fact on the matter is both are great titles regardless of whatever platform you play them on and Mighty Gunvolt Burst does tick a lot of the boxes that Mighty Gunvolt couldn’t. So without putting it off any longer, I’m giving Mighty Gunvolt Burst an 8/10 for it really is another great Inti Creates game on the Nintendo Switch and well worth the asking price!