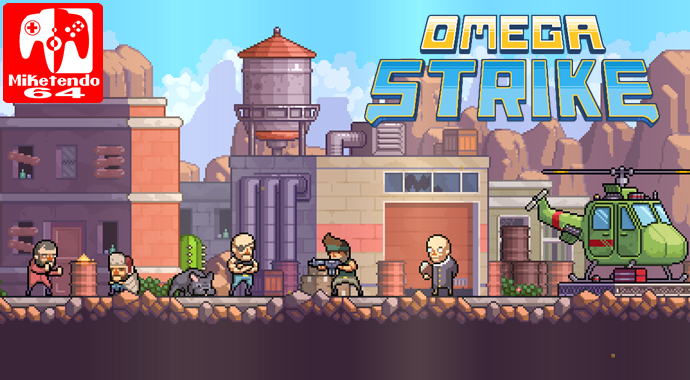 As part of a particular feature exclusive to Miketendo64, we are hosting an Indie Dev Spotlight segment, which sees see us inviting indie game developers to talk about their game on our website, in a bid of getting more attention for their creations. So to kick off this latest instalment, here’s Woblyware talking about Omega Strike:

First and foremost, tell us a bit about Woblyware?

“Woblyware is a one man indie game studio dedicated to creating hand crafted games with a retro touch. Woblyware was founded in 2009 and since then I’ve created several popular flash and mobile games including League of Evil, Random Heroes and Devious Dungeon.”

What is Omega Strike?

“Omega Strike is a 2d metroidvania game with multiple playable characters. Players can swap heroes on the fly to take advantage of each heroes unique abilities to overcome the deadly traps and enemies that roam the world of Omega Strike. There’s a total of 12 bosses and over 40 different types of enemies spread around the seven unique areas in Omega Strike. Players can also learn new abilities for each hero, find hidden treasures and purchase weapon upgrades from the local arms dealer.”

At what Stage in Development is it currently at?

“I’d say Omega Strike is about 70% done at this point. All of the games systems have been implemented and now it’s just a matter of carving out the rest of the gameplay areas. When that’s done I’ll still need to do some tweaking and maybe adding some cool little secrets to the game.”

As far as RogueCube goes, do you have any Intended/Nintendo Platforms in mind are any Confirmed?

“Omega Strike is being developed on the GameMaker Studio 2 which doesn’t support Nintendo platforms at this point. Finding a 3rd party to port it later on is always a possibility, as I’d definitely love to see the game on the Switch.”

Lastly, where does Omega Strike’s Inspiration comes From?

“The biggest inspirations for Omega Strike have been Metroid, Metal Slug and Contra games. With this game I’ve tried to create a proper metroidvania experience with a good amount of running and gunning in the mix.”

For any of our readers who would like to keep up to date on Omega Strike (hopefully for Switch,) you can do so by regularly visiting Bipolar Dawn Studios’ website as often as you would like, or by regularly checking in on them over on Twitter. Whatever you decide though, these are the links you’ll want to use:

Now should you yourself be an indie dev reading this, then we would be more than happy to extend you the same courtesy we gave Bipolar Dawn, and Woblyware by giving you guys some well needed coverage, but there are some rules. For your game to be featured on our site, we do require it to either draw inspiration from one of Nintendo’s own IP (Intellectual Property), or at the very least have a Nintendo release platform confirmed.

*While we would prefer the game to already have a Nintendo platform already confirmed, we will also offer coverage to those that have a 3DS, Switch and even a Wii U release in mind, as long as we like the concept of your game.

If you feel your game fits the bill, (and meets our rules) feel free to send an email to miketendo64@gmail.com and we will reply the second we see it in our inbox and see to it your game and you yourselves get the coverage you deserve. And just in case you’re not a dev, but one of our readers, then we hope this new series will introduce you to a game you would very much so be interested in.

However this segment does not end here just yet as a new press release for Omega Strike has also been sent out and you can check out right here:

Hello! We are Woblyware, the creators of League of Evil and other great mobile titles. Currently we’re working on a PC game called Omega Strike and we’ve just released a new trailer we’d love to show you.

What is Omega Strike?

Swap your heroes on the fly to take advantage of each characters unique abilities to overcome the deadly traps and enemies that roam the world of Omega Strike.

Even if Omega Strike doesn’t make it to Switch, don’t forget League of Evil is coming to both Nintendo 3DS and Nintendo Switch thanks to Ratalaika Games, this year. We hope you enjoyed this instalment.