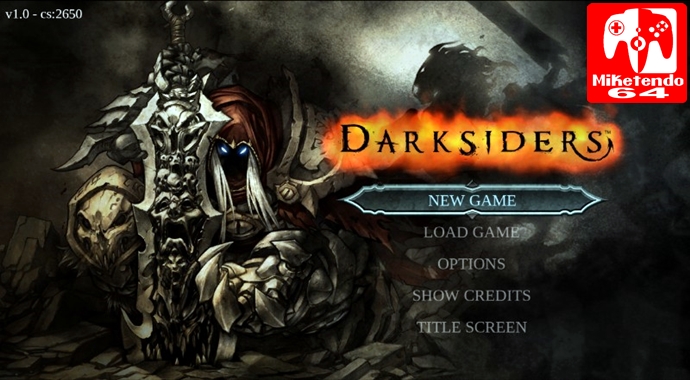 Get ready for Hell on Earth again as War is back and not only has Darksiders I has never looked so good, but it has never played this good either!

First and foremost, just in case it isn’t evident, Darksiders Warmastered Edition is nothing new as it is a game we have seen the likes of before. Except back in 2010 when it originally released, it was just a called Darksiders and was met with a lot of positive reviews and feedback. Still back when it did initially release, it never come to a Nintendo platform until this month.

Remastered, rebranded and brought to the Wii U (and a couple of other platforms late last year) Darksiders is a beautiful blend of The Legend of Zelda, meets Bayonetta, meets Devil May Cry and because it is a remastered version, before I actually talk anything game related, first we’re going to focus on how Darksiders the original differs to Warmaster Edition.

Although the title is meant to be a clever play on words as it is meant to be a remaster and the main protagonist is War (one of the Four Horsemen,) it doesn’t come across as being that much of a remaster. Yes visual improvements have been made, as texture resolutions have been doubled, the cut-scenes have been re-rendered and graphic options like FOV, anti-aliasing and texture filtering have been added. But even then, when you compare it against the remaster Darksiders II got, this game’s tweaks seem miniscule. Still it is supposed to run at 1080p and 30fps, during TV Play for the Wii U version of the game, but there a good few times the frame rate drops, so you’ve been warned.

So remaster-wise, there really hasn’t been that many changes, but they are enough to make the game feel a tad more refined and even if they didn’t, I’m sorry but who really cares? Yes some gamers really care about graphics and the like, but even if Darksiders Warmastered Edition looked worse than the original, I don’t think it would matter. It may have taken 7 years for Darksiders I to finally come to a Nintendo platform, but it is still very much so the classic it was when it released back in 2010 and if you have a Wii U and played Darksiders II, than you will love its prequel.

Sure the combat feels slower in comparison, War isn’t nearly as good looking as he’s brother Death, but this is the game that made the way for a sequel to happen. The game in which players get to experience and play through the events that are spoken about in Darksiders II and you know, it’s a game about some Horseman called to the Earth as a war between Humanity, Demons and Angels break out, and when he goes to stop it, he is stripped of his powers as he wasn’t even meant to be on Earth in the first place, as no such call was actually made. (Whoops!)

Still I wouldn’t say Darksiders is better than its sequel as the game does have some flaws in the sense that is more of a bare bones version what with having a smaller world (only requires around 20 hours to complete it) and the systems in play in terms of abilities, weapons and gear, is very simplistic in comparison, but sometimes less is more and this time around, less is actually better and no there will be no more Darksiders I and II comparisons, as now I just really want to talk about the actual game, as a gamer who enjoyed it as opposed to a critical reviewer, so here goes.

As a lover of both The Legend of Zelda and Bayonetta video game series’ naturally Darksiders Warmastered Edition is my kind of game. It’s an action-fuelled, story packed adventure that captivated my attention from the get-go and had me glued to my seat for more hours I’m willing to admit, but they were hours well spent. Okay so War doesn’t have a green hat, there’s no Princess Zelda and there certainly aren’t guns strapped to his feet, but he can still fly through the skies astride a beast, shooting both demons and angels. Plus, you know, he’s War. A freaking Horseman and yeah, he’s rather powerless after the Charred Council strip him of what made him so great in the very beginning (Chaos form rules!), but he gets a lot stronger as he learns a ton of abilities through-out the game and some of the better ones can be claimed within the first 5 hours of playing!

Plus there’s the whole climatic ending Darksiders has going for it and while the game is aged shall we say, for those of you who have never played the game, I’m not going to spill it for you. Just know that it is good, certain characters get their comeuppance. Also in the game, there is a character called the Watcher, who War is forced to work with and he has a very familiar voice. How so? Well he sounds just like the Joker from the Batman Arkham games and there’s a good reason for that, as the Joker and the Watcher both share the same voice actor and that actor is Mark Hamill! (Luke Skywalker is in the house!) And Mr Hamill isn’t the only notable voice actor Darksiders has to offer either, so not only is there epic story and gameplay all through-out, there’s epic voice acting as well.

Nevertheless though, it would be remiss of me if I did not admit the controls took a lot of getting used too. Due to the amount of time I have spent playing on my Switch, reviewing a lot of games for the console, I have become way too familiar with using the Joy-Con Controllers and Pro Controller, so when I played with the Wii U GamePad, it just felt huge and cumbersome, but I swiftly adjusted to it. What caused the most difficulty was getting used to the Wii U Pro Controller, it just felt completely wrong, but in case you’re wondering, this is relevant. Why? Well if you are like me and have a Switch, but are considering getting this game for your Wii U, you too will face this, but people adjust to things quicker than others and while there is a bit of a learning curve, it is only short in nature, so if this was something you were worried about happening, it doesn’t last long.

As for whether to buy physical or go for digital, buy the physical version. Both versions cost the same for Wii U and if you buy the digital version for Wii U, you can currently buy the sequel at a discounted price, but just know Darksiders Warmastered Edition requires a lot of space. (Over 14GB just to download it in Europe and then there’s save data to be considered as well.) But it is just a phenomenal game that is as good as the day it came out and a superb play on the Wii U, even if the graphic enhancements are less than those seen on other platforms. In fact there are a lot of great things about this game and although I could list them all out for you, I don’t wat to do that. If you have never given Darksiders the light of day before, than quite frankly I’d rather you get the game and discover them for yourself. (It really is that good of a game!)

Without a doubt, Darksiders Warmastered Edition is great fan service. THQ Nordic said they’d bring the game to the Wii U and the Wii U plays rather well indeed. The game’s story is rich and satisfying. The cut-scenes are engaging far and it is just an overall fantastic game to play, so with no further delays, I’m giving it an 8/10. Darksiders Warmastered Edition is just too good to pass up and since it is one of the biggest games to come to the Wii U not that Nintendo is no longer supporting the console with their own games, you would be a fool not to get it!