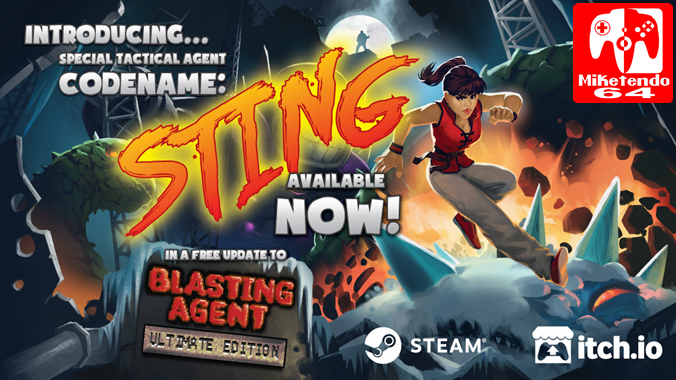 A Ratalaika Announcement: Wii U Support Comes to an End with Blasting Agent, in Favour of Nintendo Switch Desires

It’s no secret that Ratalaika Games are keenly interested in bringing a couple of their games to Nintendo Switch, but if their new press release update is anything to go by, it seems such a thing could be happening!

Sadly though, as their dreams of being a Switch dev seems to becoming a reality, they have announced their support for the Wii U platform has come to an end as a new content update for Blasting Agent: Ultimate Edition comes to both Wii U and 3DS today for North America, with the same update release on the 20th of April for Europe. There’s also a demo available as well and since the newly issued press release has all the details you could possibly need concerning the update, here it is:

We’re happy to announce that we’re finally launching the Blasting Agent: Ultimate Edition free update for Wii U and 3DS! It will be live today, April 13th, on Nintendo of America and next week, April 20th, on Nintendo of Europe!

Blasting Agent: Ultimate Edition will have a discount of 20% during the first week of the update! on both 3DS and Wii U eShop. And with this update, we’re also launching the demo versions for 3DS and Wii U!The demo version will include the 1st level of the game.

Lastly, from Ratalaika Games S.L., we would like to let everyone know that this will be the last content we’ve planned for the Nintendo Wii U platform.

After some deep thought we’ve decided to move on from it, the effort it required to adjust a game to it with the needed quality wasn’t matching what we were getting back from it these days.

This has been a hard choice for us due to it was the first console we worked on, but we wanted to move to other adventures on Nintendo…

With a tease such as that, and the relationship Miketendo64 does have with Ratalaika Games, obviously we got in touch with Ratalaika to see if they could elaborate on it. Now we’re not going to share the response in its exact wording, as we too rather take a cryptic approach, but let’s just say that Ratalaika may or may not have something to say about this later on this month. Take from that what you will.