Nintendo is Personally Handling the Distribution of Ultra Street Fighter II: The Final Challengers in Europe 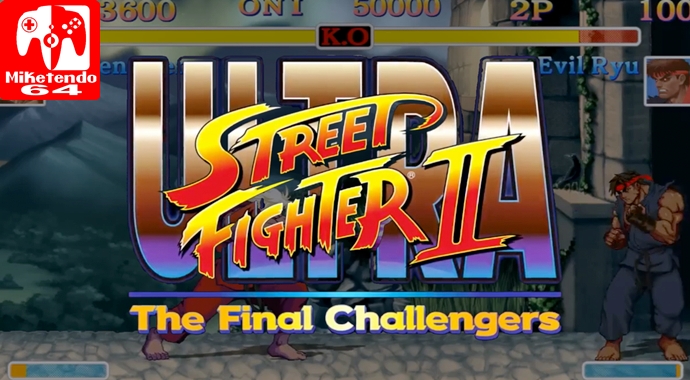 A little later on this year, Ultra Street Fighter II: The Final Challengers is coming to Switch and when it does, while Capcom are still publishing it, but as far as Europe is concerned, it has been revealed that Nintendo are in fact handling the distribution of the title in question, personally.

Although for some of you, this shouldn’t come as a surprise, given Nintendo’s relationship with Capcom, this is something that has happened quite a few times in the past, with regards to Ghost Trick: Phantom Detective, Monster Hunter 3 Ultimate, Monster 4 Ultimate and even Street Fighter IV 3D Edition, but it’s still interesting nonetheless and since we are covering Street Fighter on Switch, we may as well cover it in full detail. By that I do of course mean share the details from Nintendo’s newest and informative post that is heavily Ultra Street Fighter II focused:

Rekindle your fighting spirit at home or on the go when ULTRA STREET FIGHTER II: The Final Challengers arrives on Nintendo Switch on 26th May

5th April, 2017 – Relive the glory days and prepare to take on new challengers anytime, anywhere, when ULTRA STREET FIGHTER II: The Final Challengers – distributed by Nintendo throughout European territories and Australia and published by Capcom – launches at retail for Nintendo Switch on 26th May.

ULTRA STREET FIGHTER II: The Final Challengers takes players back to where it all began, and with a host of new control options, multiple game modes, online play* and the inclusion of Lite controls for newcomers, friends will be able to experience Street Fighter in a whole new way. When Nintendo Switch is docked and by simply removing both Joy-Con from the console, friends can fight for glory from the comfort of their living room, or put their differences aside and team up against the CPU in Buddy Battle. Nintendo Switch can be carried anywhere, empowering warriors to test their might in cafés, at train stations, and any other location to battle all-comers, simply by standing the console upright using the stand and handing a Joy-Con to an opponent.

On top of the 17 classic characters returning to compete in the second World Warrior tournament, powerful new additions Violent Ken and Evil Ryu both join the roster. Violent Ken, who has been brainwashed by M. Bison, and Evil Ryu, the form Ryu takes after succumbing to darkness, are perfect for those that like a highly aggressive playing style. Once players have selected their preferred fighter, they can enjoy a number of modes:

For those new to Street Fighter who are looking to level the playing field against more experienced players, there’s an option to switch between Lite and Pro controls. Lite controls let players perform special moves or super combos by either touching the touch screen or pressing a single button, whereas traditional Pro controls offer all the classic button inputs engrained into players’ muscle memory. The game also supports the Nintendo Switch Pro Controller, available separately.

Regardless of their experience level, all players can fight in style by using the Colour Editor to customise the colour scheme of their favourite character, giving them their ideal look. Enter the style settings and select between new high-definition visuals for a modern look, or select classic graphics and witness Street Fighter II just as it was in the arcades. Fight fans can relive their favourite local matches and show off their best combos to impressed passers-by with the replay feature. Take a break from brawling and visit the gallery, which includes over 1,400 highly detailed illustrations from throughout the Street Fighter series, taken from the out-of-print Street Fighter Artworks: Supremacy book. Rekindle your fighting spirit at home or on the go when ULTRA STREET FIGHTER II: The Final Challengers arrives on Nintendo Switch on 26th May.

As a reminder to our readers, while the title will course be available digitally, it will also have a physical release as well, so if you have yet to upgrade your system’s memory just yet, thanks to a sizeable micro SD card, buying the physical one is a sure fire way to avoid using up any precious storage space. But at the end of the day, it’s your money and your choice and that is where we’ll stick a pin in it!