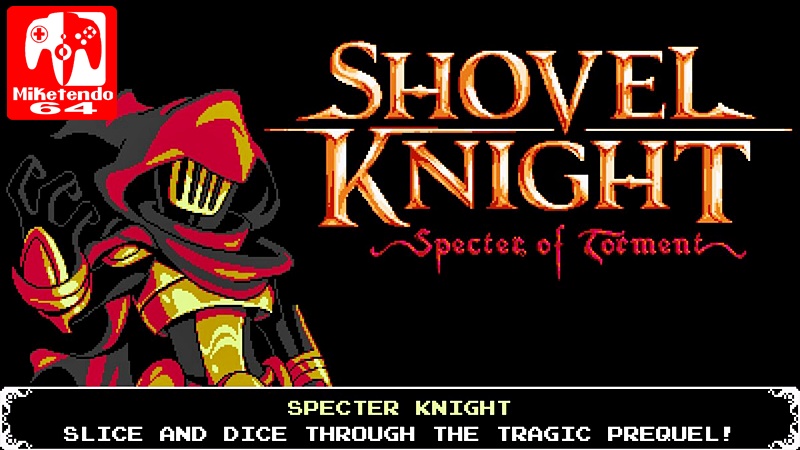 [Review] A Tale of Woe and the Birth of Specter Knight (Shovel Knight: Specter of Torment)

Available right now as a standalone title on the Nintendo Switch, Specter of Torment is the latest Shovel Knight related campaign to be released upon the world and it is good. So good in fact that I actually prefer it to the original Shovel Knight campaign (now called Shovel Knight: Shovel of Hope.) Don’t get me wrong, the original game is great, but as much as I enjoyed Shovel Knight’s story along with the throwback art style, the gorgeous level design and music, I wasn’t as much as a fan as the main protagonist as I could have been. But Specter Knight is a different story.

As a boss in both the Shovel of Hope and Plague of Shadows campaigns, he was the one who always gave me the most trouble. He was the Knight who I found the most interesting and now that he has his own campaign that sees him having his story told for a change, I grew to not just appreciate him even more so, but to greatly appreciate him. Sure his look is somewhat different as the cloak is not as long, and his fighting style is different, but he is a fantastic character with such a tragic tale.

All Spectre Knight wants to do is right a wrong. A wrong that can be seen played out during playable memories of a time when Spectre Knight was among the living, but being as though it is a prequel to Shovel Knight: Shovel of Hope, it means we already know how it ends. We know that despite all of his efforts throughout the game, it’s all for naught. There is no happy ending for him. His end is to become a loyal subordinate to the Enchantress, to do her bidding and leave all traces of himself and his old life, well and truly behind.

I have nothing but respect for this storyline Yacht Club Games has created, so dark, so tragic and so hauntingly beautiful, it is a great piece of story-telling and something that I feel does a great job of cementing Spectre of Torment’s place as being a true standalone title, whilst at the same time forever binding it to the world of Shovel Knight. However it’s not just the story that does a great job of setting Spectre of Torment apart, it’s the entire game.

Just like with Plague of Shadows, we are presented a new perspective and a protagonist who has his own unique playstyle and skillset. A skillset that sees Relics replaced with Curios that have all kinds of interesting powers and attacks that are now powered by magic, but by Specter Knight’s own inner darkness and then of course there’s his scythe. Spectre Knight is a formidable fighter and his Dash Slash is the ultimate fighting move! Why? Because once he starts his attack, he can keep on going, constantly lunging and slicing his prey, not to stop until they manage to land a hit on him, or his victim has met their end at his hand. He can also use this attack to latch on to lanterns and cannonballs and enemies, and propel himself upwards towards a ledge that was previously unreachable, or even downwards.

But let’s not solely focus on the action, let’s move on to the other changes Spectre of Torment has. Firstly, the overworld map is gone and replaced with a hub world, in which a range of characters can be encountered, including beings whom players can acquire new armour, Curios and Curios upgrades from. A challenging mini-game can be played and of course a large mirror can be found that serves as a portal that transports Spectre Knight to the various levels where he can encounter the Knights whom he is tasked with initiating into the Order of No Quarter. Levels that are very similar to the ones we’ve seen time and time again, but with some added new perks and design tweaks and lots of Red Skulls for us to seek out and collect that can later on be used to buy Curios. There’s also Wisps as well that can extend your Life (which in Spectre Knight’s case is called Will and is green in colour), or darkness depending on which chest find and should you fail to find a chest on a certain level, you can of course just buy it next time you’re in the hub world.

However since I’ve solely been focusing on the positives so far, it’s time I discussed a negative. The actual length of the content. As a great game with quite a bit to do, Spectre of Torment is nowhere as large as the previous titles as it is rather easy to clear the entire game within 5 hours and that includes collecting everything. Sure there’s a New Game+ but Yacht Club Games did something truly amazing with this Shovel Knight instalment and after all the time they spend working on it, I can’t help but be a little greedy and want some more Spectre Knight action, because this game really is a fantastic title.

In fact it is so fantastic that I would go as far as saying it is my favourite Shovel Knight campaign to date and that it is something of a thoroughly enjoyable masterpiece that plays absolutely brilliantly on all 3 of the Switch’s playable modes, so if you’re looking to play the ultimate Shovel Knight experience that you really can take anywhere, Spectre of Torment on Switch is a great way of going about that. So following that, I think it’s only fair I score Shovel Knight: Spectre of Torment a 9/10 because it really is that good. However since it is a game that will be coming to all other platforms as part of a free update, it would be remiss of me to not point out that there is no point buying this addition if you already own a copy of Shovel Knight. But if you have never played a Shovel Knight and do own a Nintendo Switch, then as far as available games go right now, then Shovel Knight: Treasure Trove is the perfect game to buy, since it offers the Shovel Knight experience everyone else has access to already and has Gender Swap, new amiibo functions and of course, the Spectre of Torment campaign. At the end of the day though, the choice is yours!