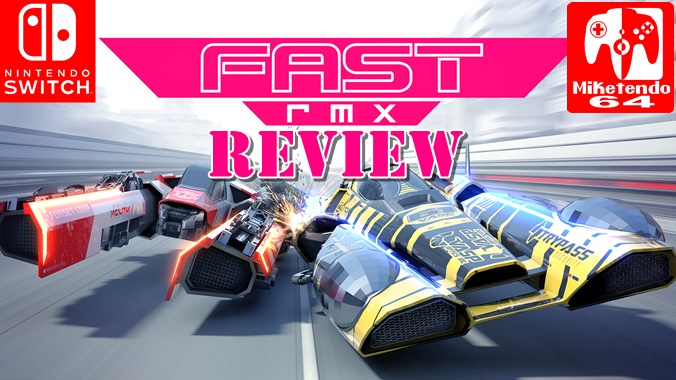 Hi there, I’m Jack Longman, the Editor-in-Chief of Miketendo64 and armed with a Nintendo Switch to call my own, Miketendo64 is now putting out Nintendo Switch related reviews to match all our other Switch content! Having already reviewed The Legend of Zelda: Breath of the Wild, it’s time to review another of the Switch’s launch titles! Join me as I review FAST RMX!

Developed by Shin’en Multimedia, FAST RMX is something of a controversial title. Controversial purely because almost no one knows what to really define it as? Is it a sequel? Or is a remixed remaster of FAST Racing NEO? According to the Wikipedia, FAST RMX is a true successor and third game in the FAST series, but I wasn’t willing to accept that for an answer. So for the purpose of this review (big thanks goes out to Shin’en for supplying me with a Review Key,) I asked Shin’en flat out how do they define the game, and the response is an “Extended Remix of FAST Racing NEO” and now that we’ve got that out of the way, we can properly begin the review.

Just like the previous FAST titles, RMX is a futuristic racing video game, except instead of being on the likes of the Wii U like NEO is, RMX is a Switch launch exclusive title that fully supports single Joy-Con play, the Switch Pro Controller, Motion Controls, HD Rumble and can be played in handheld mode. Although for the true immersive experience, it is much better to play on the big screen as console mode (TV) enables the game to run at 1080p at 60FPS.

Being as though it is a racing game, there is no story, just high octane racing all across the planet as there are plenty of tracks to try out and drive at full speed and if you don’t feel like racing against the CPU in the main campaign, why not try out the multiplayer options? Both local and online play allows up to 8 players at one time supports split screen for up to 4 players on one Switch. But should multiplayer fail to offer you a challenge, there’s always Hero Mode which does offer something similar to an F-Zero experience, what with its particular gameplay, higher difficulty and interesting challenges.

But even then Local Online Multiplayer isn’t the only piece of new content that RMX has compared to NEO, because by being an extended remix, it has all of the racetracks first seen in NEO, along with the dlc tracks, plus new tracks to call its own. However those old tracks are not the same as we remember them as, they have been reworked to make them even more stunning, as better visuals have been added and gameplay has been revised.

Also added to the game in the way of new content is new graphic controls options such as Chromatic Aberration and Dynamic HDR, but there’s also full touchscreen support for the Menu Screens, new custom control options and the Switch owner’s user image is displayed during online races and if you’re worried that’s all the content this game has to offer, worry not for more is on its way. Just like NEO, Shin’en intend to support RMX with updates that will bring new content such as Time Attack and Online Friend Support. (Both of which have already been confirmed to be added to the game very soon.)

As for the actual gameplay itself, the same rules apply. Go fast, finish first, watch out for hazards, try not to be taken out by opposing racers and don’t forget to phase change when you need to. Now all of that sounds simple, but it’s not because while you may be first, your opponents will be faster, especially when they’re driving one of the 15 vehicles you don’t even have access to and their acceleration is far superior to yours and even if you can wipe them out at the right time, you will always need to watch your six, because even when the end is in sight, a second place opponent could zoom out of nowhere and take you out.

Fortunately destroying your vehicle doesn’t result in immediate elimination, as you’ll soon respawn and there are no limits on respawning, but if you must get killed, or wipe yourself out, try to do it in any lap other than 3. More often or not, dying on the final lap usually sees you failing to finish in the Top 2 (although that could just be me.) Whereas dying in the first or second lap, still gives you plenty of time to reclaim your lead or just take it for the first time.

For anyone who has played NEO on the Wii U and are wondering if RMX is worth getting on the Switch, the answer is “yes.” RMX isn’t just an extended remix of NEO, it is a much sharper and better looking version. With breath-taking visuals and more content than before, RMX offers some very fast driving, RMX is an evolved version that can be played anywhere, anytime with anyone, so even if there isn’t a room-mate, a family member or even a partner who will play with you, a stranger on the bus might.

So sure it might not be a true third instalment in the FAST series, but it is a great title nonetheless, so definitely pick it up if you’re looking to add a racing game to your collection of Switch titles. Sure you could wait for April to come and get Mario Kart 8 Deluxe instead, but just remember the two games are not the same and if the difference is not obvious, then it’s fair to say you’re a Mario Kart race fan, as opposed to being an F-Zero race fan. But in short, FAST RMX is a true to form racing game that is just as serious as it is fun and because of that I score it a 9/10 so great job Shin’en! You made a great game even better!