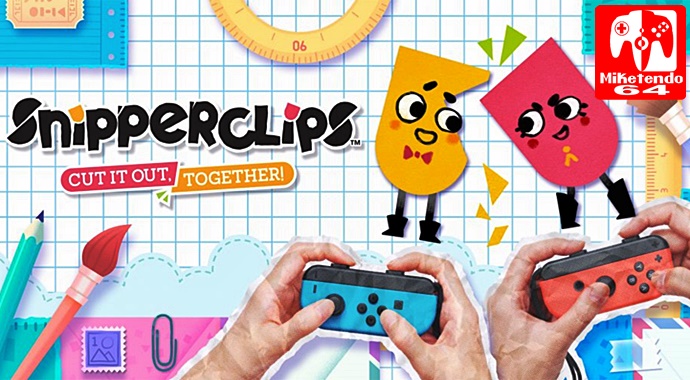 Snipperclips Will have a Playable Demo, Available as a Special Bundle & Launches in all Regions on March 3rd

Since learning of Snipperclips for the Nintendo Switch, while we did get to learn a good deal about it, there was a lot we didn’t, but that changed today.

Thanks to various new announcements from Nintendo’s different regional offices, we now know the title is be available from the Switch eShop on the 3rd of March and if players are unsure if it is a game worth getting, there will be a demo available for players to download and try-out. It will also be available as part of a limited edition bundle that includes Joy-Con Controllers.

Below you can find the official announcement/details as announced by Nintendo UK:

Fun comes in many shapes, as Snipperclips arrives on Nintendo eShop for Nintendo Switch on 3rd March:

24th February, 2017 – When it comes to solving puzzles, it’s often said that two heads are better than one, and families and friends of all ages can put that to the test by giving Snipperclips – Cut it out, together! a go when it launches on Nintendo eShop for the brand new Nintendo Switch console on 3rd March 2017. A special limited bundle containing two additional Joy-Con and a download code for the game will also become available at retail from 10th March.

Snipperclips arrives as a launch title for Nintendo Switch, the brand new console by Nintendo that transforms to suit players’ situation, allowing them to enjoy their games anytime, anywhere, with anyone.

A breakout hit at Nintendo Switch hands-on events around the world, Snipperclips is a charming puzzle game that encourages players to communicate, cooperate and think creatively in order to overcome the various brain-teasing challenges on offer. When playing together, each player will hold their Joy-Con horizontally and cut each other’s paper characters, Snip and Clip, into new shapes to solve all sorts of puzzling situations.

Developed by London-based indie developer SFB Games in partnership with Nintendo, it requires up to four players to work together – or compete against each other – across three main game modes: think creatively to puzzle your way through a World of fun (1-2 players, co-operative), invite more players to join and get a Party started (2-4 players, co-operative), or go up against each other in a frenetic, fast-paced Blitz match (2-4 players, competitive).

Those looking to share the joy of puzzle-solving with additional friends or family members can check out the special limited Joy-Con bundle coming to retail on 10th  March as well, which contains a set of two coloured Joy-Con (neon red/neon blue), along with a download code for Snipperclips. Players will surely soon discover that not just two, but three, or even four heads can be better than one!

Additionally, Nintendo Switch owners will be able to try out the game free of charge**, as a downloadable demo version will be available on Nintendo eShop from 3rd March. From launch, players will be able to download the demo directly from the newly-updated Snipperclips – Cut it out, together! website.***

How will your powers of co-operation and puzzle-solving shape up? Find out on 3rd March, when Snipperclips – Cut it out, together! launches on Nintendo eShop for Nintendo Switch for £17.99/€19.99/$19.99. A special limited bundle containing a pair of Joy-Con and a download code for the game will be available from 10th March.

I’ve got to say, that limited bundle offer sure is tempting. Will any of you be picking it up?