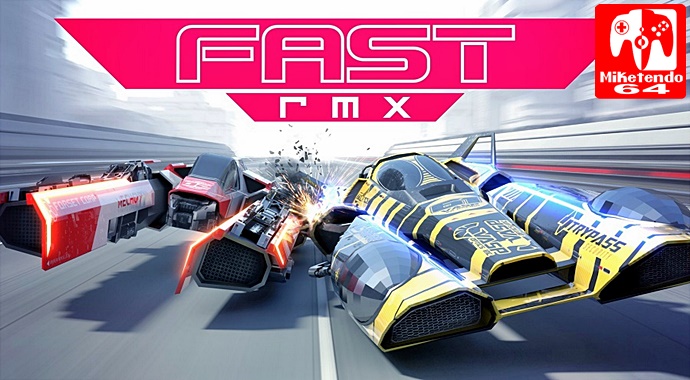 FAST RMX Will Cost $19.99 and Releases on Switch on March 3rd

Bring FAST to the Nintendo Switch:

“It was at the meeting with Nintendo when we got introduced to the Switch. Everyone realized FAST was simply a perfect candidate for the Switch. It would use all the new tech of the Switch and Nintendo already knew and loved the original the Wii U game. They were pretty happy we decided to bring it to the Switch.”

“First of all we were able to drop all the tricks that we needed to make FAST Racing Neo run at 60fps at all. So the image quality of FAST RMX is much higher then FAST Racing Neo. We also improved the rendering resolution from 720p to 1080p. We also took this chance to create a complete new user interface to make better use of the higher resolution. This new user interface is even quicker and more responsive then the original which is a perfect fit for a racing game. Most of the tracks from the Wii U version got improvements for better lighting and more special effects. We also added a new GRAPHICS option to the Pause menu. There you can toggle effects like ‘Dynamic HDR Exposure’ and ‘Chromatic Aberration’. The first one allows a much higher dynamic range of brightness on the screen. You have to see it in action. It makes the game much more lifelike. The 2nd effect emulates how real lenses work on cameras and gives a nice touch of realism to the image. All these additions were not in the demo version that many people already played, because the demo was created last year.”

Bring FAST to the Nintendo Switch:

“It was at the meeting with Nintendo when we got introduced to the Switch. Everyone realized FAST was simply a perfect candidate for the Switch. It would use all the new tech of the Switch and Nintendo already knew and loved the original the Wii U game. They were pretty happy we decided to bring it to the Switch.”

“Our goal was to deliver always 60fps, no matter if console or mobile mode, and no matter how many players in splitscreen. To achieve that we render in 1080p @ 60fps with dynamic resolution scaling. So we always have the perfect balance of high frame rate and maximum graphics quality.”

“We have a massive number of 30 tracks, and each track has its own setting. So it’s like 30 tiny worlds to explore. And we really mean ‘worlds’ because each track is so unique. We also have 15 anti-gravity vehicles to unlock and 10 cups to complete. So even when you come from the original Wii U eShop version you will experience almost twice the content!”

“HD Rumble is really cool. I think FAST RMX is one of the first games at all that makes use of it. HD Rumble gives you the impression you are really ‘on the track’. You feel when you bump into something, and you really feel ‘where’ it happened in regard to your vehicle. You could even try to close you eyes and play blind just by that feedback. You also recognize just by HD Rumble feedback if you drive over a jump-pad or if you get propelled by a boost-pad. We think its really something novel and that’s a lot to get more immersed.”

“HERO MODE is our reference to the excellent F-ZERO games and it’s nothing for the faint hearted. In this mode your boost energy is also your shield energy. So you need to play very different then in the normal mode. The boost pads will also load up your energy just like in F-ZERO. We hope this mode will be a great extra for all the players that remember how hard games were decades ago but also how satisfying it was to win!

In FAST Racing Neo we added the HERO MODE as a late unlockable, but we realized that many players want that extra challenge right from the start. So when you finish the first cup you can hop right into it.”

“Of course we have again an online mode with up to 8 players included, but we also added a local multiplayer mode!

Up to 8 Nintendo Switch systems can also join into a local multiplayer match, with each player owning a copy. When testing that mode at Shin’en it was simply no work, we had too much fun with it!”

“We are happy to announce the price for the game here at Nintendo Life. FAST RMX will cost only 19.99 USD/EUROs! Grab it at launch!”

For the full Nintendo Life/FAST RMX article, click on the link below: