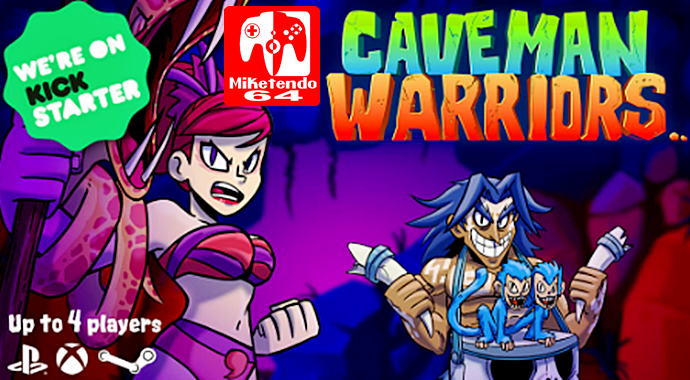 Caveman Warriors Kickstarter Campaign is now Underway! (Wii U & Switch Release is not Ruled out)

The game that took our breath away was Caveman Warriors by JanduSoft and we must have played it for an hour because it was so good. We also interviewed the developers about it and when we first spoke, they expressed a huge desire to bring the game to both the Wii U and the NX, (which would later on that month be revealed as the Nintendo Switch) and that desire is still present, but we’ll get to that in a minute.

JanduSoft now have a Kickstarter campaign underway for Caveman Warriors, which provides a ton of details not made to the public previously, so below you can find a brief overview, complete with game features and story:

Jump back in time and free your inner caveman. Smash heads in this local cooperative platformer game. Play solo or team up with up to 4 players. Inspired by games like New Super Mario, Joe & Mac and Trine.

What could go wrong if an alien gets attached to your babies and decides to take them away without their parents’ permission? Embark on this exciting caveman adventure of smashing, growling and jumping along the game and rescue your critters from these extraterrestrial claws!

As a Kickstarter, Caveman Warriors requires funding and right now they are asking for a total of $10,000 dollars and there are 29 days left on the clock to raise such an amount. While there are no current stretch goals, one will be added soon enough and if the additional amount is reached, JanduSoft aim to bring the game to Wii U, Nintendo Switch and PS Vita, as well as the other platforms Caveman Warriors is already confirmed for.

For anyone wishing to get to know Caveman Warriors a bit better before they consider downloading, additional details can be found by visiting the Kickstarter page by clicking on the link below and downloading the playable demo:

Lastly, because we were given a heads up about the campaign, by JanduSoft’s Jose A. Andujar, we had the chance to send over some interview questions and we will posting the responses very soon, so as far as Caveman Warriors is concerned, expect to hear more about it here at Miketendo64.