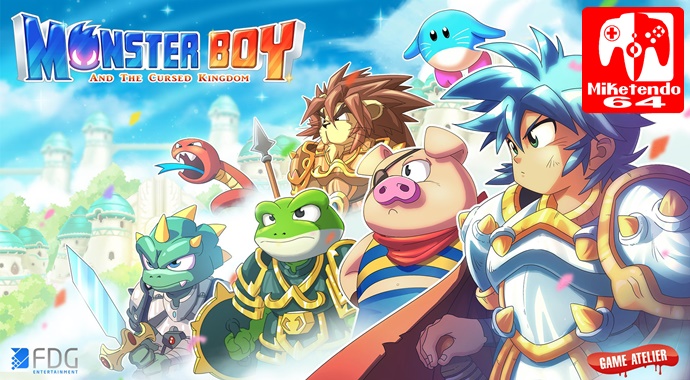 Making its way to Miketendo64 this week, is our Monster Boy and the Cursed Kingdom interview, but since we do like our spoilers, allow us to give you two reasons why you should check out our upcoming Switch interview:

Miketendo64: “While Monster Boy and the Cursed Kingdom is coming to a few platforms, (Nintendo Switch included,) are there any version exclusives and will Monster Boy be taking advantage of the Joy-con Controllers HD Rumble feature and the Switch’s touch-screen?”

Philipp Döschl: “We will decide this a bit later. We still have to do a couple of things before the game runs properly on Switch. Once it does, we will look into which Switch features we will support.”

Miketendo64: “Previously on Twitter, FDG Entertainment expressed an interest in doing a co-op mode. Just how exactly would such a feature work and how long exactly would it be before we could see the co-up update released?”

Philipp Döschl: “A co-op mode is one of many ideas we have in order to add more to the game after its release. It’s too early to talk about such a feature or even confirm it, as many things have to be taken into account for such a mode. Right now we’re focusing on polishing the game and finishing it up for release.”

We hope you look forwards to our complete Monster Boy interview.