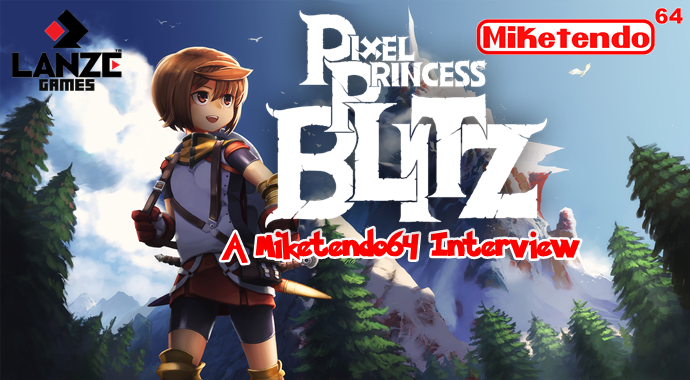 Be it Sport, Action or RPG, there is a genre for every kind of gamer, and if you’re the kind of gamer who really enjoys sandbox rouge-like action RPGs, than Pixel Princess Blitz is a game that will appeal to you. But instead of telling you about it, I’m going to share a trailer:

Only thing is, if you have fallen in love with this game, it’s not out yet. It won’t even be out for a while and unless it gets your support, there is a chance it won’t even reach its Kickstarter campaign goal and honestly that would be a shame! Pixel Princess Blitz is an interesting title and it’s a title Lanze Games have expressed an interest in bringing to the Nintendo Switch. So to give this game the best kind of support we can, we wanted to give it the coverage it deserves and interview those behind the game, to learn more about it.

Get ready for another “A Miketendo64 Interview,” as this time we’re talking Pixel Princess Blitz with Hepari:

Miketendo64: “First and foremost, who are you? What is your involvement with Pixel Princess Blitz and can you tell us a bit about Lanze Games?”

Hepari: “I am Hepari, the founder and lead creator of Lanze Games. I design the game’s mechanics, design characters and every art asset including the UI, except from the character pixel art; I’m also responsible for writing, PR and SNS.

Initially started out as a two-man team with a programmer in 2014, Lanze Games has seen drastic changes in its composition while putting out two games in two years. In 2015, however, I came to the conclusion that the mobile market is a harsh place for indie developers to survive.

That was when I left the mobile platforms, and instead decided to make a good, lengthy game with high replayability that wouldn’t have to rely on ad revenue or in-app-purchases. The team was reorganized around a new project named ‘Pixel Princess Blitz’. Right now, I’m working with an amazing team of one programmer, two pixel artists and a composer.”

An Introduction to Pixel Princess Blitz:

Miketendo64: “For our readers who have yet to hear of PPB, in as many words as you want to use, what is PPB and what kind of game is it?”

Involuntarily caught in the middle of the chaos sweeping across the lands, you will get the opportunity to shape the fate of a realm.

Once I delve into details, I wouldn’t be able to stop any time soon, so I’d like to keep it short. You can expect the following:”

“If these have piqued your initial interest, please visit our Kickstarter page to learn more about the game (and to read the comic! I assure you, it’s very enjoyable.)”

*Having seen the comic myself, it is rather good, so you can find a link to the Kickstarter campaign right here and a quick taste of the comic beneath the link:

Miketendo64: “Where did the inspiration for Pixel Princess Blitz come from and how long have you been working on it?”

Hepari: “The inspiration came from various games, such as FTL: Faster than Light, Diablo 2, The Legend of Zelda series and Pixel Dungeon.

I had finished the first concept early 2015, but it took a long time until our team was more or less complete. I’d say we have been working on PPB a year and a half now.”

“You can’t just point at another game and say ‘Let’s copy this:’”

Miketendo64: “How is development on Pixel Princess Blitz going?”

Hepari: “It’s going pretty well. The core systems are mostly in the place; the main character’s movement set is pretty much complete, and we have already over 20 working enemies (This is only a small part of the enemies planned for the finished game).

Most people in the indie dev scene would agree on that making it to an exhibitable state is the hardest part of any game project. This game is very experimental in a myriad of ways, as an indie game well should be, and building something entirely new is always hard. You can’t just point at another game and say “Let’s copy this.”

We made it through that bone-grinding first half, and are progressing at a steady pace. And once we have secured the budget with the ongoing Kickstarter campaign, we’ll be able to push it further even more.”

Miketendo64: “Well best of luck to you guys!”

Hepari: “Bringing the game to all the possible consoles and handhelds was something we had already decided on before Nintendo Switch was even announced. And that’s why we have designed all aspects of our game with multiplatform in mind. (There was also a plan for a mobile version, but it required us to dumb down the controls, so mobile devices were scratched off the plan.)

For example, unlike many other pixel-art-driven games, we don’t use any pixel-art in the UI; it’s all painted by hand, in Quad Full HD resolution. It makes adapting to the displays of different devices much easier, since we can scale it down without losing quality, which isn’t possible with pixel-art style UI.

We just want to bring our game to as many gamers as possible, and since Unity has officially announced to support developing for and porting to Nintendo Switch, there was no reason for us not to consider it.

By the way, console ports are ‘not’ on a stretch goal, since it’s something we’d like to do anyway, and it doesn’t add value to the actual game, when you think about it. We will cover the costs that arise from porting with post-release revenue.”

Miketendo64: “Thank you for the clarification.”

Making the Most of Pixel Princess Blitz for Each Platform:

Miketendo64: “Should you prove successful in bringing Pixel Princess Blitz to the Switch, will it be the same game available on other platforms, or would you attempt to make the game take advantage of the Switch’s touch-screen and Joy-con capabilities?”

Hepari: “Even before we heard about Nintendo Switch, we’ve been designing with different control systems in mind, including touch-screen.

With the touch-screen, actions such as inventory navigation and the sector-map movement could be much easier than using only the controller. We will definitely take advantage of everything that improves the player’s overall experience, and neglecting to do so would kill the purpose of porting in the first place.”

Miketendo64: “Are there any plans to create a playable demo and if so, when can gamers hope to see one released?”

Hepari: “I plan to release the playable demo to the public, optimally within two months after PPB is funded. Being the prologue to the main game, it is like a miniature version of the finished product, and has a suitable ending that will leave you anxious to experience the rest of the story.

The reason we don’t have a playable demo is this: Pixel Princess Blitz’s goal is simulating a world with a multitude of systems that don’t work without one another. To demonstrate the full vision of our game, we have to finish every core system, fill it with enough content and finally polish it.

When you are serving a five course meal, you can cook one dish after another. You can start with serving the appetizer, and nobody would complain. But setting up a buffet is completely different. If you don’t have every promised dish ready, you would become the laugh of the hour.

It was either launching the campaign or seeing the project nearly grinding to a halt, and I apologize for the wait.”

Miketendo64: “Lastly, since this is a game with an active Kickstarter campaign, how is it going and can you tell our readers more about it?”

Hepari: “It’s going rather smoothly. We are now on our twelfth day since the launch, and we are already at 60%, thanks to the generous pledges and support of backers. Many like the introductory comics on the Kickstarter page, with the animated game footages in the background.

For the whole week before the launch, while I was still busy with the preparation of the page and the trailer, I was accompanied by this winter’s nasty flu. Still managing to launch on time as announced, and receiving a warm feedback is quite gratifying.

The campaign will be successful if we can reach the goal of 77.700 EUR by February 8 (in the US). This goal is a bare minimum of the funds we need to complete the game, so it would be great to surpass it even by a small margin.

To the readers: Even if you are short on funds yourself, or not interested in backing at all, I’d be very grateful if you’d have a look at the page. I’m sure you will enjoy reading the comic strip, at the very least.”

While it would be nice for Pixel Princess Blitz come to multiple platforms, at the end of the day I run a Nintendo news site and own Nintendo platforms, so even if the Xbox release doesn’t work out, as long as this game is able to release on Switch, I will be delated, because this is a game worth talking about and a game worth playing. And since I’ve said enough, it’s back to Hepari for the final word, a message for the fans and our readers:

“I know that a number of incidents in the gaming scene has rebuffed gamers and made them highly sceptical towards game projects that seek crowdfunding platforms or enter Early Access. I also have been burned several times myself, and I know we gamers have every right to be doubtful.

But please understand that more often than not, crowdfunding is the only way for small indie developers to realize their dreams without throwing away their life.

And when they finally announce their project on Kickstarter, and show you at least some polished footages instead of just a well-drawn mock-up, you can safely assume that the developer has most likely gone through hell, and is reaching for a rope to get out – A rope made of your generosity.

That’s why I’m all the more grateful to every backer who has taken risks and decided to support Pixel Princess Blitz. Should this project be successfully funded, I promise that I will make every single penny count to finish the game, and hopefully assist in restoring your faith in indie developers.

Finally, I thank Miketendo64 for this interview!”

And thank you Hepari, but since this is the end of the interview and I’d really like to see you guys meet your goal, I’m going to share the Kickstarter campaign link one more time and the game trailer I shared near the beginning of this interview. Best of luck guys, I look forward to playing and reviewing it on the Nintendo Switch! (Fingers crossed.)