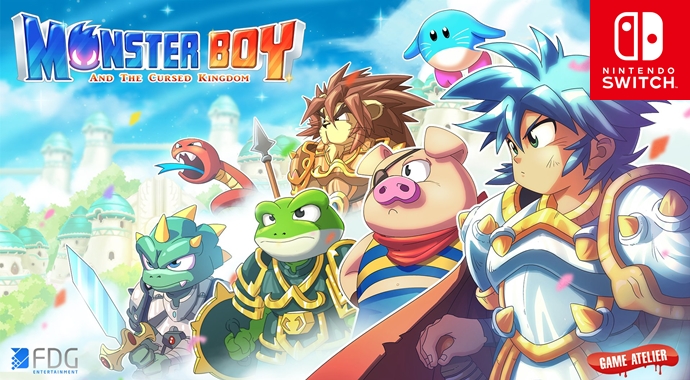 Update on Monster Boy for the Nintendo Switch (Jan 15th)

While Oceanhorn has yet to be officially confirmed for the Nintendo Switch (only teased at the point), FDG Entertainment’s Monster Boy is confirmed and some new details have come to light.

While the details are nothing major, at least it is something we know as fact, so to get the first piece of news out of the way, there will be no retail release of Monster Boy and the Cursed Kingdom when it releases. FGD Entertainment would love to retail release it, but at launch it just isn’t possible for a small company, but should the game do very well, a retail release could happen later on down the line.

We release it as a digital game but depending on its success more options could open up later!

But that’s not all, because FDG Entertainment had more to say on Twitter, such as the fact that they are considering doing an update to include local co-op but it will not be a Day 1 feature and as for the release of the Switch version, here’s what they had to say about that:

For anyone looking to buy the FDG Entertainment published and Game Atelier developed Monster Boy and the Cursed Kingdom, as well as Switch, it will also be releasing on PlayStation 4, Xbox One and Microsoft Windows. But should you feel you don’t currently know enough about the game, perhaps this Wikipedia overview and a trailer can correct that:

“The game casts players in the role of a boy named Jin, who must stop his crazy Uncle Nabu from using magic to spread chaos across the kingdom. Taken its influences mainly from the 1989 game, Wonder Boy III: The Dragon’s Trap, the game is an open-world side-scrolling adventure game in which the player must battle enemies and solve puzzles in order to progress through the story.”