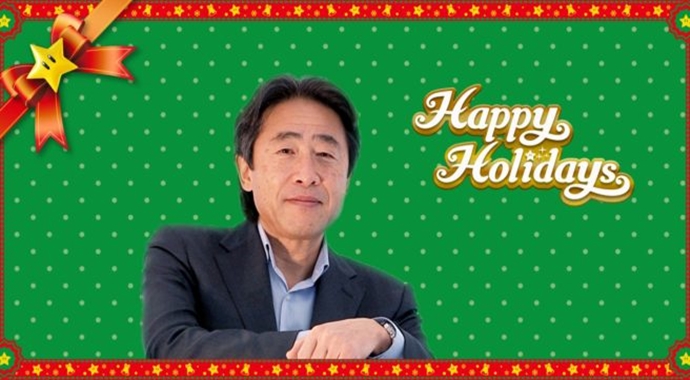 A 2016 Holiday Message from Satoru Shibata

Last year, President of Nintendo of Europe Satoru Shibata gave a Holiday Message that summarised the year and this year he has done it again.

Getting a mention in this message is the likes of Yo-Kai Watch, Pokémon GO, Pokémon Sun & Moon, Mario’s appearance during the closing ceremony of the 2016 Summer Olympics, Super Mario Run, and the NES Mini. He also brought up the Nintendo Switch, but only to say it is releasing in a few months time. For anyone wanting to check out his message in full, either click here, or scroll down:

“Hello everyone! This is Satoru Shibata from Nintendo of Europe.

I would like to thank you all for once again giving Nintendo your support over the past year.

For me personally, it has been even more exciting working at Nintendo than usual!

The first highlight was the launch of YO-KAI WATCH, which was well received in Europe and enjoyed by many people. I was happy to be able to make you all smile with my Yo-kai dance, which I practised for three days before the Nintendo Direct.

Pokémon GO was a hit all over the world, and thanks to that we received a lot of attention. Even some of my friends from outside of work told me how much they were enjoying Pokémon and how well Nintendo seemed to be doing!

There’s also been the Nintendo Classic Mini: NES. I’m very sorry that we weren’t able to supply enough of them to meet demand. However, the release has been a great chance for everyone who used to play Nintendo games from this time to reminisce and share their experiences.

Of course, who could forget Mario’s appearance at the 2016 Summer Olympics Closing Ceremony? I’m sure you were all surprised. I certainly felt proud to be working at Nintendo, the company that created Mario; a character recognised the world over, and held up as part of Japanese culture.

It was also incredibly exciting to see the enthusiasm at the Apple event when we announced that Mario would be appearing in his first-ever mobile game – Super Mario Run.

And in just a few months, Nintendo Switch will be released. Please look forward to it.

I wish you all a happy holiday, and happy gaming!